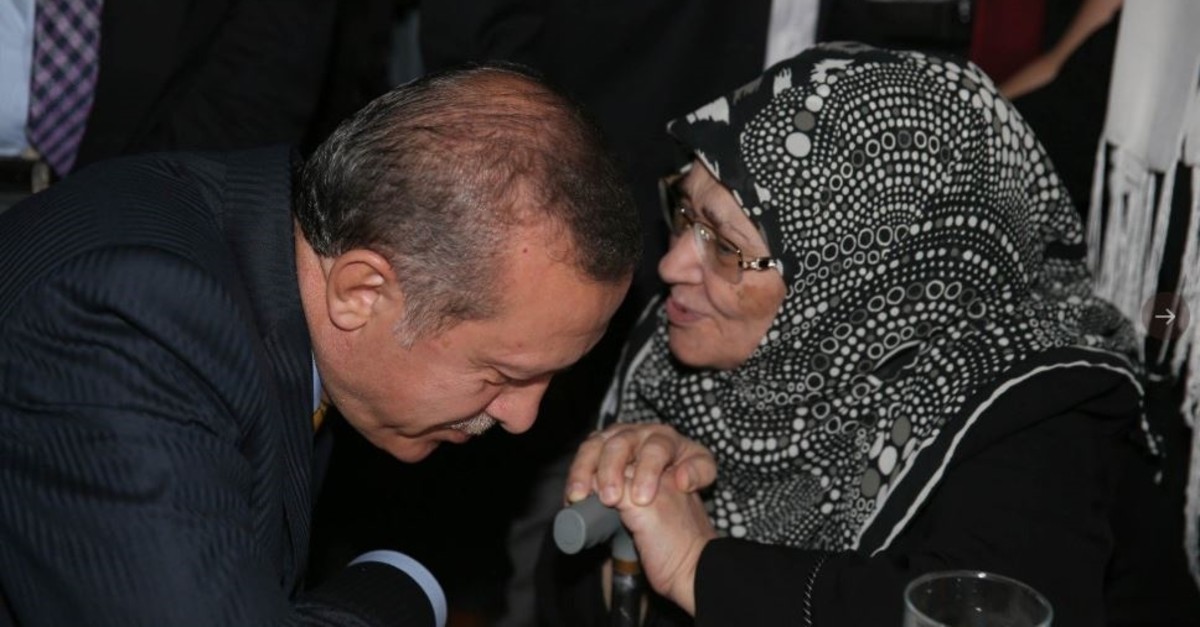 President Recep Tayyip Erdou011fan listens to u015eule Yu00fcksel u015eenler in this undated photo. The president described u015eenler as ,a pioneer, and ,a valuable writer who devoted her life to raising consciousness among the youth.,
by daily sabah Aug 29, 2019 12:06 am

Şule Yüksel Şenler, one of the most renowned names in Muslim women's struggle for religious freedom, passed away yesterday at the age of 81

Writer, journalist and activist Şule Yüksel Şenler, a figure credited with introducing the modern headscarf to generations of Muslim women and known for her work for a more active role for Muslim women in society, passed away yesterday at the age of 81. Doctors at the Istanbul hospital where she has been in intensive care for about five months for congestive heart failure announced that she died of a septic shock. For younger generations, Şenler is known for her novel "Huzur Sokağı" ("Peace Street"), which was recently adapted into a popular TV drama.

For popular culture pundits, she was the writer who introduced Emine Erdoğan to her future husband, President Recep Tayyip Erdoğan. Şenler was, of course, more than this and left her mark in the history of Muslim women in modern Turkey with her writings and unflinching activism that landed her in prison.

She was born in 1938 in central Turkey's Kayseri to a relatively secular family, who later settled in Istanbul. Şenler dropped out of school and had to work when her family went bankrupt and her mother ailed. She worked as an assistant to an Armenian tailor after leaving middle school, an experience that later led her design of a new type of headscarf for conservative women.

Nevertheless, she found her true calling in writing. She was only 14 when her stories were published in Yelpaze magazine. It was also the writing that led her to adopt "Şule" as her first name as Yüksel was a unisex name and she wanted to highlight her gender.

She was in her 20s when she started penning articles in the Kadın (Woman) newspaper. Though a conservative woman, she was not a practicing Muslim up until her 20s and would later credit her elder brother for introducing her to her new lifestyle. Her brother's advice to read "Risale," a popular book by prominent cleric Said Nursi, changed her life and she started covering her head and performing prayers in the 1960s. Her life would also take another direction in those years when she joined Yeni İstiklal newspaper, where she faced a barrage of lawsuits for her articles.

Şenler was a new voice for Muslim women in overtly "secular" Turkey where Muslim women were shunned in social life and faced a dire choice of either downplaying their religious views or risk criticism and worse by wearing a headscarf. Her articles and a series of conferences in the 1960s and 1970s helped shape the identity of well-educated Muslim women who increasingly took to wearing the headscarf. The headscarf issue that would haunt Muslim women for decades to come and led to their persecution, was Şenler's most renowned cause. So much so, women choosing to wrap their headscarf like her would be called "Şulebaş" (Şule head).

She pioneered a new path for women in headscarves with her journalism work as she was one of the first headscarf-wearing journalists in Turkey. Amid her busy schedule, she still found time to publish a magazine with her brother where she drew headscarf and long coat designs for Muslim women. Her designs received overwhelming interest among young women in Anatolia who increasingly took up wearing headscarves to schools. Years later, headscarf-wearing women would be banned from universities by the country's secular elite.

Her activism for women naturally drew the attention of authorities which did not tolerate a headscarf-wearing woman influencing the masses. "Those behind [the increasing number of] covered women on the streets will be punished," President Cevdet Sunay bluntly said in 1971. Şenler, in response, penned a letter to Sunay and called him to apologize to "Allah and the nation." She was charged with insulting the president and was jailed for eight months. Sunay issued a pardon for her two months into her sentence but she refused and served the full term. She resumed her conferences after release and served as a journalist in several newspapers up until the early 2000s. She battled age-related diseases over the past 15 years.

Her books include "Suffering of the Youth," "What Happened to Us?" "Woman in Islam and Today," "Tears of the Civilization," "The Girl and The Flower," but her most famous book was the novel "Peace Street."

The novel, telling the story of a young woman falling in love with a pious man and finding religion in the process was a bestseller and was adapted into a popular film "Crossroads" in 1970. The film was adapted into a TV series under the book's original name in 2012 and again, proved popular among modern audiences.

President Recep Tayyip Erdoğan issued a condolence message on Twitter, accompanied by his photo with Şenler. "I learned with great sorrow the passing of Şule Yüksel Şenler, a pioneer in the headscarf struggle, a valuable writer who devoted her life to raising consciousness among the youth. May Allah bless her soul," Erdoğan said.