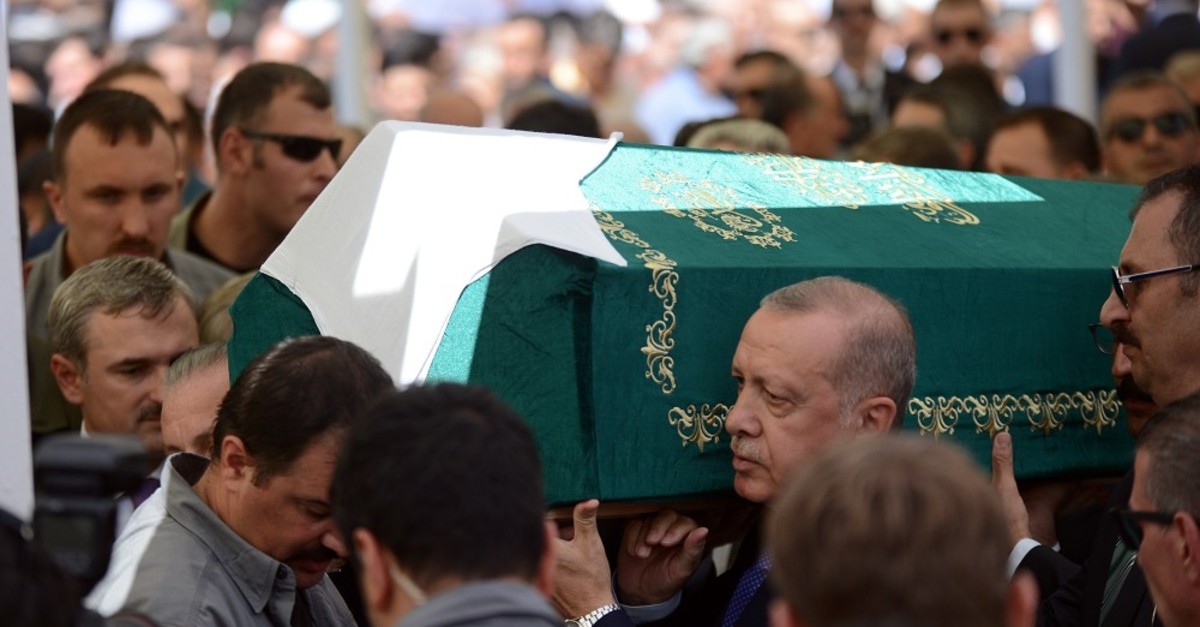 In the small courtyard of Istanbul's Eyüp Sultan Mosque, hundreds gathered yesterday for funeral prayers for Şule Yüksel Şenler, a writer and journalist known for her resilient activism for Muslim women's rights. A large portion of the crowd consisted of women wearing headscarves who were there to bid farewell to a woman who inspired them in their lifestyles and activism. President Recep Tayyip Erdoğan was also among those who attended the funeral prayers.

Şenler died at the age of 81 on Wednesday after a life on the road for conferences crowned with books and newspaper columns dedicated to her cause.

That cause was making Muslim women more visible in social life without fearing persecution for simply wearing a headscarf. It was not a small feat in a country where an extremely secular and warped mindset reigned. It was a cause that landed her in jail but inspired defiance among headscarf-wearing women who would face a witch hunt for decades to come when they sought to exercise their rights.

"She was a lady who left her mark in history," Ravza Kavakçı Kan, a lawmaker from the ruling Justice and Development Party (AK Party), told Anadolu Agency (AA) at Şenler's funeral. "She was known for standing strong and she was always elegant and carried herself with grace. She was a headscarf-wearing woman leading a struggle at a time when no one could dare such a struggle for women's rights. She paid a price for it and was jailed," she said.

Şenler's biographer Demet Tezcan said Turkey lost a very valuable figure who hit the road at the age of 27 for her cause. "She was a person who used her wisdom and oration skills for the cause of Allah. She is an irreplaceable person," Tezcan said.

Writer, journalist and lawyer Sibel Eraslan said Şenler was a fighter who fought for her cause without the support of any nongovernmental organization (NGO) or political party or money and raised multiple generations by teaching them "how mortal this world is."

"She was a symbol of resistance and resurrection. Resurrection was inviting people to spiritual enlightenment. Resistance was the resistance against restrictions she faced as a headscarf-wearing woman," Eraslan said.

"Hers was one of the longest legal battles. She set out in 1968 to fight for women's rights, and it was only in 2014 that I was free to practice my profession as a lawyer wearing a headscarf," she noted.

President Erdoğan, whose acquaintance with Şenler goes back to the 1970s while he was a young politician, said Şenler was among the few names who made a name for her activism in Islamic circles. He said Şenler left a "great and meaningful legacy." He mentioned her work at the Idealist Ladies Association and the Seher Vakti magazine she published. "Things that disturbed some circles but made us very happy," Erdoğan said. The president himself was a victim of the mindset that Şenler fought against and was jailed for reciting a poem with Islamic undertones.

"She has been a leading personality of our era with her fight to live her life according to her faith, not according to a lifestyle forced upon her," Erdoğan said in a speech at Şenler's funeral. "She motivated countless young women to study without concessions from their faith and become individuals serving their nation," Erdoğan, whose daughters had to study abroad due to a headscarf ban for students in Turkey, added. "We don't remember the names of those who jailed her, insulted her and tried to stop her, but Şule Yüksel Şenler will be remembered fondly for generations to come," he said. The president also pledged that the government would set up a library and museum dedicated to Şenler.