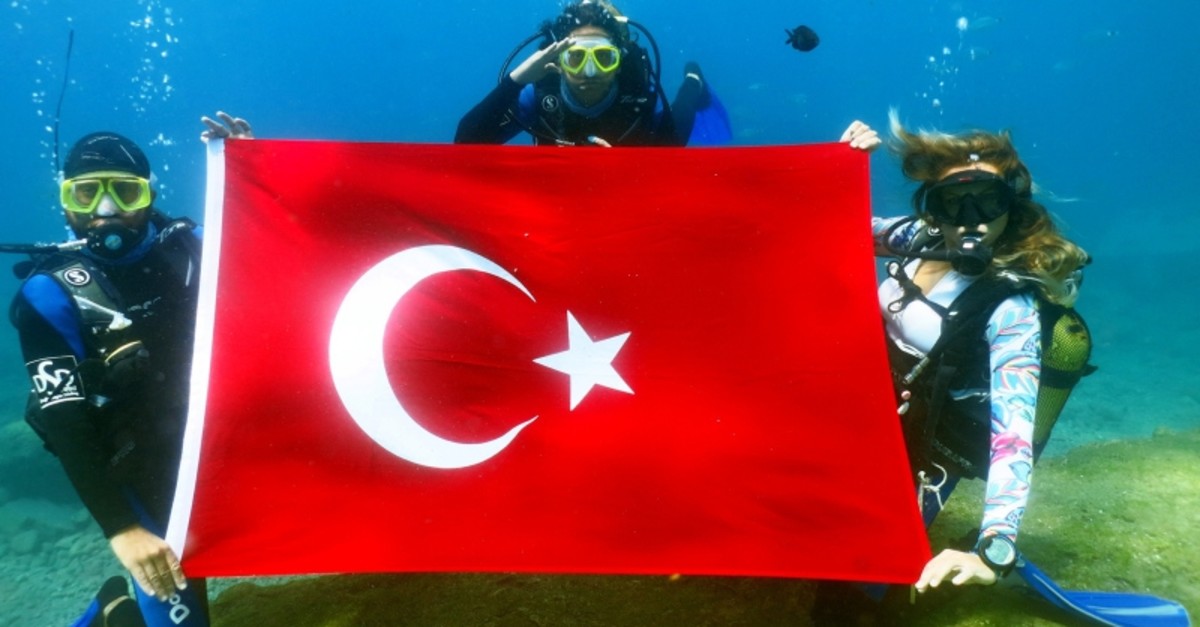 Divers in Fethiye dived into the depths of the Mediterranean Sea to unfurl the Turkish flag to mark August 30 Victory Day. (AA Photo)
by Daily Sabah with AA Aug 30, 2019 5:10 pm

Groups of divers across Turkey unfurled Turkish flags and posters bearing the face of and quotes by modern Turkey's founder Mustafa Kemal Atatürk underwater to mark August 30 Victory Day, the anniversary of a decisive victory against Greek forces 97 years ago that paved the way for national independence.

A group of four divers unfurled a Turkish flag 22 meters under the Mediterranean Sea off the coast of Antalya's Konyaaltı district in southern Turkey to mark the day.

The Mediterranean Autism Sports Club (AKODER) Chairman Demet Çileli Baz said with the move they wanted to commemorate war veterans and fallen soldiers, reminding the world that the Turkish Republic is indivisible as a state and a nation.

Groups of divers unfurl Turkish flags, Atatürk posters underwater to mark Victory Day on the 97th anniversary of a decisive victory against Greek forces that paved the way for national independence https://t.co/EQgPIjdyhw pic.twitter.com/cZFwCqiZTl

During the event, which was organized on the coast of Kerpe by a private diving school with the contributions of provincial gendarmerie units, coast guards, Kocaeli Metropolitan Municipality Fire Department and Kocaeli Water Accidents Prevention Center (KOSKEM), the team dived with a 9-meter-long and 6-meter-wide Turkish flag.

The Mayor of Kandıra district Adnan Turan told Anadolu Agency that they wanted to organize a beautiful and meaningful event to celebrate Victory Day, and came up with this.

Victory Day, as an occasion to celebrate Turkey's glorious past and decisive victory in the 1922 War of Independence, is marked every year across the country on August 30, while the fallen soldiers are remembered with commemorative events.

Turkey's victory over the Greek military on August 30, 1922 in the Battle of Dumlupınar in the Aegean province of Kütahya was the last large engagement between the two armies in the War of Independence, which began with the Greek invasion of İzmir in May 1919 after the end of World War I, with tacit support from the Allied forces, especially Great Britain.

Following the Greek army's defeat in Dumlupınar, the remainder of the disorganized and battered ranks fled back to the western city of Izmir, applying scorched earth tactics and destroying towns and villages along the 300-kilometer route.

The Turkish army liberated Izmir on September 9, which sealed the defeat of the Greek expedition into Anatolia, and hostilities ended with the Armistice of Mudanya on October 11, 1922.