Nation celebrates Victory Day with tributes to the fallen 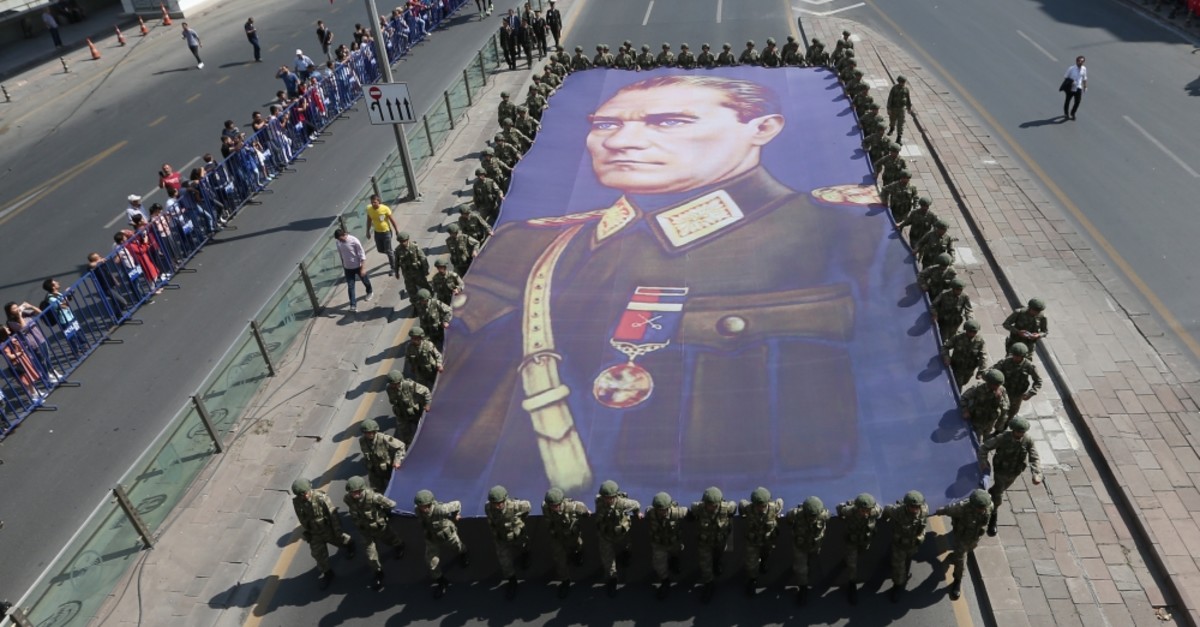 The 97th anniversary of Victory Day, which marks the last chapter in the Turkish struggle for independence, was celebrated nationwide on Friday with ceremonies dedicated to soldiers and civilians who gave their lives to protect the homeland against a post-World War I invasion

Turkey on Friday remembered the fallen and celebrated the patriotic acts of thousands of martyrs who fought in the country's war for independence and other critical battles. Friday was Victory Day and the 97th anniversary of a decisive battle that drove out invading foreign forces in post-World War I Turkey.

In the capital Ankara, the country's leader and other dignitaries attended a string of remembrance events. President Recep Tayyip Erdoğan, top military brass and high-ranking officials started the day with a visit to Anıtkabir, the mausoleum of Mustafa Kemal Atatürk, who founded the Republic of Turkey after the War of Independence, which is commonly known as Büyük Taarruz or the Great War.

In a solemn ceremony, Erdoğan placed a wreath on the grave of Atatürk, who died 16 years after the critical war. Atatürk is credited with rescuing Turkey from the imminent invasion after the Ottoman Empire lost World War I and collapsed, and for rebuilding the country.

The president then penned a message on Anıtkabir's guestbook, a custom for the country's leaders every Victory Day. "Revered Atatürk, today, we are proud to mark the 97th anniversary of the great victory. We remember your excellency, our commanders, officers, soldiers and every member of our nation who contributed to the great victory, a golden chapter in our history. We are determined to protect the republic, which is built upon the sacrifice of our revered martyrs and something you entrusted to us, with our lives. Our fierce struggle in Turkey and outside our borders against threats targeting our national existence is the indication of our resolve. No force will succeed in preventing us from reaching our 2023 goals," Erdoğan wrote, in reference to a set of developmental goals the government plans to accomplish by the centenary of foundation of the Republic of Turkey.

Erdoğan later received guests, including ministers, top bureaucrats, politicians and ambassadors, at the Presidential Complex, who conveyed their congratulations for Victory Day.

A parade was held starting from Parliament to the original Parliament building, where the country's first Parliament convened decades ago. In Istanbul, Taksim Square was the center of Victory Day celebrations, while a parade was held on central Vatan Street. The presidency's Communications Directorate set up an exhibition titled "August 30 Path to Victory" in Taksim Square where documentaries and videos on the Aug. 30 victory were screened, along with an exhibition of weapons used in the War of Independence and personal belongings of Mustafa Kemal Atatürk.

VICTORY A "MILESTONE" FOR TURKISH NATION

Turkish domination in Anatolia began with the Battle of Manzikert in Aug. 26, 1071, which saw Seljuk Turks led by Sultan Alparslan defeat a Byzantine army.

Erol said the Aug. 30 victory in what he described as "the last castle of Turkish Islamic geography" became a model and a motivation for all nations warring against imperialism.

The victory was a message from Turkish people that the Turkish Republic and National Pact, also known as Misak-i Milli, which refers to the set of six decisions taken by the late Ottoman Parliament would be permanent.

"So, the Aug. 30 victory is a significant milestone in carrying out the National Pact targets, which also guarantee the presence of the Turkish republic," Erol said. "When we look at the recent developments, particularly in Iraq, Syria and the Middle East-based developments, we see that the same war has still been going on and the determination of Turkish republic to carry out its historical mission regarding its National Pact is ongoing," Erol said, placing Aug. 30 as the most important turning point in fulfilling the National Pact decisions.

There were three very important things that delivered the victory, according to Erol. "The first one was the strong leadership and resolve [of Mustafa Kemal], who had confidence in his own people," Erol said. "The second one was," Erol said, "using diplomacy and military skills in a coordinated and determined way." He added that Aug. 30 was not just a military victory, but a full-scale campaign fueled by strong leadership and smart mobilization of a nation. "The nationalism, but not in a racist way but mostly with patriotic sentiments, played an important role of course. Patriotism plus religious belief," Erol said.

Erol said the Ottomans were considered the "last bastion" of the Muslim Turkish world and that their defeat would have meant the defeat of oppressed Muslims fighting imperialism. "That was what triggered the patriotic sentiments of Turkish people, which once again has accomplished a vital mission in Anatolia it assumed since the Crusades," Erol said. The war was against the spirit of the Crusades and Western imperialism, and while fighting this war, the Turkish people were aware of their mission on behalf of the entire Muslim Turkish world, Erol said.

Turkey was occupied by Allied forces after the defeat of the Ottoman Empire at the end of World War I (1914-1918).

The foreign occupation prompted Turkey's War of Independence in 1919, in which Turkish forces, led by Gen. Mustafa Kemal, eventually drove the invaders from Anatolia.

From Aug. 26 to Aug. 30, 1922, Turkish forces fought the Battle of Dumlupınar - considered part of the Greco-Turkish War - in Turkey's western Kütahya province, where Greek forces were decisively defeated. By the end of 1922, all foreign forces had left the territories, which would collectively become the new Republic of Turkey one year later.