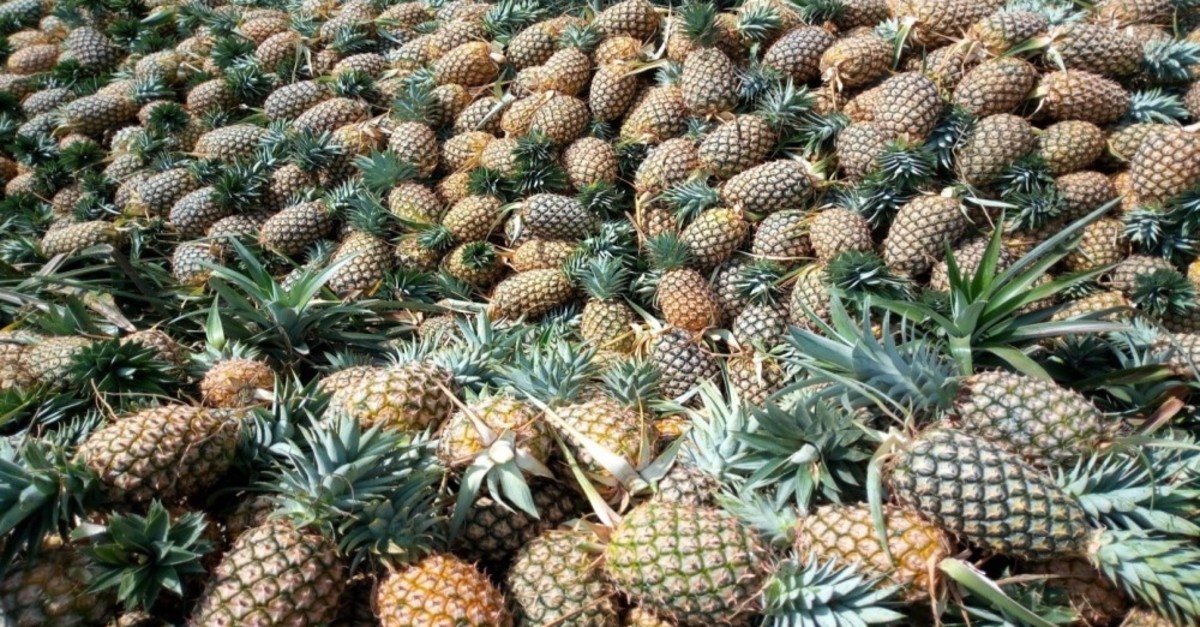 Pineapples are a main source of income for farmers in Guinea and are in high demand from abroad.
by Compiled from Wire Services Sep 07, 2019 12:12 am

The Turkish Cooperation and Coordination Agency is helping Guinean farmers improve agricultural land, which has led to an increase in pineapple production by at least 20%

Turkey's leading aid provider, the Turkish Cooperation and Coordination Agency (TİKA), is lending a hand to Guineans in improving their production of pineapples, a main source of income for farmers in the West African nation.

In rural areas of Kindia, the country's fourth-largest city, the agency has cleared 100 hectares of land for pineapple cultivation.

Kindia is Guinea's food hub and the main supplier of agricultural produce from pineapples to mangoes, palm oil, corn, coffee and cashews. Some fertile and flat lands have little agricultural growth as farmers tend to use traditional methods. Fertile lands covered with bushes are often cleared manually, a very difficult and time-consuming task for the rural community that relies on pineapple farming.

Pineapple production is made in an area of 650 hectares in Guinea and 35 tons of pineapples are grown per hectare. Some 40% of produce is exported to meet the huge demand for the delicious fruit but farmers find it very challenging to keep up, especially with uncleared fertile lands.

Heavy equipment is required to clear the lands and that was where TİKA extended this aid. Bulldozers quickly clear vast stretches of land while the Turkish agency plans to help boost farming even more with initiatives such as gas-powered water pumps for better irrigation and year-round use of lands.

Clearing 100 hectares means a 20% increase in pineapple cultivation and Turkey seeks to contribute to President Alpha Conde's ambitious plan to expand arable areas to 1,000 hectares by the end of 2020. The agency's work to contribute to the agricultural activities has drawn praise from Guineans.

"Pineapple is a flagship in the fruit sector in Guinea as we live in a country with a very good climate for pineapple growth. We have a huge demand from around the world but we cannot produce enough to meet it. TİKA completed a task that would take years for one person in a month and delivered the lands ready for cultivation to producers. They supplied irrigation equipment," he said.

Moussa said their aim was both to increase the arable land and produce.

"Through irrigation in the warm season, fertilization and employing different techniques for sanitation of the fruits, we aim to increase the amount of pineapples produced per hectare to 50 tons from 35 tons. We also target increasing exports to 12,500 tons from 2,500 tons via air cargo," he said.

Moussa highlighted that the 100 hectares of land cleared by TİKA would allow farmers to produce 5,000 tons of pineapples, an amount that would bring 1.5 million euros ($1.66 million).

"It will also contribute to direct and indirect employment of 28,000 people," he added.

Arafan Sylla, a member of the executive board of the Pineapple Federation, was at one of the patches of land that TİKA helped clear.

"It only took two weeks for this land to be this clear. If the equipment stays here for three more months; all lands here will be arable. We ask Turkey to help all the farmers here," he said.

"Everyone is a pineapple grower in our village and we hope TİKA will continue helping us so our youth will not have to leave the village to find jobs elsewhere. A large number of our youth die in the Mediterranean looking for jobs elsewhere," he said.

Guinean migrants often head to Europe in pursuit of a better life but often end up dead in dangerous crossings in the Mediterranean where their boats sink.

Camara added that six districts, including Dandakhoure Center, Mangadakha, Hamdanlaye, Billide and Feta, are vital in pineapple growing. He said that they were looking forward to having Turkey help them make the lands there arable.

Gökhan Keser, the Guinea coordinator for TİKA, said that Guinea was once "central" in pineapple production and in other agricultural produces but negligence of the agricultural sector caused the country to lose this image. He said that they aim to revive it as an agricultural hub and directly contribute to the Guinean economy.