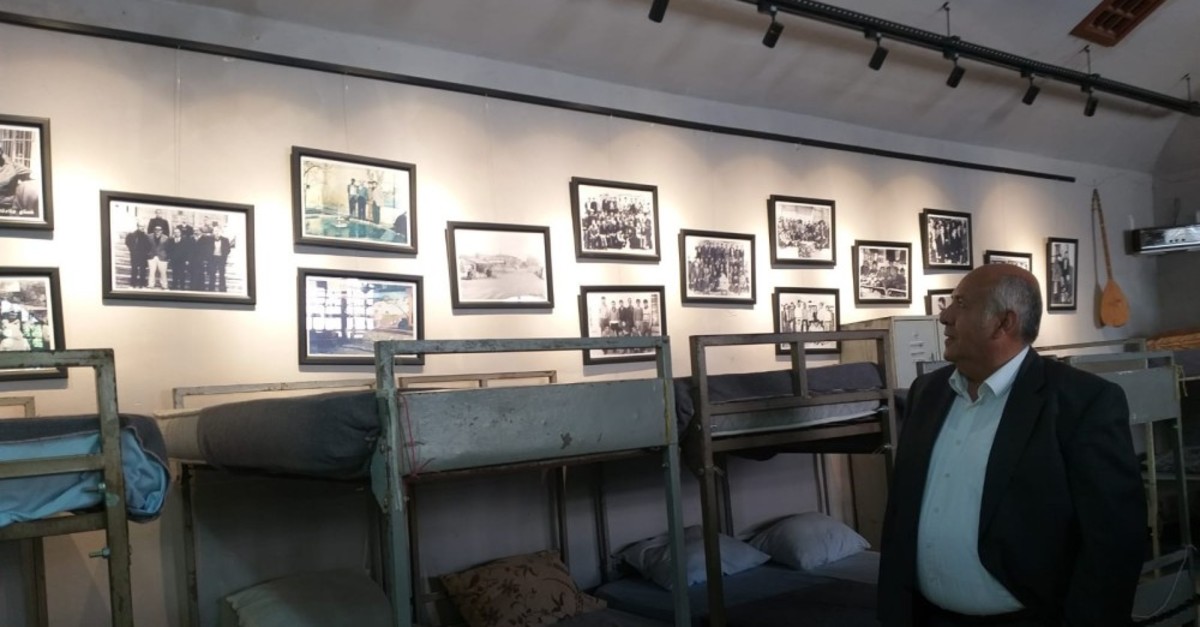 Turkey marks the anniversary of the 1980 coup that took the lives of whomever the putschists deemed guilty, as memories of torture and incarceration still haunt surviving victims

As they walk among the wax figures of convicts and later sit around a wooden table inside a wing lined with bunk beds, a rush of memories emerge in the minds of Naim Yanık and Ömer Girgeç. Yet, they don't elaborate on what they suffered in Ulucanlar Prison though a brief interview is sufficient enough to sum up the ordeal of thousands of people 39 years ago. Yanık and Girgeç are among many victims of the Sept. 12, 1980 coup, and the two men once again walked into the prison in Ankara yesterday to remember their years in the building, which is now a museum.

The Turkish Army stepped in on that fateful day to "execute its duty to protect the nation," an excuse similar to putschists before them, and suspended the government. As coup leader and army chief Kenan Evren said in his declaration, they were seeking to put an end to "economic, social and political problems, anarchy, terror and separatism." What followed was a massive crackdown on thousands of people affiliated with left-wing or right-wing groups and sham trials where one could be imprisoned for years based on sketchy testimonies and evidence.

Yanık and Girgeç were "ülkücü" or idealist, a right-wing group that was at odds with left-wing factions of the time. Both men were arrested before the coup, but things worsened in prison once the army seized power. Yanık was among six who were arrested over "Balgat incidents," shootings that led to the deaths of left wing and right-wing activists in the eponymous Ankara district in 1978. The perpetrators were not caught but police were quick to round up idealist youth living in neighborhoods near the scene. Mustafa Pehlivanoğlu, one of six detainees, would later be the first idealist sentenced to death by the junta at the age of 22. He was hanged on Oct. 7, 1980. Yanık was released in 1991, long after the junta handed over power to a civilian government.

"The coup was like a bulldozer for the idealist movement. It crushed us. I have three friends who were hanged after an unfair trial though they were innocent. [The state] apologized to us years later, but it was too late. People as young as 17 were hanged," he told İhlas News Agency (IHA).

He is tight-lipped on his suffering in Ulucanlar, but Yanık recounts how some 150 people were forced to stay in one small prison wing, and two prisoners were forced to share one small bed. Still, he believes that the real victims were the parents of the prisoners. "Our parents waited for hours in the summer and winter to see us. They are the victims. I don't regret the days I spent in prison," he said.

Ömer Girgeç was sentenced to 400 years in 13 different cases and said he was glad not to be sentenced to death. Like Yanık, he was imprisoned before the coup and like him he complains most about the treatment his parents suffered. He spent more than a decade in different prisons. "We only had a short visiting time, and no one was allowed to talk to their relatives in private. They used to put us in a small room where 50 people huddled together and had little chance to chat with their families. This was another form of torture. "I am here today 39 years later, but the prison years took little from me other than physical frailty," he said. Girgeç recounts his time in Mamak, a notorious prison, as "the worst." "Prison guards would randomly attack us, would beat us. It was like a horror movie. After the coup, it was soldiers who attacked us. In Mamak, people were subject to unspeakable cruelties. You won't believe me if I told you what I went through there but retelling my past only make my wounds worse. I buried my past," he said. It was only after 1986 that the prison became "a normal prison" for them, when the civilian administration took over. "But from 1979 to 1986, prisons were a nightmare for everyone." He recalled a friend, Mustafa Karaca, "who was happy to be sentenced to death." "He was hoping his father wouldn't come to the trial where he would be sentenced to death. He was happy when he returned to prison from the courthouse. 'I am sentenced to death but my father wasn't there. I am happy he did not come' he told me. He learned only one month later that his father was killed in a bus crash, while going to the courthouse to see him."

Yüksel Avşar was a young left-wing activist when she was arrested and imprisoned in Mamak military prison in Ankara soon after the coup. She remained in police detention for 45 days before she was sent to prison. She spent one year in a cell where she was tortured and then released due to the lack of evidence against her. She still does not know on what charges she was arrested and imprisoned. Avşar said female prisoners suffered the worst torture in prison. "All of them were innocent because, like me, all were released after they were tortured in prison. But nothing was the same for us after we were released. They took away our hopes for a better future cruelly. They were forced to resume their lives but their lives were interrupted. I lost my job and could not continue my doctorate study," she told Anadolu Agency (AA). Avşar also avoided describing the "unspeakable acts" of torture but said some female prisoners "lost a chance to become mother."

"They stole our motherhood," she lamented.

Avşar says she will never forgive those behind the torture and incarceration. "I was mentally broken down when I left the prison. They continued emotional torture, while I was free as well. Police would monitor me everywhere I went. I remember always turning back while walking on the street to see if a policeman was following me. I remember being scared whenever the doorbell rang. I was afraid they would arrest me again," she said.

The coup was the third to take place in the short history of the Republic of Turkey, but it wasn't the last as one more coup in 1997 forced the government to collapse. In 2016, the Gülenist Terror Group (FETÖ) tried to topple the government again with its military infiltrators but this attempt was thwarted.

After a decade marked with ideological terror stemming from the Cold War, the lack of accord between political parties and the economic downturn, the Turkish Armed Forces carried out the coup attempt within the chain of command on Sept. 12, 1980.

The era that began with the coup is known for gross human rights violations, suspension of the political process and tens of thousands being detained and tortured. Several prisons became infamous for the systematic torture of inmates. It was also the first time since the 1960 coup, when the prime minister and two ministers were hanged, that death sentences were carried out. Some 650,000 people were detained following the coup and 517 were sentenced to death. Fifty people were hanged. The first executions were in October. Necdet Adalı, a left-wing sympathizer, was hanged first, followed by Mustafa Pehlivanoğlu. The most tragic execution was of Erdal Eren, a 17-year-old teenager who was convicted of killing a soldier before the coup. The Supreme Court twice annulled the death sentence for Eren who was legally ineligible but the military junta ignored the verdict and issued a document claiming Eren was older than 17. Based on this decision, Eren was hanged in Ulucanlar on Dec. 13, 1980. The coup also turned the lives of survivors upside down. Some 14,000 people lost their Turkish citizenship, while 100,000 people had to endure long trials. Another 30,000 people were fired from their jobs after being blacklisted by the junta.

Finally, in 2012 Kenan Evren and Tahsin Şahinkaya were brought before a court for a coup trial. Both men were sentenced to life in 2014 on coup charges. However, they did not spend a day in prison as they died in 2015 while awaiting an appeals process.