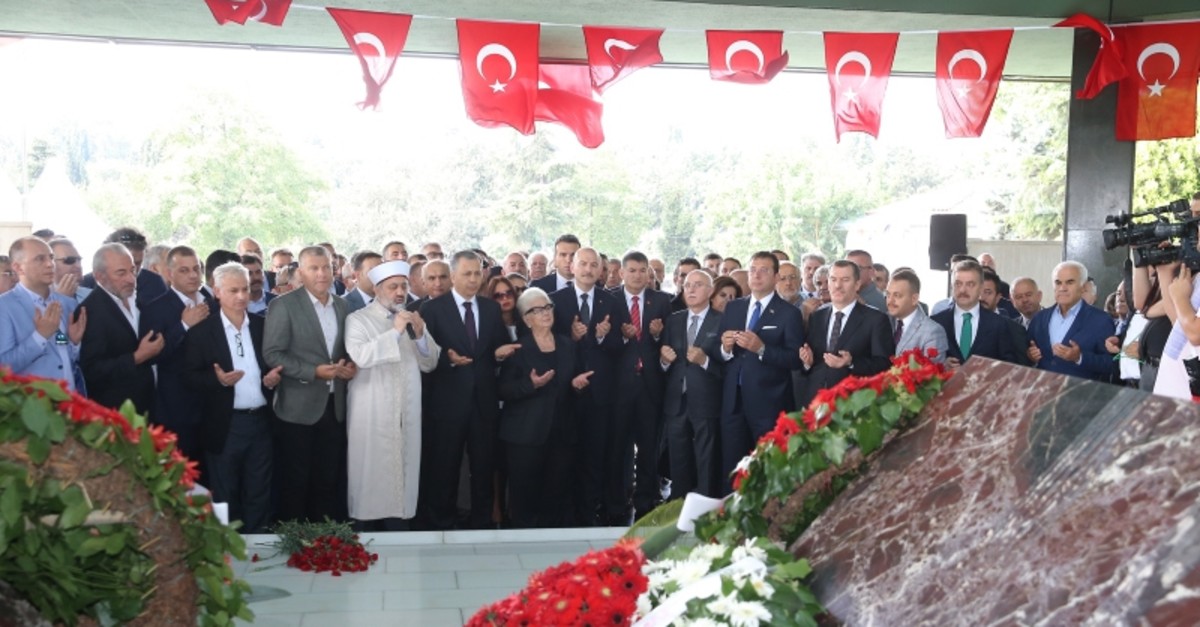 Turkey, a nation that managed to stave off a coup for the first time in 2016, remembered Adnan Menderes, its first prime minister who was hanged by a military junta 58 years ago

It has been 58 years since Adnan Menderes walked to the gallows on a prison island with little emotion. "May Allah protect our nation," were reportedly his last words. Turkey's first democratically elected prime minister was also the first high-profile victim of the country's first military coup.

The beloved politician was remembered at his grave in Istanbul's Topkapı district on Monday, at a ceremony attended by dignitaries including Interior Minister Süleyman Soylu. Menderes was buried at the cemetery next to Fatin Rüştü Zorlu and Hasan Polatkan, his two ministers who were hanged by the military junta a day before him in 1961, one year after the military junta seized power.

"The 1960 coup and executions that followed is one of the most covered-up incidents in Turkish political history. No one apologized for it and the perpetrators got away without punishment. It is a chilling tragedy and an inhumane act," Soylu said at Menderes' graveside.

He also lamented that Turkey did not learn lessons from the first coup in the history of the Republic and on the contrary, celebrated it for a while as a freedom day. "Thus, we saw more coups and coup attempts in the following years," he said.

Indeed, the coup apparently encouraged the Turkish military to follow the example of junta leaders in the following years. Ten years after Menderes' execution, generals issued a memorandum that forced Prime Minister Süleyman Demirel to resign. In 1980, social turmoil plagued the country and pitted left-wing groups against right-wing groups and vice versa, and gave the military another opportunity to "take over." Another coup followed in 1997 but it was only in 2016 that Turkey was united to strongly oppose an unfolding coup and managed to thwart it when military infiltrators of the Gülenist Terror Group (FETÖ) tried to seize power.

"These people did not commit any crimes. Their execution was illegal. It was the work of a gang, the result of a sham trial," Süleyman Soylu said about the hanging of Menderes and his colleagues. "Turkish democracy was a murder victim 58 years ago," he added.

Born in 1899 in Turkey's western province of Aydın, a young Menderes was educated at the American College in the Aegean city of Izmir. During the Turkish War of Independence, from 1919 to 1923, he fought against invading Greeks and was awarded a medal of honor for his valor.

After graduating from Ankara University Law School in 1930, he joined the Liberal Republican Party. At the personal invitation of Mustafa Kemal Atatürk, the founder of the Turkish Republic, in 1931 he joined the ruling Republican People's Party (CHP) and was elected to Parliament from Aydın.

In 1945, he was discharged from the party, along with deputies Celal Bayar, Refik Koraltan and Fuat Köprülü, due to their opposition to anti-democratic provisions in laws and party bylaws, in an incident known as the "Memorandum of the Four." A year later, Menderes and former Prime Minister Celal Bayar founded the Democrat Party (DP), Turkey's fourth legal opposition party to survive for more than a year.

On May 14, 1950, the DP came in first in that year's general elections, its first ballot box victory, taking 53% of the vote and claiming 408 out of 487 seats in Parliament. Up until the coup in 1960, the DP enjoyed a string of successes, winning three consecutive general elections against the CHP. As the most senior member of the group and a former close confidant of Atatürk, who had passed away in 1938, Bayar was elected by Parliament to the post of president after incumbent Ismet Inönü stepped down, with Menderes becoming prime minister and the party's official leader.

The Menderes government was behind many changes in post-World War II Turkey but Menderes is perhaps best remembered for restoring the Muslim call to prayer to its original state.

As prime minister, Menderes restored the Muslim call to prayer to its original Arabic, as heard throughout the Muslim world. The call had been altered to Turkish in 1932 by the Religious Affairs Directorate in the early years of the republic. The DP also passed a law allowing religious education, which had been abolished in the name of secularism in education, at the request of children's parents starting in the fourth grade.

At a cabinet meeting on July 25, 1950, the Menderes government also took the historic step of deciding to send a military force to support the U.N.-backed South Korean coalition. The success of the Turkish troops fighting in the Korean War was influential in Turkey's NATO membership in 1952, a membership it holds until this day.

A longtime critic of state intervention in Turkey's economic life, since coming to power Menderes followed a liberal policy in the nation's economy. Economic development spurred by his policies accelerated Turkey's transition to a free-market economy. Lifting restrictions on imports, the Menderes government also lowered interest rates and encouraged the private sector to use more loans. Suggestions that the loans be used especially in the field of agriculture helped accelerate modern-day, industrialized agriculture.

With the contribution of the U.S. post-World War II Marshall Plan, new industrial facilities were established in the country. The Turkey Foundations Bank was founded in 1954. During this period, the country's gross national product grew at an average of 9% a year.

In the 1957 elections, the last one before the coup, the DP won 424 out of 610 total seats with 47.8 percent of the votes while the CHP only won 178 seats with 41.4 percent as a result of the election system introduced by the CHP itself before 1950 giving the leading party a hugely disproportionate and crushing majority in Parliament, thus rendering the opposition ineffective. The deteriorating economy, the political gridlock and the DP's increasingly authoritarian policies led to increasing dissent especially among the urban population and circles of the bureaucracy and the military.

Menderes was jailed in 1960 and made to stand trial by the military regime that had overthrown his government. He was arrested along with Zorlu, Polatkan and almost all leading DP lawmakers and figures following the military coup on May 27, 1960.

They were accused of violating the Constitution as well as embezzling state funds and were put on trial by a military court on the island of Yassıada, now seen as a symbol of the nadir of Turkish democracy, located in the Sea of Marmara, southeast of Istanbul.

Following a year-long trial by a military court on Yassıada, dubbed as one of the worst legal processes in Turkish judicial history, Menderes along with Zorlu and Polatkan were executed on another Marmara island, Imralı.