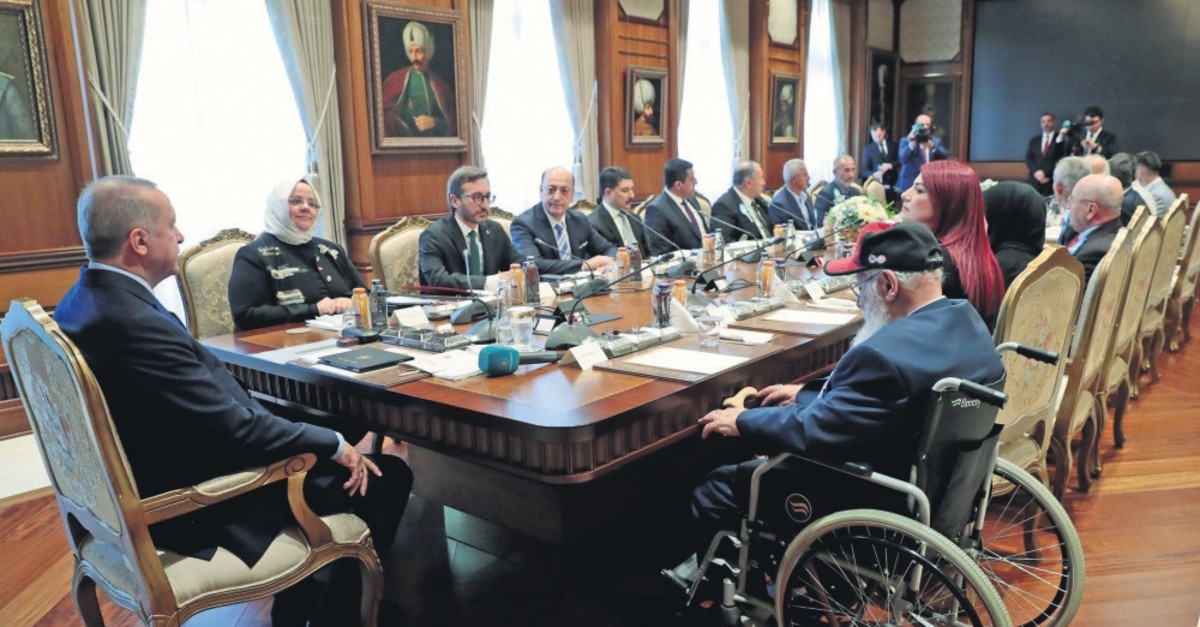 From soldiers who fought in Korea decades ago to those who stood against the 2016 coup attempt, heroes were honored yesterday on Veterans' Day

Turkey marked Veterans' Day yesterday, an occasion to pay tribute to war heroes and those injured in terror attacks. President Recep Tayyip Erdoğan received a group of veterans at the Presidential Complex, while ceremonies were held across the country to honor veterans.

Veterans' Day was first marked on Sept. 19, 1921, the day Mustafa Kemal Atatürk, then commander-in-chief of the country was given the title "Gazi" or "Veteran," by Parliament, following his victory in the Turkish War of Independence. Turkey also marks March 18, another day where Atatürk, founder of the Republic of Turkey, also served as a commander of Ottoman troops fighting the Allies, as Martyrs' Day. Turkey avoided World War II and largely avoided participating in international conflicts. Today, the oldest veterans are those who fought in the Korean War in 1950. The country has also dispatched troops to Cyprus to help Turkish Cypriots against the Greek Cypriot aggression in the 1970s. The highest number of veterans, however, comes from Turkey's decades-old fight against terrorism. Hundreds of soldiers and civilians were injured and maimed in a campaign of terror by the PKK in southeastern Turkey and in clashes with the terrorist group. Another large group of veterans are those who confronted the putschist soldiers of the Gülenist Terror Group (FETÖ) on July 15, 2016. Nearly 2,200 people were injured when FETÖ's military infiltrators sought to seize power that day. A strong public resistance thwarted the attempt.

Veterans are a highly regarded community in the country where patriotism remains strong. On this occasion, the Ministry of Family, Labor and Social Services announced that 425 people, including veterans and relatives of martyrs, were given public sector jobs. The ministry already provided employment for 8,508 veterans and their relatives.

Speaking to Anadolu Agency (AA), Minister of Labour, Social Services and Family Zehra Zümrüt Selçuk said the government always cared for veterans and families of martyrs and would continue their policies to help them. "There used to be two periods for mass employment for veterans, but now we provide them employment throughout the year. In the past, veterans or relatives of martyrs were given jobs without looking into their background. Now, they can have jobs based on their level of education. Teachers, nurses, engineers among them are being assigned to jobs corresponding to their education level," she said.

The day is also a holiday for veterans and their spouses who work in the public sector. The ministry also hosts a department exclusively serving the families of martyrs and veterans. Ministry crews regularly visit veterans to hear their requests or complaints about any services. They are also given psycho-social support. Among other services offered to veterans are coverage of education expenses for their children, a monthly salary, a once-a-year additional payment, employment rights, interest-free housing loans, free travel on mass transit, discounts in bills, exemptions from multiple taxes, priority in job assignments and free admission to rehabilitation centers and nursing homes.