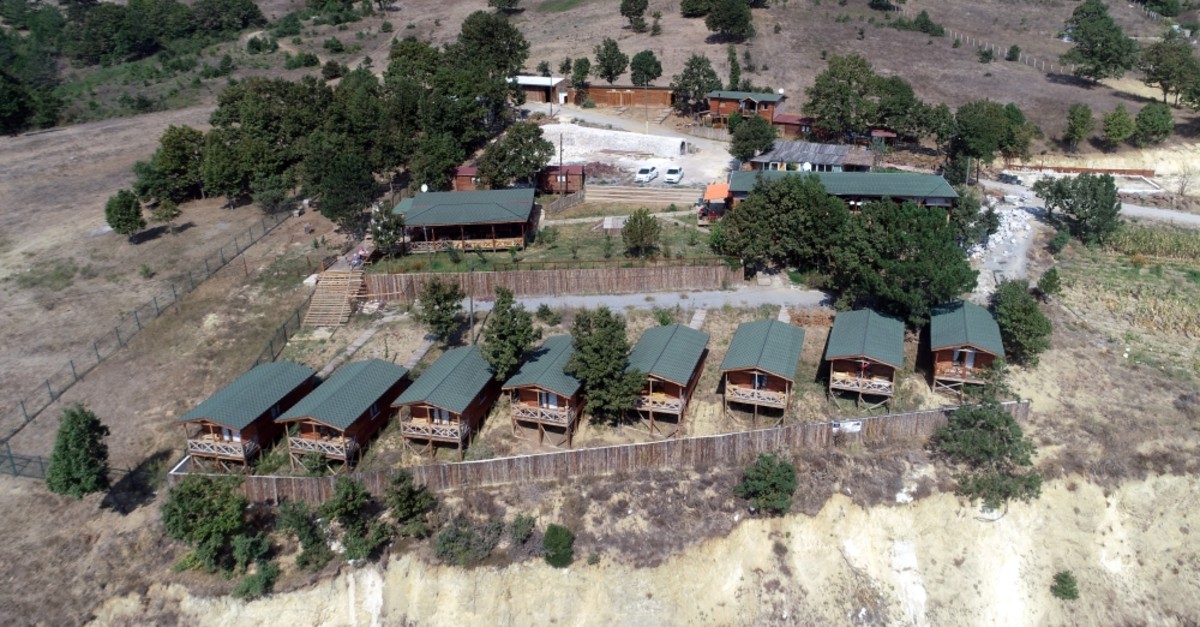 Near a village and surrounded by forests, Humanity Village in Orhaneli offers a chance for drug addicts to recover from their addictions.

Set up by an association with the support of the provincial governorate of Bursa, the village consists of bungalows where addicts stay for a medication-free program. In the camp opened last year, tenants engage in agricultural work, from tending the fields to taking care of livestock. A workshop in the camp also teaches them handicrafts.

"There isn't much we do here. We only tell them that we can give them a space if they want to do something about their life," the association's president, Hatice Arıkan, said. "We gladly take the hand they extend and support them," she added, pointing out that it is the addicts that shape how the camp works.

The 5-acre camp near Nalınlar village primarily serves as a place for addicts to occupy themselves. Some feed the pigeons and chickens; others ride horses and care for stray animals. Others grow vegetables in the fields. The camp can house 40 people and currently 33 are on site. The association, with the help of experts, has helped more than 100 addicts beat their addictions and return to their former lives in one year.

Arıkan says those seeking rehabilitation determine the time they spend here on their own and, the staff does not limit or extend their stay. She says along with agricultural work and caring for animals, their guests also help elder residents of Nalınlar village with their farm work. "This is a relatively new project, and there will be more additions in the future. We want to create an atmosphere where volunteering academics can meet [the addicts], and they can exchange ideas on how to shape their lives," she told Anadolu Agency (AA).

She highlighted that most guests left on a positive note and embarked on a new life without their addictions. "This is a place where they can set the level of quality of their lives themselves. They learn how to be a good person here and how to do good things for other people. They discover their own values," Arıkan says.

Twenty-five-year-old A.D. agrees. The young man decided to quit drugs after one year and moved to the camp to kick his habit. "I have been here since last month, in the middle of nature. I tend the orchards here and help the elderly, sick people in the village. It is very good to keep you occupied. I discovered great changes in me in one month. This is like treatment. I also learn how to fend off the urge [to take drugs]," A.D. says. One thing he also learned at the camp is a saying he liked very much: "It is only you who can keep you alive. If you destroy yourself, no one can help you exist."

"This is where I learned to value myself," he added.

Twenty-four-year-old B.S. has been taking drugs for 10 years and has been in the camp for two months. "A friend told me about this place. The Humanity Village taught me to preserve my will, to be able to say 'no' [to drugs]. It was difficult, but I feel like I accomplished it," he says.

Turkey, which is more known as a transit country for drug smuggling between Europe and Asia, looks to curb the drug abuse problem prevalent among the youth. Synthetic drugs in particular pose a threat to youngsters. There are no concrete figures regarding the rate of drug use in the general population, but a police report from 2018 shows 941 people died of drug use in 2017.

The prevalence of a wide variety of drugs in recent years and increased revenues for terrorist groups from the drug trade have forced Turkey to escalate the crackdown on drug smuggling and use. The government launched "The Rapid Action Plan against Drugs" in 2014 to counter drug abuse and smuggling. The action plan covers all aspects of the struggle against narcotics, from raising awareness of their dangers and curbing demand to rehabilitation and treatment of addicts and facilitating social inclusion.