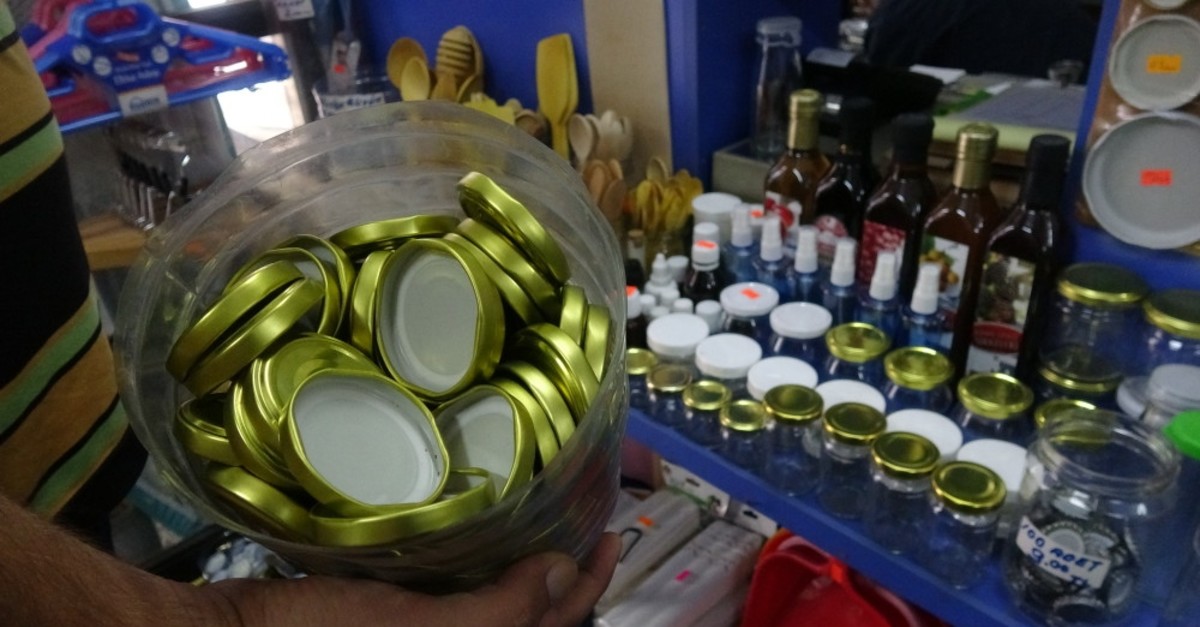 Jar caps have been a valuable asset due to limited supplies.
by Daily Sabah with Agencies Sep 25, 2019 12:58 am

An unusual shortage has hit fans of jarred food. Those looking to store food in glass jars for winter currently face an absence of a key item: jar caps. The unique problem is related to cap manufacturers' miscalculations of increasing demand in the country, where storing food from tomato paste to jams prepared at home in jars is a long-held tradition.

Existing supplies are being sold for double the price due to the huge demand, while businesses in İSTOÇ, Istanbul's largest marketplace for wholesalers, reported running out of caps on Monday.

Erdal Karakaş, who sells jar caps in his glassware shop, told Demirören News Agency (DHA) that there is a supply, but it is not enough.

"We used to sell up to 25,000 caps a year, but it increased fivefold this year. I already sold all my supplies at prices between [TL 0.35-0.45] but cap prices are very high elsewhere now. Their price has risen to almost as much as the price of what is inside the jar," Karakaş said.

A customer who was looking to buy caps at Karakaş's shop says everybody wants to make tomato paste and store it due to the low price of tomatoes.

Hasan Arpaçı, a cap wholesaler in İSTOÇ says they ran out of supplies quickly. "There are four stores selling caps here, and ours was the best-selling. We brought in truckloads of caps, but all have been sold. It only took 30 minutes to sell a truckload of caps," he said. Arpaçı also links the increasing demand to cheaper vegetable prices.

"Producers have been caught unprepared," he noted, adding that a box used to be sold for between TL 105 and TL 110, but now the price has skyrocketed to TL 250. "We saw an 80% rise in orders, and people are still placing orders from all around Turkey," he said.

Caps are key for good storage of food and although consumers have old caps, they need to replace them with new for better preservation.

Murat Taşdemir, another cap seller, is happy with the booming sales. "Customers are more likely to store food this year because of low prices. A kilogram of tomatoes was TL 8 last year, and it dropped as low as TL 0.70 this year," he said. Giving an example of huge demand, he said he was about to enter Istanbul from Düzce where he loaded his truck with caps from a factory there when someone stopped him. "He saw the load I was carrying and purchased two boxes there. I brought the remaining boxes to my store, and they were all gone in three minutes," he said.

The short supplies also drove up the prices online. Some online retailers ask for a price of TL 4 for one cap, while prices are still as low as TL 0.40 in businesses in small cities.