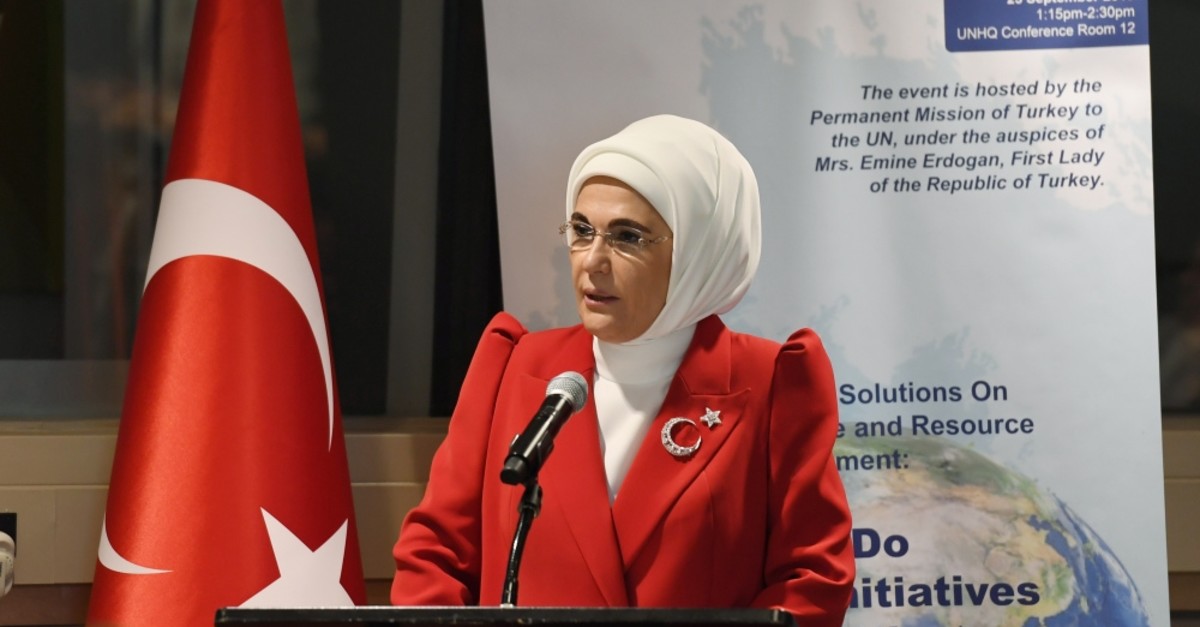 As the Zero Waste Project gains momentum in Turkey, its champion first lady Emine Erdoğan took the recycling drive to the United Nations where she called on the world to take action instead of simply preparing reports on the issue

Turkey seeks more recognition for its Zero Waste Project championed by first lady Emine Erdoğan. Erdoğan was at the United Nations on Wednesday for a panel on the issue and called on the international community to take action instead of simply talking and preparing reports. The first lady launched the nationwide project two years ago in the hope of minimizing unnecessary waste and increasing recycling, ranging from waste like paper to food. The project draws interest everywhere in Turkey as more companies and people join the effort. Erdoğan attended an event on the sidelines of the 74th session of the United Nations General Assembly and explained the project while calling for attention to the global issue.

She said the world is going through a "plastic era" and that a sustainable life is possible with the protection of soil, water, the climate and biodiversity. Erdoğan noted that the problem affects not only the present but also future generations.

"Plastic has already become part of the water that we drink, the air that we breathe," she said, referring to recent studies conducted in Colorado and France. Saying that this plastic waste is split into microparticles during its journey in water due to salty ocean water and heavy waves, Erdoğan noted that even on beaches where there is no human settlement, there is plastic waste. "It has been found that microplastic can travel 100 kilometers in the air with the wind. This is far beyond urban pollution. Plastics thrown from one end of the world can travel to completely different places. The environmental crisis is a very strong cause for alarm," she warned.

"What we call the environmental crisis is ultimately the price of our way of life, our modes of production, that is, the essence of this world order based on consumption," she said. "In 2017, to reverse the effects of these costs, we launched the Zero Waste Project in Turkey." The first lady praised the efforts of the Turkish Environment and Urban Planning Ministry, saying the Zero Waste Project has spread rapidly throughout the country. "Especially in schools, activities that will enable children to gain environmental awareness have been held successfully," Erdoğan added.

She also said the Zero Waste Blue Project was launched in Turkey three months ago for waste-free seas. "We, as a country, are open to all the children of the world, for all kinds of cooperation in building a livable future," she said. "I think that all the borders between the countries should be lifted to overcome the environmental crisis," said Erdoğan, calling on the international community. She added that Turkey is open to all kinds of cooperation to build a livable future for the children of the world. "I find it urgent to prepare a new international convention on marine litter and microplastics. It is time to think about it, not talk or prepare reports, but take action," she concluded.

The project, which started in 2017 and was embraced nationwide over the next two years, was first applied at the Beştepe Presidential Complex and the ministries before being adopted by municipalities around the country as well as private companies and public buildings, from hospitals to schools. Currently, over 18,750 public institutions are included in the project, separating waste at its source.

Turkey looks to phase out landfills, whose numbers have considerably decreased in recent years, and switch to a recycling model where no waste would "go wasted." The country has started to prioritize waste management over concerns of rising environmental damage, with municipalities responsible for garbage collection upgrading their waste management systems.

With awareness higher now on the issue, zero waste has seen more applications. In the northern city of Samsun, the municipality runs a first-of-its-kind project for animals. Every day, food waste from public agencies is brought to a facility in the local animal shelter where they are processed to be food for cats and dogs. Meals and other waste are turned into animal food to be served to 1,000 animals. The conversion facility has a capacity of producing 30 kilograms of cat food daily and 150 kilograms of dog food. Excess food is being stored in cold storage depots in the facility for future use in the animal shelter which, at times, accommodates about 10,000 animals throughout the year. Nurhan İşler, head of the municipality's veterinary services, says they launched the project in 2018 and improved it to integrate it into Zero Waste Project. "Organic food waste is mostly delivered to solid waste storage areas, and we decided to integrate it into animal shelters for a more efficient use of food waste. Companies and public agencies send their waste here, and we process them in machinery we set up at the shelter to serve them to animals," İşler told İhlas News Agency (IHA). He also notes the project also significantly cut the budget allocated for feeding the stray animals in the shelter.

In the southern city of Mersin, City Hospital, the biggest health facility in the Mediterranean city, has managed to recycle 655 tons of paper waste since it opened in 2017, saving 11,135 trees. The hospital's wards are fitted with zero waste bins, where the waste is dumped separately, while the hospital staff underwent training on zero waste awareness. Along with paper waste, the hospital managed to save 13 tons of vegetable oil used in meals served to staff and patients; this equals saving 14.5 million liters of water from contamination from oil. The hospital also saved 2,500 batteries from going to waste. With compost derived from food waste, the hospital also raise flowers in a "zero waste garden."

In Istanbul, Yıldız Technical University developed a new approach to the project. Collecting unused equipment in the university's different departments, the university set up a new laboratory. The equipment, not operated due to high costs before, is provided for the use of both the academics and industrial corporations. The new laboratory now provides 33,000 analyses for different purposes yearly now, up from 1,880. The laboratory's director, professor Sezgin Bakırdere, told İhlas News Agency that they also set up a glass workshop and were converting glass waste into mechanisms to carry out experiments. "Laboratories pay high figures for importing glass material, but our workshop can produce it for much, much lower costs," Bakırdere said.

The glass workshop also serves as a place to convert discarded glass bottles into pieces of art. "You need at least TL 23 million to set up such a laboratory from scratch, but we decreased costs by simply assembling the unused equipment. Our work here varies now, from analysis for criminal cases to quality control for imported oil, to likely toxic ingredients in food," he added. In Başakşehir, the municipality started collecting food waste to turn into compost. The compost derived from waste is used in parks across the district on the city's European side.

In western Turkey, an importers' union was the latest to join the Zero Waste Project. The Ege Importers' Union, an umbrella body of importers in the Aegean region of Turkey, contributes to the project both with recycling in its offices and in companies which are members of the union.