Care for elderly under spotlight as population ages 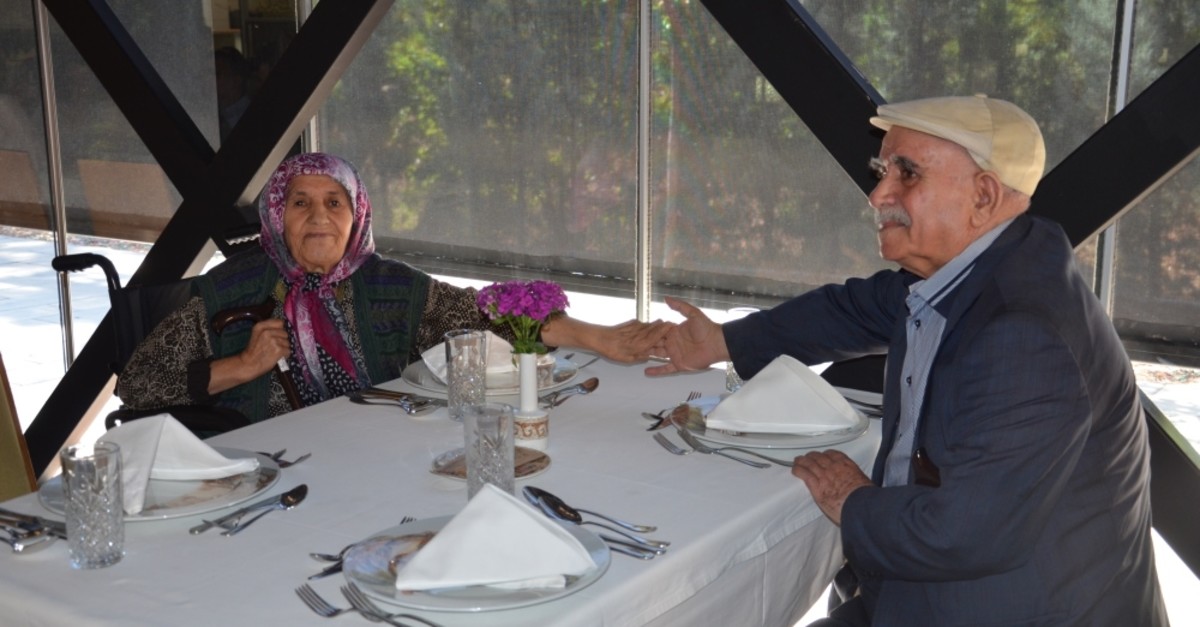 Cesim and Emine Kaynak, an 84-year-old couple, have a romantic lunch courtesy of the local municipality which also offers them home care in the southern city of Gaziantep, Oct.1, 2019.
by Compiled from Wire Services Oct 02, 2019 1:02 am

Turkey is still a young country compared to others but projections show its elderly population will increase in the near future. The proportion of senior citizens increased 16% in the last five years and the country now looks to encourage the active aging concept among its senior population.

Yesterday was the International Day for Older Persons and events were held across the country, from conferences to seminars on how to tackle the aging phenomenon. The government, meanwhile, readied a "vision document" for the next four years to promote active aging and push reforms for better care of its senior citizens. The document or a road map prepared by the Ministry of Family, Labor and Social Services aims to develop policies for new services and support for the elderly, from caring economy to active aging, from improving life quality to the rights of senior citizens.

Figures for 2018 show people above the age of 65 comprise 8.8% of the population and this figure is expected to rise to 10.2% in 2023 and will reach 21% in 2050. This year is the Year of Senior Citizens as declared at an Aging Council in February which met at the Beştepe Presidential Complex. The council released a set of reports and declarations and the government's "vision document" parallels with reports. The document, divided into six categories aims to reach policy goals between 2020 and 2023. The categories include active aging, caring economy, elderly care services and life quality, economy of aging, senior citizens' rights, elderly-friendly cities and local administrations.

Nursing homes play a major part in Turkey's services for senior citizens dependent on care and they cater to all citizens with or without social security. Nursing homes offer free services to senior citizens with economic difficulties and they provide both daycare and health services, along with social, psychiatric and legal assistance to the elderly. Number of elderly care and rehabilitation centers were only 63 in 2002 and today, the number rose to 152 and some 13,883 people benefit from nursing home services. Municipalities and foundations also run 254 nursing homes serving 12,370 people.

Daycare homes for the elderly are now more popular thanks to the government's efforts to promote them to help senior citizens living with their families and relatives. Currently, 237 senior citizens benefit from those homes in 17 cities and the government plans to increase their number so that working next of kin of elderly citizens in need of care would not need to worry about their loved ones. A new model of care offers senior citizens free care at "elderly houses" where up to five senior citizens can stay together, each with a room of his or her own. The project, first launched in 2012, now serves to 129 people in 32 homes across the country.

Turkey also pays monthly wages to people above the age of 65 and in need of care. As of end of 2018, 709,590 senior citizens were paid TL 2.9 million in total. In 2016, the country launched Elderly Support Program (YADES) to endorse municipalities for home care of the elderly at home. YADES so far reached out to more than 35,000 people.

Professor Emine Özmete, who heads the Aging Studies Research and Application Center at Ankara University, says Turkey should accelerate work to switch to "care security system" to cover the care costs for an increasing aging population. Özmete says some 900 million of the world population is at the age of 60 and above and this would reach 2 billion in 2050. She pointed out that issues related to the needs of senior citizens need to be addressed on a micro-level and macro-level, adding that aged countries prioritized "care at home" concept.

"As an aging country, we need to realize institutionalized home care services. Caring for the elderly at family home is etched in our culture and a responsibility for everyone. However, lack of proper caring skills especially for sick elderly citizens creates the need for professional home care," she told Anadolu Agency (AA).