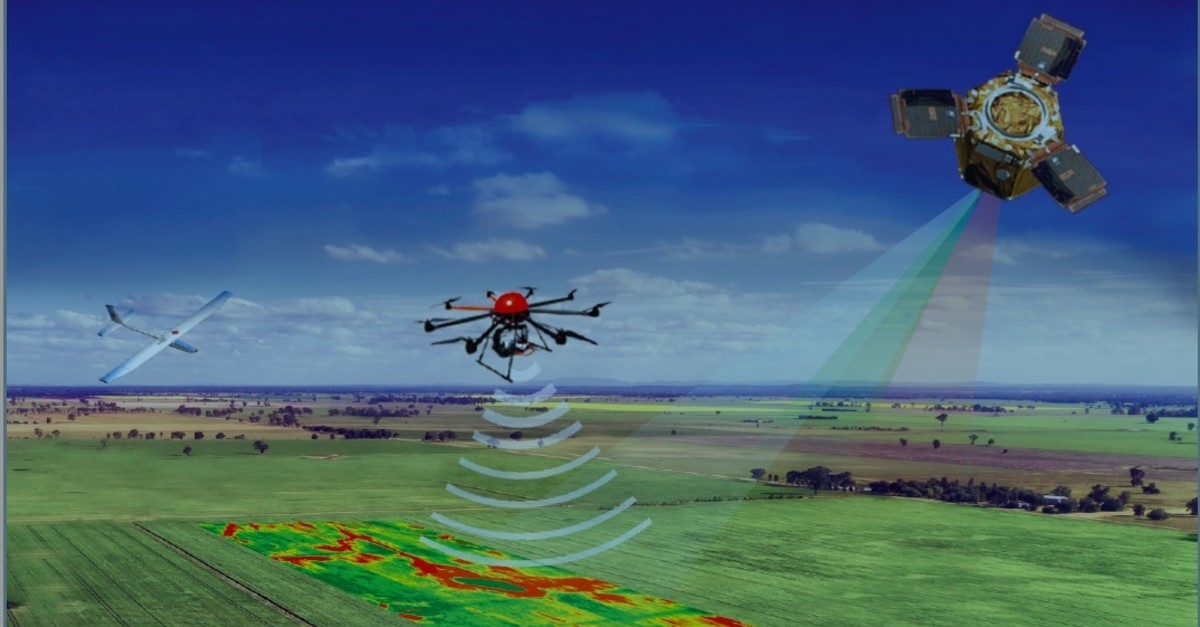 Drones and satellites are being used to capture images of agricultural areas for application of the project.
by Daily Sabah with AA Oct 10, 2019 12:55 am

Scientists have joined forces with local authorities to improve agriculture in the vast deltas of southeastern Turkey, as part of a development project that will see the use of space technology for better cultivation practices

Turkey still has a long way to reach the stars but remains committed to improving local satellite and space technology. The space directorate of a state-run body found grounds for cooperation with a development organization in the country's southeast to ensure agricultural development using space technologies. The "Precision Agriculture and Expansion of Sustainable Practices" project, run by the space department of the Scientific and Technological Research Council of Turkey (TÜBİTAK) and the Southeastern Anatolia Project (GAP) Regional Development Directorate, is helping farmers increase efficiency. With more technological assistance, Turkey plans to save at least 25% in fertilizer use, the highest cost for farmers.

Turkey recently set up a space agency and concentrated efforts on research and development in space technologies. It has also successfully built communication satellites. Now it uses its experience in precision agriculture, which is also called satellite farming or site-specific crop management. Precision agriculture is an agricultural concept based on observing, measuring and responding to inter and intra-field variability in crops. The project primarily aims to make the right amount of agricultural input at the right time to reach the best efficiency levels, particularly in fertilizer use.

In the absence of development, the region's resources were underused or misused and for decades, regional growth was stunted. A campaign of violence by the terrorist group PKK and negligence on the part of authorities are blamed for lack of growth. The regional development project seeks to change the fate of the southeast by extending it a much-needed lifeline.

The Turkish government put the project on the list of its priorities in 2007 and launched a GAP Action Plan covering five years, from 2008 to 2012. The plan aimed to complete basic infrastructure work, particularly in irrigation, at least partially, and launch primary programs and sub-projects for economic and social development to accelerate overall regional development. In the first step of the TÜBİTAK-GAP cooperation, with the assistance of a top state-run defense company and Turkey's Göktürk 2 satellite as well as European Union and NASA satellites, images of the region were recorded. Defense Industry Directorate of the state also took aerial photos of Harran Plain at the heart of GAP with hyperspectral cameras. Simultaneously with aerial data collection, authorities collected data on the ground in different phases of wheat, corn and cotton cultivation.

The project also brought forth the development of the first locally-made precision farming software. The software uses a 99% precision in detecting produce texture in satellite images and helped detection of anomalies, classification of crops, their health and development.

As part of the project, an interface was created for farmers to be delivered an analysis of crops and fields by agriculture counselors tasked with helping farmers. The software also helped the integration of soil studies and fertility maps. The next phase was fertilization practices and authorities aim to make at least 25% saving in fertilizer use. Now, an automated fertilization system with multiple variables is being used in the region after analysis of images from produce fertility maps and images taken by unmanned aerial vehicles (UAVs).

The project provides analysis and research on a wide variety of issues regarding better agriculture. Employing satellite and UAV images, it provides produce texture maps, variability in fertilizer use, crop forecast, detection of plants harmful to crops, etc. The project will also help research and development for precision farming tools to be used in other regions of the country and help food security with a more limited use of fertilizers.