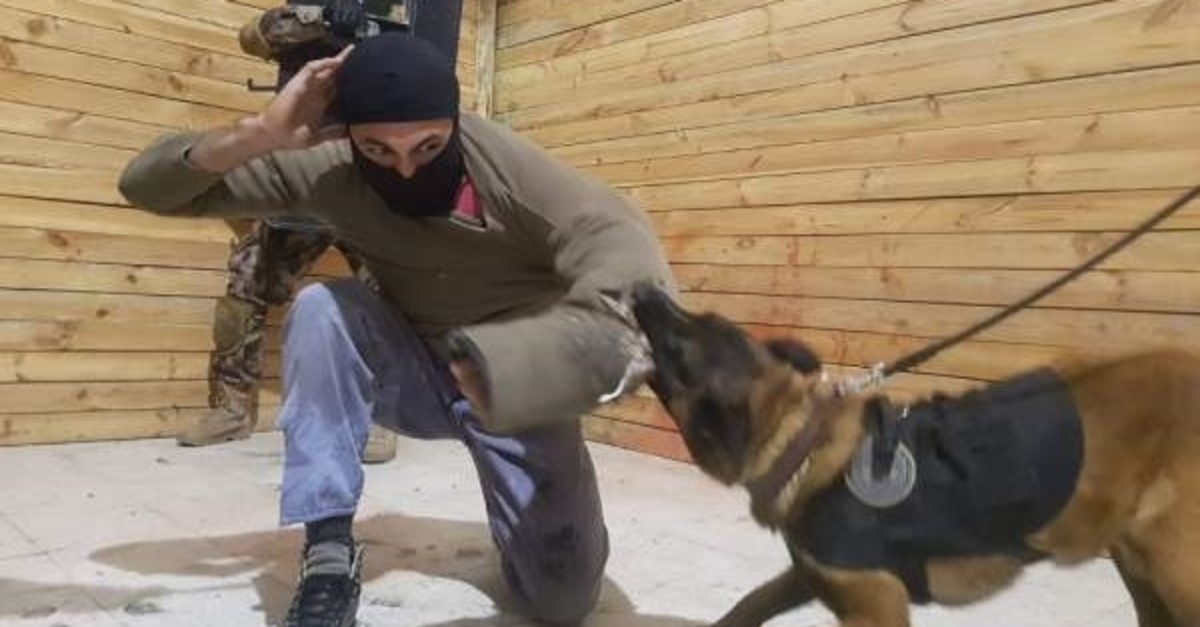 A police dog tackles a ,suspect, during a training session. (DHA Photo)
by Daily Sabah with DHA Oct 15, 2019 12:00 am
Inside the dog training center of the Turkish National Police’s Counter-Narcotics Department headquarters in the capital Ankara, the four-legged helpers of Turkish police undergo strict training.
Sharpening their investigative instincts under the watchful eye of their human trainers, different breeds of dogs learn police work firsthand in obstacle courses and classes where they are trained to do everything from sniffing out drugs and explosives to tracing tracks of scents left by criminals.
Under different scenarios, these dogs are prepared for the most difficult and dangerous tasks at the center in Ankara’s Gölbaşı district where elite police units are also trained.
Belgian shepherd dogs, Labradors and Golden retrievers scale obstacle courses and learn how to restrain suspects. In one scenario, dogs assisted police storm a building occupied by terrorists and neutralized a “terrorist” by grabbing him and not letting him go. A police supervisor overseeing the training, who declined to give his name, said they prefer the Belgian shepherd dogs, like the one which escorted counterterrorism police in this scenario, on counterterrorism operations.
The dogs have a weekly training schedule and every day they repeat the same scenarios before they are ready to accompany their human partners. The first task in training is how to raid a structure with hostile elements inside. The next step is neutralizing gunmen and saving hostages. In other sessions, they are trained in how to act in clashes in open areas and tracing the scent left by suspects.
Belgian shepherds were active in a string of counterterrorism operations in 2016 in southeastern Turkey. The supervisor says one dog escorting Special Operations Police in those operations died while saving the life of a human officer. He says some dogs were also injured in hostage rescue operations. “We start training them early in their lives and they can adapt to every circumstance and environment a Special Operations police should adapt to. They are trained to adapt to an environment where heavy weaponry, grenades etc. are used and trained to travel in armored vehicles and helicopters.”
Last Update: Dec 20, 2019 1:04 am
RELATED TOPICS