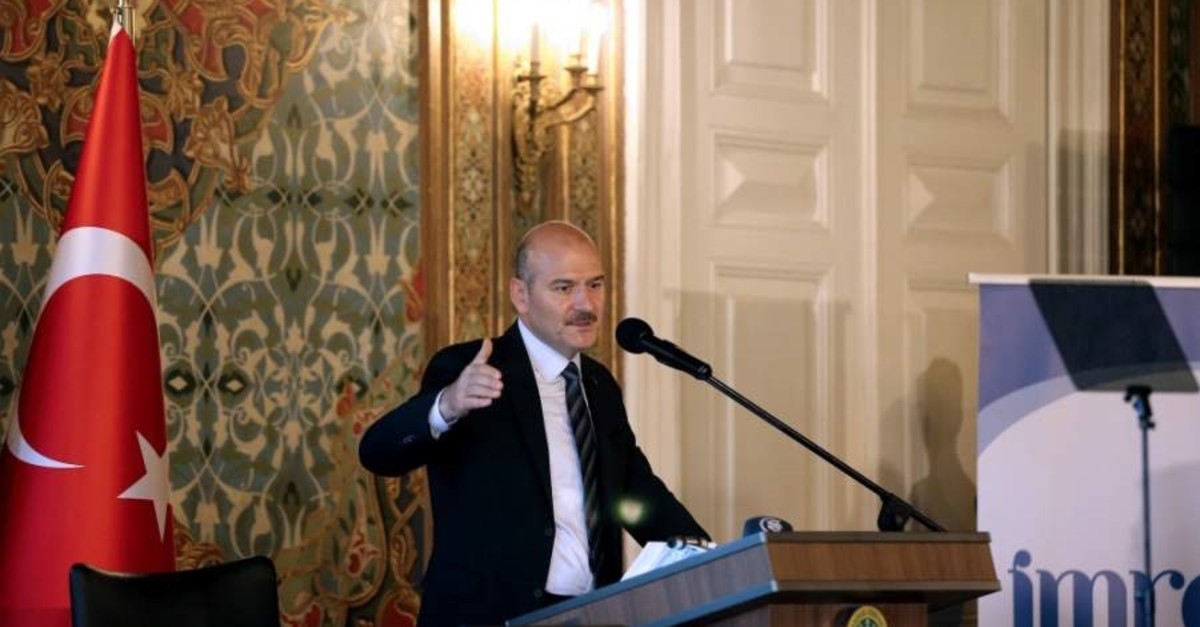 by Oct 21, 2019 3:34 pm
Turkey is actively managing migration, not blocking it, Interior Minister Süleyman Soylu said Monday.
Speaking at an international workshop on migration, Soylu said Turkey treats the issue of migration as a humanitarian phenomenon that needs to be managed rather than blocked.
“In order to manage it, one needs to understand why people migrate,” Soylu said, as he pointed to discrepancies in the income of the working class in southeastern Asia, the Middle East and Europe.
Soylu noted that Turkey’s Coast Guard plays an important role in managing migration by saving lives at sea.
“They are waging a significant struggle by using 70% of their capacity for migration-related work,” Soylu said, as he noted that the world is turning a blind eye to the lives lost in the Mediterranean, which has become a transit point for refugees heading to Europe.
Meanwhile, Soylu said Turkey has deported some 75,172 people since January and expects this number to reach 95,000 by the end of the year.
At least 4,407 irregular migrants were held across Turkey over the past week, according to security sources.
As many as 1,916 migrants were held in multiple operations carried out by gendarmerie forces in the northwestern Edirne province, bordering Greece and Bulgaria.
According to local security forces in Edirne, Greece has recently stepped up efforts to send irregular migrants to Turkey in violation of the Geneva Conventions, European Convention on Human Rights and the U.N. Convention Against Torture.
In the coastal provinces of Çanakkale, Balıkesir, Aydın, Izmir, Muğla and Antalya, the Turkish Coast Guard and gendarmerie forces rounded up a total of 2,227 migrants as they were trying to cross to Europe through Greece.
Turkey has been a key transit point for irregular migrants aiming to cross to Europe to start new lives, especially those fleeing war and persecution.
Separately, in the northwestern provinces of Kırklareli and Tekirdağ, 114 migrants were held by gendarmerie forces.
Moreover, border forces and police in the southern Hatay province caught 114 migrants for trying to enter Turkey from Syria through illegal means.
In the central province of Kayseri, a total of 36 migrants were held by police and gendarmerie forces.
The migrants included Pakistani, Congolese, Syrian, Iraqi, Iranian, Afghan, Tunisian, Kuwaiti, Moroccan, Egyptian, Libyan, Bangladeshi, Algerian, Somali, Ghanaian, Yemeni, Palestinian, Nepali, Eritrean and Nigerian nationals.
All of the migrants held during the week were either taken to hospitals for medical treatment or transferred to provincial migration offices.
Turkey has become a popular hub for illegal migrants seeking to cross into Europe amid escalation in conflicts, poverty and violence in the Middle East, Asian countries and Africa. Greek islands in close proximity with Turkey's Aegean shores are favorite destinations of migrants heading to Europe. However, journeys aboard unsafe, overcrowded boats often steered by inexperienced migrants turn out deadly. To reduce the number of illegal migrants on the dangerous Aegean Sea route, Turkey and the European Union signed an agreement in 2016. The deal stipulates that Greece is to send migrants held on its Aegean islands back to Turkey. In return, Turkey is to send Syrian migrants it hosts to various European Union countries. The deal also saw an escalated crackdown on human smugglers and increased sea patrols to prevent immigrants attempting to cross; for a while, it helped reduce the number. Yet, some desperate migrants still take the route even in winter, when a safe journey through the Aegean is nearly impossible aboard overcrowded, unsafe dinghies.
The country boosted patrols at sea and land but still struggles to stop the influx of migrants. Before their travel to western Turkey where Aegean shores are located, migrants enter Turkey from borders in the east and south.
Last Update: Dec 20, 2019 1:09 am
RELATED TOPICS