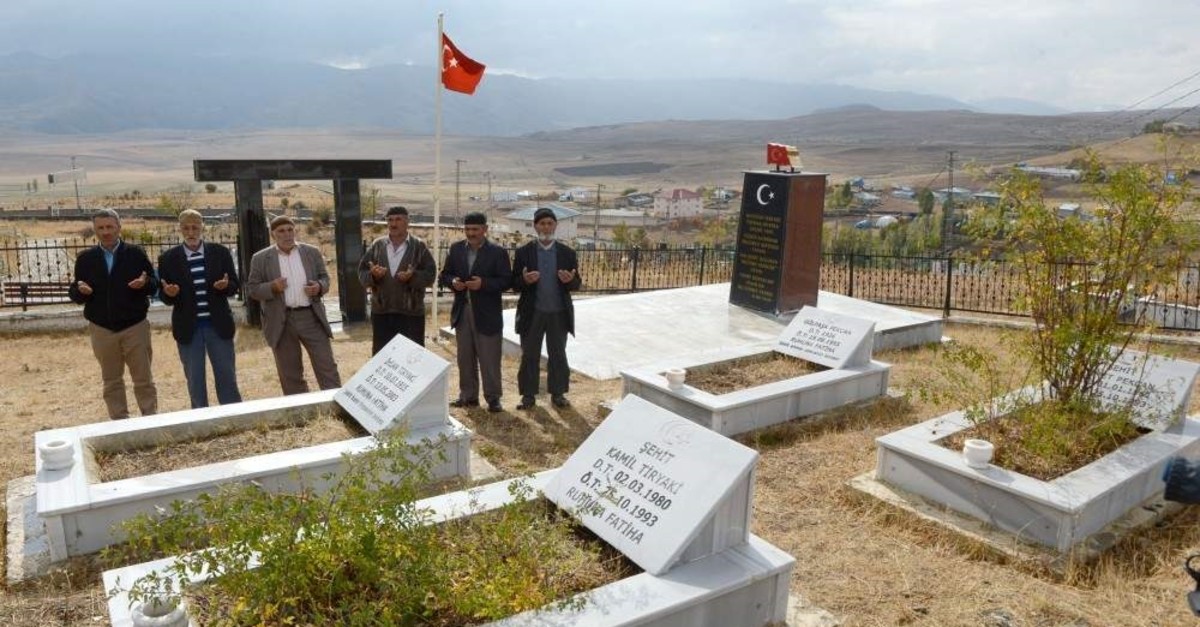 People pray at the graves of victims, Oct. 24, 2019. (AA Photo)
by Daily Sabah with IHA Oct 24, 2019 6:03 pm
Residents of the Yavi neighborhood in Turkey's southern province Erzurum will never forget the 1993 massacre conducted by PKK terrorists that killed 33 civilians, including five children.

On Oct. 25, 1993, the Yavi neighborhood of the Çat district in Erzurum saw one of the most brutal slaughters at the hands of PKK terrorists, who arrived in the town in a stolen van. The PKK terrorists raided a coffeehouse in the neighborhood, where people had gathered to watch the evening news, and fired at the people with long-barreled weapons, killing 33 and injuring 50.

Witnessing the brutal face of the terrorist organization, people of Yavi still remember the day of the massacre and feel the pain in their hearts as if it happened today. Abdülcelil Köse, who was seriously injured by seven bullets, told Anadolu Agency (AA) that the terrorists with guns arrived at the coffeehouse as people were watching the news. "The terrorists first asked for our identities," Köse said, adding: "They gathered us inside the coffeehouse along with some others from the street and turned the TV off."

"The PKK terrorists then opened fire on everyone inside, without a word," he said. "Thirty-two people were martyred at the scene. Hüseyin Dursunoğlu, who was injured, later died. My father and my uncle were also martyred, and my other uncle was injured," he recalled.

"We wish this incident hadn't happened. The pain we felt at that moment is still fresh today," Köse said.

Yıldırım Yavilioğlu, who survived the massacre without injuries, said those who are loyal to their state and nation were targeted on purpose.

"The first martyr of the massacre was Alaattin Akdeniz, who resisted them [the terrorists]. Then they opened fire on all the others," he said. "The gunfire did not stop for about 10-15 minutes," Yavilioğlu said, adding: "I saw them reloading their guns. The shooting continued even while they were fleeing with their van... That evening, I was having tea with my friend. I survived, but he died. I still feel the pain. It's impossible to forget what happened."
RELATED TOPICS