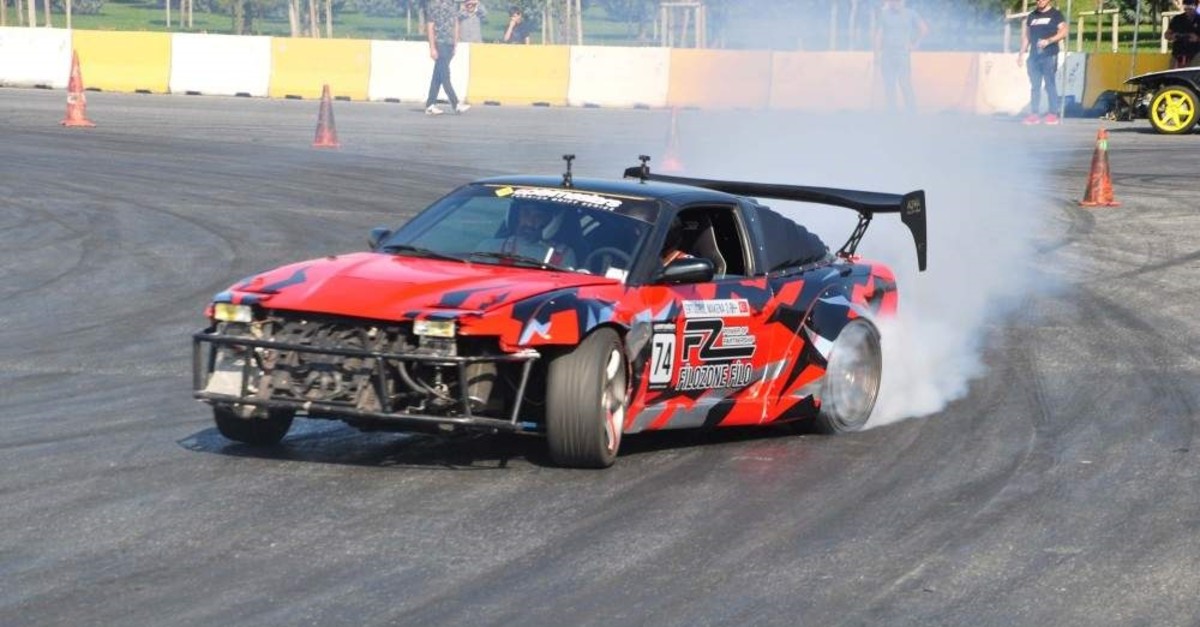 A drifter performs at the parking lot of a stadium in Istanbul, Oct. 27, 2019. (DHA Photo)
by daily sabah Oct 27, 2019 11:27 pm
Popular street racing films and a fad for modified cars has fueled a drifting mania in Turkey. Reckless drivers drifting in traffic in populated areas have been a contentious issue and faced public backlash. This is partly blamed on media presenting it as a dangerous practice by ignoring professional drifting. This affects fledgling motorsports in the country, professional drifters say.
Neşat Şutova, deputy head of Federation of Drift Motorsports Club, says drifting has only a history of 10 years in Turkey and is a very safe motorsport if “you play by the rules.”
“When the media portrays any car veering wildly as drift, all our efforts to promote this sport go up in smoke,” he told Demirören News Agency (DHA). This mistake is pretty common in public where any dangerous maneuver by reckless drivers can be called “drifting.”
The Drift Motorsports Club says genuine drifting by professional drivers following the rulebook of the Turkish Motorsports Federation and after undergoing training. It is also restricted only to closed-to-traffic areas, not highways or busy streets. Cars need to have proper safety measures as well. One such area is the giant parking lot of the Atatürk Olimpiyat Stadium in Istanbul where drifters regularly hold events and training sessions. Police and racing observers monitor the area during official drifting races. The venue is the first place in Turkey where professional drifters started training about a decade ago.
Şutova says they offer training to those with their own modified cars and enthusiasts who can learn how to do drift with vehicles provided by the club.
Mahmut Elbir, who took up professional drifting 10 years ago, said people usually have a prejudice against the drifters. “What we do is not the same as what people do on the street. We do it professionally,” he points out.
Cem Bora Kalaycıoğlu, founder of TeamART Motorsport Drift Team, one of the oldest drifting teams in Turkey, says they want to improve the sport’s place in Turkey. “We help anyone wanting to start the professional drifting with everything, from the custom building of cars to driving training,” Kalaycıoğlu says. He complains of terms used in describing drifting in the media. “Every illegal move people do, every violation of traffic safety is branded as drifting. This disturbs us. While custom building these cars, we follow the rules and we have extra safety rules than normal vehicles,” he says.
Last Update: Dec 20, 2019 1:16 am
RELATED TOPICS