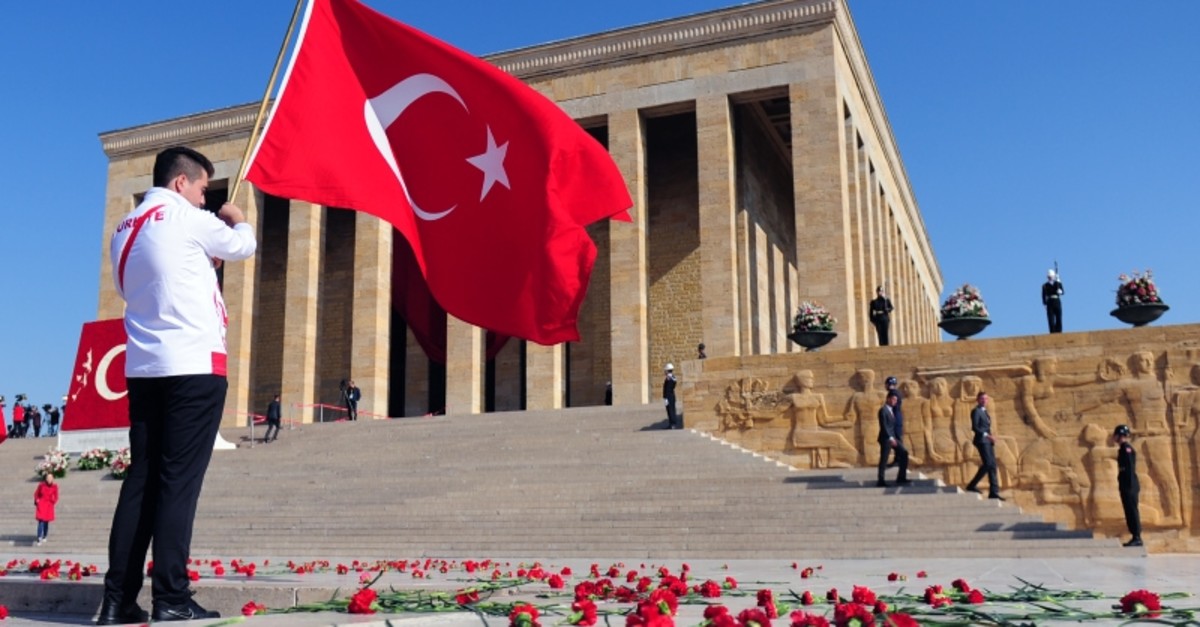 Turkey on Tuesday marked the 96th anniversary of the Republic, a revolutionary successor to the Ottoman Empire. Nationwide fervent celebrations were a sign of the spirit of early years as leaders pledged to continue on the path for independence as envisioned by the founders

With red and white flags everywhere Turkey marked the 96th anniversary of the proclamation of the Republic on Tuesday. The patriotic day was observed all across the country and by the Turkish diaspora. The central point of celebrations was in the capital Ankara where Mustafa Kemal Atatürk, the first president of the country, officially declared the
new title of the country and a new regime that succeeded the collapsed Ottoman Empire.
The day was an opportunity for the country’s leaders to renew pledges to pursue ambitions of Atatürk to keep the country independent, self-sufficient and a peaceful regional power. President Recep Tayyip Erdoğan and other top politicians paid their respects to Atatürk early morning with a visit to Anıtkabir, his mausoleum at the heart of the capital.
Atatürk was the de facto leader of Turkey or what is left of it after the Ottoman Empire was defeated in World War I, and it was him who led a war of independence against invading powers. Setting up an alternative government in Ankara, far from the Ottoman seat occupied by foreign forces, Atatürk sought a more democratic regime. “Gentlemen, we will proclaim the Republic tomorrow!” he is famously quoted as telling his close circle one day before the proclamation on Oct. 29, 1923, in his usual top-down approach in governing the country tattered by years of war. A vote at the Grand National Assembly followed and Atatürk was elected the first president of the Republic by a unanimous vote. Building upon the legacy of a semi-parliamentarian system in the last years of the Ottoman Empire, the new Republic introduced a wider democracy in the country and Atatürk is hailed as the great statesman who is credited with rebuilding a devastated country with new ideals.
Under President Recep Tayyip Erdoğan, the country declared a new set of goals under the motto of “Vision 2023” in reference to the centenary of the Republic. In economy, for instance, the government plans to increase national income to $2 trillion by 2023, increasing exports to $500 billion. Goals include a national health care system that will include every citizen, judiciary reforms, minimizing dependence on imports in defense needs and an active and efficient foreign policy.
"We are waging another war similar to the War of Independence, which we started a century ago and climaxed with the establishment of our Republic," Erdoğan said in a video message to the nation on the occasion. He said the nation was faced with another "historical fight" to protect its present and future. "All incidents that we go through from terror attacks to the treacherous coup attempt on July 15 [2016] are examples of this historical fight." He added that the anti-terror operations in Syria are also part of the war. Erdoğan noted that Turkey has faced indiscriminate attacks on its borders and economy, but the country has the "power, opportunity and determination" to overcome all these problems.

Ceremonies were held all across the country and in formal events, local officials laid wreaths on statues of Atatürk while big cities hosted parades and other public events like concerts to mark the day.
President Erdoğan received congratulations on the occasion from dignitaries at the presidential complex and later hosted a separate ceremony at the complex for guests from all around the country. Some 5,000 guests attended the ceremony, from celebrities and business people to athletes. Among other guests were soldiers and paramedics who served in Operation Peace Spring, Turkey’s counterterrorism operation in northern Syria. Citizens who made the headlines and won awards for their charity and social responsibility projects were also invited.
One guest standing out among them was Hacire Akar, the 49-year-old Kurdish woman who two months ago spearheaded a growing protest against the terrorist group PKK and its political affiliate, the Peoples’ Democratic Party (HDP). She and other families whose sons were abducted by the terrorist group and brainwashed into carrying out terror attacks, launched a sit-in protest in front of HDP offices in southeastern Diyarbakır province. Akar’s son returned home days after she launched the sit-in, encouraging others to join the protest.