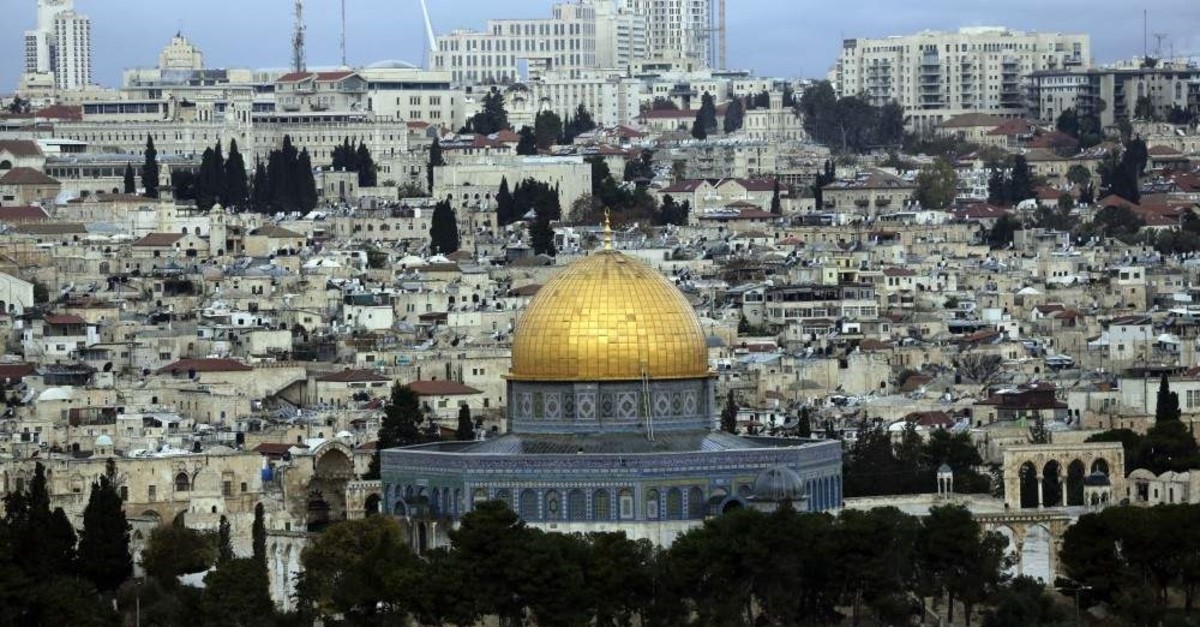 The Dome of the Rock against the backdrop of Jerusalem. The city was on the itinerary of Turkish pilgrims for many years until the Six-Day War. (AA Photo)
by Daily Sabah Oct 31, 2019 3:55 pm


The Presidency of Religious Affairs (DİB), the state-run authority overseeing Muslim pilgrimages abroad, is prioritizing Jerusalem as a top destination for umrah travelers. Umrah, a lesser pilgrimage compared to the annual hajj, involves a visit to Saudi Arabia where Islam’s holiest site Kaaba is located. Jerusalem hosted the first-ever qiblah, or direction Muslims should turn to while praying, before it was replaced with Kaaba as the new direction. The DİB lowered prices for Jerusalem tours, which travelers can attend without visiting Saudi Arabia or combine with the umrah pilgrimage.
Authorities aim to raise interest among Turkish Muslims in Jerusalem. Pilgrimage trips for the Muslim faithful with a stopover in Jerusalem were introduced in Turkey for the first time in decades four years ago, but they have not been regularly organized since then. Pilgrims have to register with the DİB and pay fees for trips. The first group of pilgrims will leave on Dec. 5 for a three-day trip to Jerusalem, and the DİB also offers a 16-day umrah pilgrimage with a Jerusalem stopover.
Remzi Bircan, head of the religious authority’s pilgrimage and umrah services, told Anadolu Agency (AA) that they held a workshop earlier this month for a comprehensive assessment of umrah tours with Jerusalem stopovers and analyzed possible challenges. “We want to increase the number of tours so we can maintain our citizens’ admiration of Jerusalem,” he said. “Jerusalem was our first qibla, and we want Turkish people to visit it, so we kept the prices low. We offer all the services people needed on tours,” Bircan said. He also said there were no security concerns for tours and that they offered a hassle-free tour of the city. Israel is known for its past practices of randomly restricting Turkish nationals’ travels to Jerusalem or denying visa applications.
Jerusalem is home to Al-Aqsa Mosque, one of the holiest sites in Islam, which was replaced by the Kaaba as qibla, the direction all Muslims are obliged to turn while praying. Muslims' access to the site is often subject to severe restrictions by the Israeli government, while severe clashes between Israeli forces and Palestinian faithful seeking to pray at the site are common. Jerusalem also houses tombs of the prophets Abraham, Isaac, Jacob and David, as well as Salman al-Farsi, a loyal companion of the Prophet Muhammad and Rabia al-Adawiyya, a renowned Muslim mystic.
Like umrah, visiting Jerusalem is not compulsory in Islam but Al-Aqsa Mosque is highly revered among Muslims as it is also believed to be the site of the Prophet Muhammad's ascension to heaven. Turkey has had strained relations with Israel after the infamous raid on a Turkish vessel carrying activists to Gaza under the Israeli blockade and criticism of Israel by the government leaders over attacks on Palestinians. The inclusion of Jerusalem onto the itinerary of pilgrims dates back 10 years when Turkey and Israel had relatively good relations. The Israeli Ministry of Tourism was working to promote Jerusalem as an additional pilgrimage destination, according to Turkish media outlets, the year before relations went downhill.
Jerusalem was Ottoman territory until 1918 and even after its capture by British forces that year, it remained part of the pilgrimage for Turks for decades. The Six-Day War in 1967 forced pilgrims to change their course.
Last Update: Dec 20, 2019 1:21 am
RELATED TOPICS