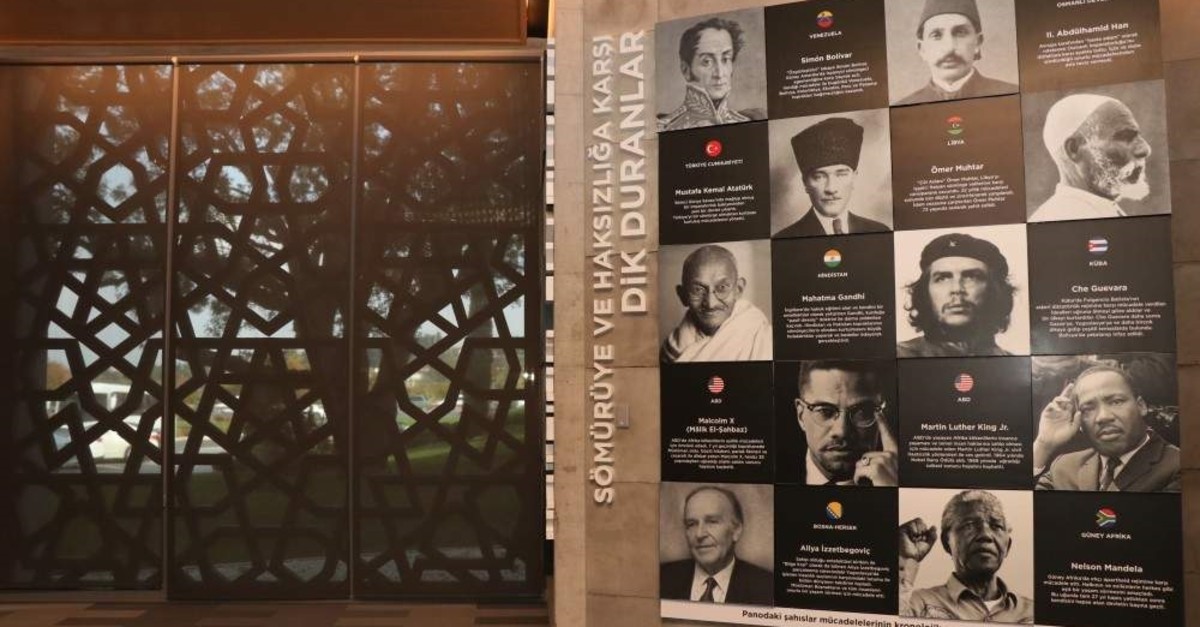 The Hafıza 15 Temmuz (Memory July 15) Museum in Istanbul saw a record number of 191,000 visitors in just three and a half months after its opening. The museum, named after the day in 2016 when the Gülenist Terror Group (FETÖ) tried to seize power with its military infiltrators, sheds light on the coup attempt as well as other coups in Turkey and across the world.
The museum, endorsed by the Turkish Presidency, was opened by President Recep Tayyip Erdoğan on the third anniversary of the coup attempt that killed 251 people and injured nearly 2,200 others. Run by the July 15 Association, it hosts multiple exhibitions of items belonging to the coup victims.
The museum’s different sections inform visitors both on coups in Turkey and the history of colonialism. The two-story venue built on an area of 1,500 square meters and located next to the Asian entrance of Istanbul’s July 15 Martyrs’ Bridge, welcomes visitors with a giant “Do Not Forget” sign at the entrance and the names of people killed by putschists in the 2016 coup attempt. White pigeon sculptures representing each victim have been placed on the ceiling of the entrance. A giant screen opposite the entrance features videos and documentaries about the coup attempt.
Among the items on display at the museum are the beret and dagger of Ömer Halisdemir, the military officer and anti-coup hero who shot dead a senior putschist but was killed by the latter’s men during the 2016 coup attempt. Another interesting item is the cellphone journalist Hande Fırat used during the coup attempt. It was via this cellphone President Recep Tayyip Erdoğan, who was being hunted down by putschists, made a historic video call and urged the public to stand against putschists. In another corner is the bullet-riddled helmet of Bilal Özyıldırım, who was injured while he was riding his motorcycle to an Istanbul bridge to join the anti-coup crowd when putschists opened fire. Other bullet-riddled items belonging to survivors that tell the story of the night are also on display, including a car crushed by tanks controlled by putschists. A set of stairs built on one wall of the museum contains the shoes of the coup attempt’s slain victims, while ammunition used by putschists is exhibited in another section.
The museum also contains touch screen panels with biographies and photos of coup attempt victims, as well as the history of coups and colonialism. In a hall entitled “Martyrdom Awareness,” visitors can watch 3D videos about the 2016 coup attempt.
Another section of the museum is dedicated to iconic figures who stood against colonialism, from Mustafa Kemal Atatürk and Ottoman Sultan Abdülhamid II to Mahatma Gandhi, Aliya Izzetbegovic, Simon Bolivar and Che Guevara, with details of their struggles explained for visitors through panels of text and photos.
Abdurrahman Tarık Şebik, head of the July 15 Association, told Anadolu Agency (AA) that their museum was different in its concept from other museums around the world. “This is simply a place to keep memories of our martyrs alive, to show the spirit of resistance on that day and inform future generations, to make them remember the traitors behind the coup attempt,” he said. Şebik says the museum had a higher number of visitors on national and patriotic holidays, such as Republic Day on Oct. 29. “We had 6,000 guests that day,” he says, adding they expect to “exceed 1 million visitors in one year.”

The coup attempt was unprecedented in terms of the culprits and opponents and the unique resistance against the putschists that made history in the Republic of Turkey, which has been accustomed to coups since its first one in 1960. Unarmed civilians confronted tanks heading to critical locations, such as the Presidential Complex, where bombs fired by putschists' warplanes killed several during the coup attempt. The coup attempt was the third try by FETÖ to topple the government. Unlike its previous two attempts in 2013, the terrorist group employed its infiltrators in the military; officers who were recruited by the terrorist group secretly from their time in military school, were lying in wait to undertake the coup attempt. The country's elected leaders called on the public "to reclaim democracy" and boosted the morale of crowds who were already gathering in cities to oppose the putschists. Despite the bloodshed that injured hundreds of others, the putschists were forced to surrender in the face of increasing public outrage.