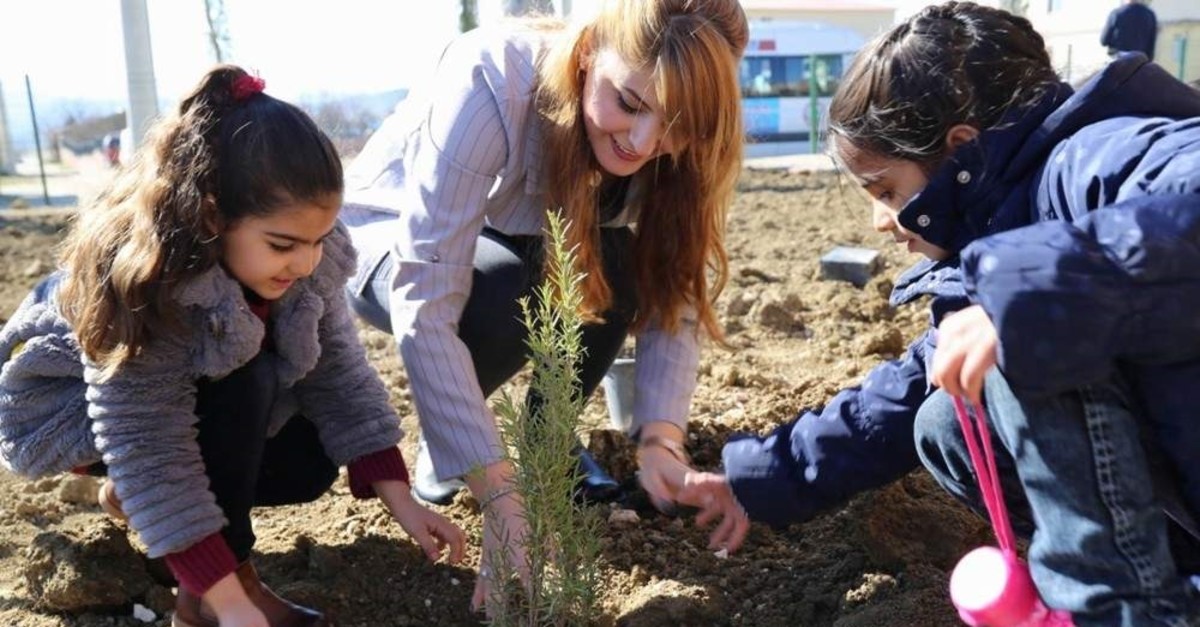 Students plant a sapling with their teacher in this undated photo, Diyarbak?r, Turkey. (IHA Photo)
by Daily Sabah Nov 07, 2019 4:26 pm
President Recep Tayyip Erdoğan on Thursday declared Nov. 11 National Forestation Day, as millions of people in Turkey prepare to plant millions of saplings for a record-breaking campaign.
In an official notice, Erdoğan said Nov.11 was declared a national holiday in line with the Ministry of Agriculture and Forestry’s mass tree planting campaign on the same day to raise awareness about the importance of forests and their sustainability.
Saying that the preservation of natural beauty has always been on the government’s agenda, Erdoğan said the event will be carried out to increase total forest coverage, improve biodiversity, fight erosion and promote environmental consciousness.
“We have no doubt every single one of our citizens will volunteer for the event that will set a new record with 11 million saplings to be planted in three hours across 2,023 points in our 81 provinces,” the Erdoğan said.
“We have decided to declare Nov. 11 National Forestation Day to leave a greener, healthier country to future generations and to also protect and better manage our forests that play key roles economically, ecologically and sociologically,” the president’s notice read.
Erdoğan said all public institutes will offer support to the campaign, and the government will make every opportunity available to carry out the event to its full potential.
The mass tree planting event made headlines in July when Erdoğan responded to Abdullah Enes Şahin, an environmental activist who urged state officials to designate a specific day for planting trees. Welcoming the suggestion, Erdoğan said he would make it happen.
Soon after Şahin’s message went viral, the Agriculture and Forestry Ministry launched the campaign in August. The campaign initially aimed to plant 3 million saplings in one go and to make it into the Guinness Book of World Records, but the number quickly grew as the campaign drew large amounts of interest from citizens.
Agriculture and Forestry Minister Bekir Pakdemirli said Turkish people expressed immense interest in the Nov. 11 event, with the slogan "For a Greener Turkey." So far 13 million trees have been adopted, and millions of people are set to take part in the mass planting.
"The campaign attracted some overwhelming attention. We expected to complete the adoption process for the 11 million trees by next week. But as of this morning citizens of all ages have adopted almost all of the saplings,” the minister said and added that citizens in Turkey and abroad could adopt or donate trees with this campaign.
India currently holds a slightly different record with more than 220 million trees planted in one day in the state of Uttar Pradesh earlier in August. Ethiopia also achieved the same record of more than 220 million trees in July.
The planting events will be simultaneously held across Turkey but will concentrate on two western cities, İzmir and Muğla, where fires have destroyed hundreds of hectares of forests.
Amid a construction boom and concerns over global warming, Turkey has stepped up efforts to preserve and further expand its forests.
According to a Justice and Development Party (AK Party) report that explains the activities and performance of the government between 1992 and 2002, the government oversaw afforestation work on some 743,000 hectares of land. This number increased sixfold between 2003 and 2017. During the last decade of the AK Party-led government, 4.9 million hectares were used for forestation. The same report revealed that some 1.5 million hectares of new forests were also planted across Turkey.
Last Update: Dec 20, 2019 1:31 am
RELATED TOPICS