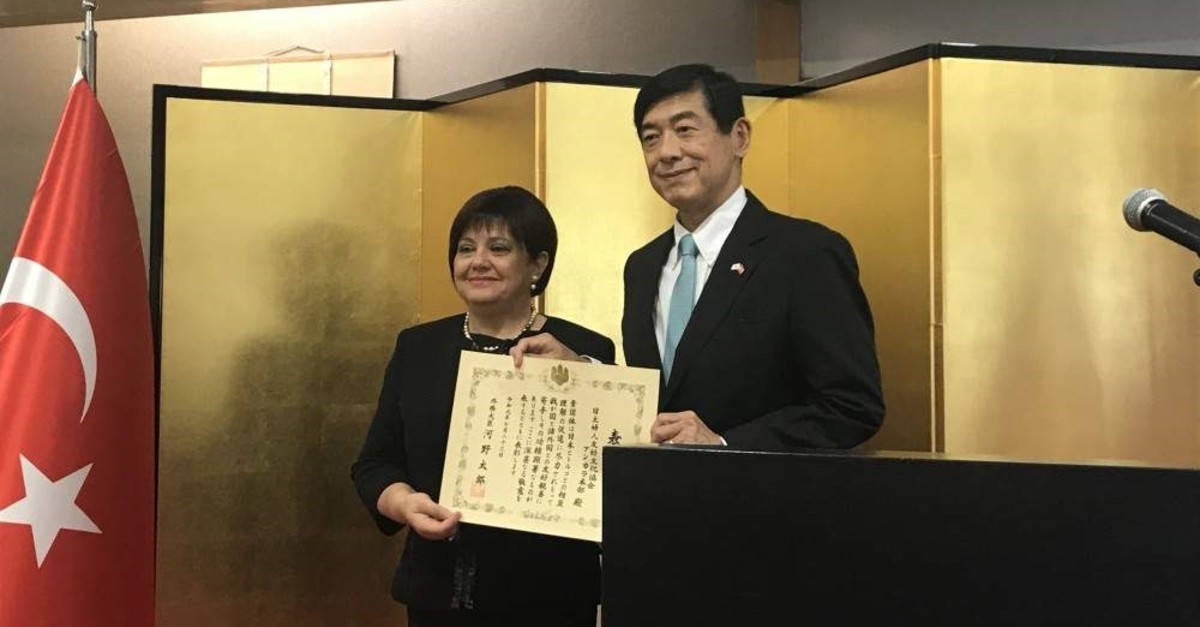 Japanese Ambassador to Ankara Akio Miyajima presents the award to the head of the association, Zeynep Erencan, Ankara, Nov. 8, 2019. (PHOTO BY D?LARA ASLAN)
by Nov 08, 2019 5:51 pm
The Turkish-Japanese Women's Cultural Association was presented an award by the Japanese Foreign Ministry in Ankara on Friday during a ceremony at the residence of the ambassador of Japan for strengthening the relations between the two countries and bringing them closer together.
The ceremony started with an opening speech by the Japanese Ambassador to Ankara Akio Miyajima, who thanked the association for its contributions to Japan, and emphasized that even though Turkey and Japan are geographically far apart, the friendship of the two countries is solid.
Speaking to Daily Sabah, the head of the association, Zeynep Erencan, who has lived in Japan and is therefore acquainted with Japanese culture and language, stated: “I am very proud to have been awarded this prize. We, as members, and Turkey, as a country, are very happy. It is also a great honor that this award coincides with the 50th year (of the founding) of our association. Our oldest member is also with us now, since 1969.”
Adding that the ambassador and his wife greatly contributed to the association through various means, including organizing sushi days for a scholarship fund, Erencan said, “The ambassador has shown great support in preparing this event; we have even been working on Sundays.”
The association, which was established in 1969 in Ankara, continues to promote friendship and solidarity between Turkish and Japanese women, and is the first of its kind. The association gives scholarships and language courses, plans cultural activities and trips, and introduces Turkish culture to Japanese people, such as taking them to traditional Turkish weddings.
The award presented by the Japanese Foreign Ministry is given to individuals or groups that serve to enhance the relations between the two countries.
“Japanese culture has deep roots, and we want to introduce them here while also introducing Turkish culture to the Japanese people,” Erencan continued.
Last Update: Dec 20, 2019 1:33 am
RELATED TOPICS