Over 500,000 register for organ donation in Turkey 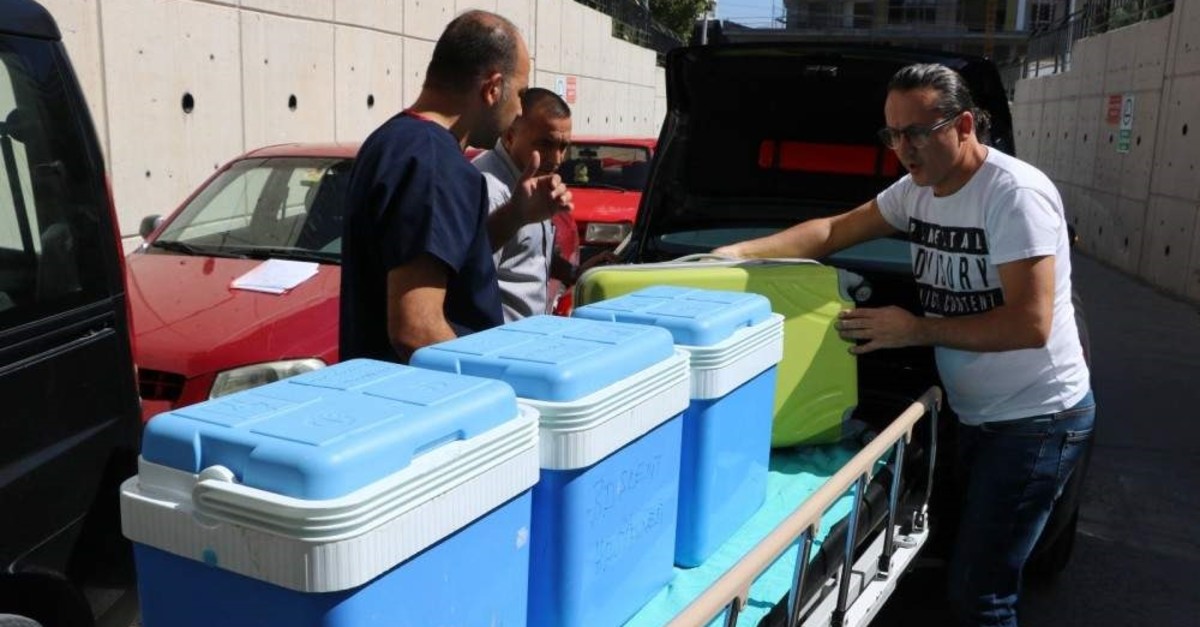 An undated photo of donated organs in boxes being transferred to an ambulance for transplant.
by Daily Sabah Nov 10, 2019 2:16 pm
The number of organ donors in Turkey has risen to 502,000 after increased awareness due to campaigns conducted during National Organ Donation Week, Health Minister Fahrettin Koca announced Sunday.
According to Koca’s statement, Turkish doctors performed 4,710 organ transplants in the past 10 months in 148 transplantation centers across the country. “Our country has the largest number of transplants performed in Europe,” the minister said, and added that 75% percent of the organs were sourced from living donors, while the rest were harvested from cadavers.
The minister said while the number of donors was increasing, it was still not enough as more than 29,000 people were registered on organ waiting lists across Turkey.
Koca named Izmir as the city with the most organ donors, with 71,000 donors, followed by Istanbul and Kocaeli with 57,500 and 37,000, respectively.
“I extend my gratitude to those who have shown sensitivity to a vital issue such as organ donation. You too can become a hope for patients by signing up for organ donation,” Koca said.
According to the data of the Turkish Transplant Coordinators Association, Turkey ranks among the first three countries in live transplants because it is a technologically advanced country in terms of field experience.
Around 2 million people in the world, including the 29,000 people in Turkey, are on waiting lists for organ transplants. Unfortunately, about 10% of these patients pass away each year before getting access to a matching organ.
Considering that every year up to 5,000 new people are added to the organ transplant list, Turkey needs at least 25 organ donors per million a year. Although the country is far from this goal, every year more and more people are becoming aware of the importance of becoming organ donors.
Turkey marks Organ Donation Week every year, from Nov. 3 to Nov. 9, to promote and raise awareness about organ donation.
To donate an organ, the donor can apply to all state and private hospitals as well as community clinics and health directorate. The donor is given a card upon giving consent and they are registered on the health ministry's organ and tissue transplant database.
Last Update: Dec 20, 2019 1:34 am
RELATED TOPICS