Atatürk remembered on 81st anniversary of his death 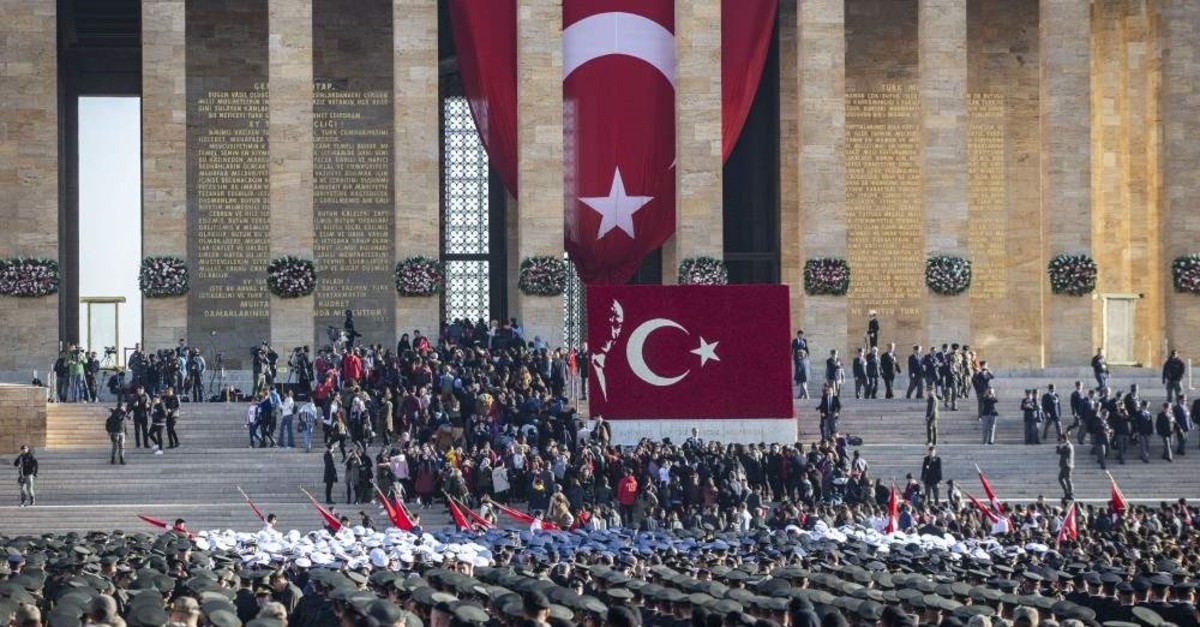 Mustafa Kemal Atatürk was remembered on Sunday on the 81st anniversary of his death, with the nation united to mourn the founder of modern Turkey

Millions of Turks across the country on Sunday marked the 81st anniversary of the passing of Mustafa Kemal Atatürk, the leader who led the country's war of independence and laid the foundation of the Republic of Turkey.

As is customary, daily life stopped at 9:05 a.m. local time, sirens wailed to mark the exact moment of Atatürk's death at the age of 57 and millions of people across the country observed two minutes of silence. Turkish President Recep Tayyip Erdoğan and other senior politicians visited Anıtkabir, Atatürk’s mausoleum, on the occasion and laid wreaths in memory of the late leader. People gathered for events in 81 provinces and in places where the Turkish diaspora lives abroad to remember the legendary leader. People laid wreaths before statues of Atatürk, who remains one of the most beloved figures in the country for his amazing feats that shaped the future of the country.

Atatürk was born in 1881 in the Greek city of Thessaloniki, then part of the Ottoman Empire. His military education started in 1893 when he was enrolled in a military school in Thessaloniki. He continued his education at the Military Academy of Istanbul and then graduated as second lieutenant in 1902. With his extraordinary skills, Atatürk quickly climbed military ranks, becoming a captain in 1905. The year 1911 marked a significant point in Atatürk's life, as he fought the Italians in Tripoli and won a decisive victory, proving his skills in the military field. However, this huge success was nothing compared to what the future held for him. He drew the attention of his subordinates with his outstanding services following the start of the Balkan Wars in 1912. He played a significant role in recapturing Dimetoka and Edirne provinces. In 1914, World War I started and the alliances deployed soldiers on the Gallipoli peninsula and the battle of Dardanelles (Çanakkale) started. Atatürk and Turkish soldiers made history by showing incredible resistance. Atatürk's order to his soldiers at the war still echoes in the hearts of all Turks: "I don't order you to attack, I order you to die!"

His star continued to shine during his services in northwestern Edirne province and southeastern Diyarbakır province in 1916, earning a major general title the same year. He fought against the British army in Damascus in 1918 and led successful resistance against it. Following the occupation of Istanbul by the allies, in 1919, Atatürk went to northern Samsun province as the inspector of the 9th army, which changed his life completely, and Turkey's eventually. After he said that the liberation of the country from the occupant forces could only be possible through the will of people, he organized two congresses, in Sivas and Erzurum provinces, where the battle of independence and the country's future was discussed.
On April 23, 1920, the Grand National Assembly of Turkey was established and Atatürk was elected as the head of the government and speaker of the parliament, which enabled him to adopt laws essential to beat occupying forces. The battle for Turkish independence started on May 15, 1919, when the first bullet against the occupant Greek forces was fired by Hasan Tahsin, a Turkish journalist who was killed shortly after his action.

The Turkish army, under the leadership of Atatürk, won incredible battles against occupant forces, including the first and second Battles of Inönü, Sakarya, Great Offensive, until 1923 when the Lausanne Treaty was signed on July 24. The incredible achievements on the battlefield led to Turkish independence, and the Republic of Turkey was founded on Oct. 29, 1923. Atatürk became the first president of the republic until Nov. 10, 1938, when he passed away in Istanbul at the age of 57 due to cirrhosis disease.

As a tradition, Turkish people visit his mausoleum in Ankara every Nov. 10 and pay tributes to Atatürk.
Erdoğan, who attended a separate commemoration ceremony at the Presidential Complex for Atatürk, lamented the exploitation of the founder’s legacy by those “seeking to defame our history.”
“They wear the pro-Atatürk mask and they gush hatred to our history to extol Atatürk’s services to this country and to extol the Republic. They are ashamed of their history. They hate this nation secretly. We will not allow Atatürk or the Republic to be left in the hands of this abusive mindset,” Erdoğan said. He was referring to critics of the Ottomans that preceded the Republic of Turkey who advocate this former Ottoman pasha’s feats as an antidote to what they called the oppressive regime of the Ottoman monarchy.
The president said Atatürk was one of the most important carriers of the values of the nation as someone “who, by starting the War of Independence, gave this nation a new ambition when it faced destruction.” “Of course, Atatürk may have his own shortcomings but this can be debated by experts and still this would not stain his place in the hearts of this nation. It is sad we still talk about these issues on the centenary of the War of Independence and the 81st anniversary of Atatürk’s passing. The greatest contribution to Atatürk’s legacy and the Republic is standing behind our unity in this critical period,” Erdoğan said.
Although Atatürk is a revered figure, a cult of personality shaped by the secular elite after his death makes it impossible for an objective approach to his deeds and life in Turkey. The president also criticized “the industry of Atatürk and the Republic.” “Our nation knows well how our country is exploited economically and its democracy was damaged by people distorting those two words to use them as a pretext for their actions,” Erdoğan said. He was referring to multiple coups under the pretext of continuing the principles of Atatürk and the Republic. He was also referring to political parties who promoted themselves as adherents of Atatürk’s values but whose governments failed to reflect Atatürk’s ambitious efforts in service of the progress of the fledgling country in their policies.