Draft bill to step up fight against illegal construction 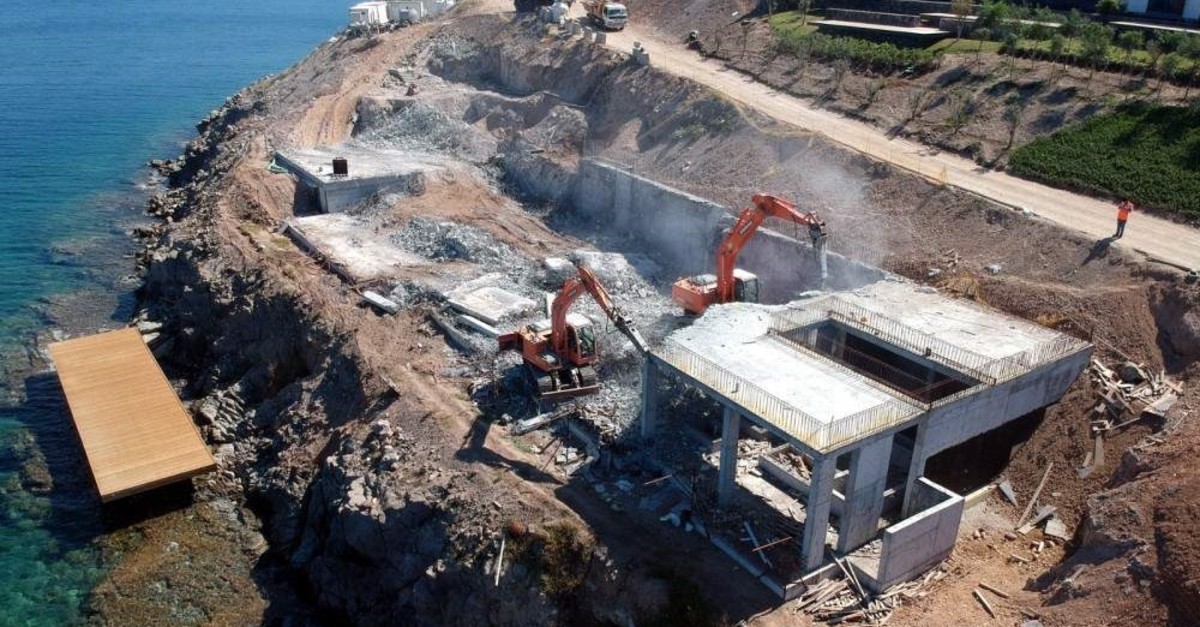 This undated photo shows an illegal structure being demolished in Bodrum, a popular resort town in southwestern Turkey.
by Zübeyde Yalçın Nov 13, 2019 7:46 pm

From piers to inland settlements, all illegal buildings will face imminent demolition order if a draft bill by the ruling Justice and Development Party (AK Party) gets the green light.
The party is preparing to wrap up the comprehensive bill that seeks a solution to the long-standing issue of illegal construction. Illegal construction is blamed on haphazard zoning plans that aggravate the problem, especially in big cities and for decades, governments have turned a blind eye to the issue as the population swelled.

The bill includes 80 articles and will be presented to Parliament in the coming days. It will bring heavy penalties and fines for illegally constructed structures and pave the way for their swift demolition.

It particularly concentrates on “building pollution” on popular coastlines, especially in towns that attract a large number of tourists. All shores will be compatible with construction regulations and any building, from residential complexes to hotels and piers which violate construction code will be demolished.
Amid growing criticism of buildings dotting the shores of Bodrum, one of Turkey's most popular resort towns, the government launched in August a fight against illegal construction. It gave a deadline to construction companies to either demolish or fix illegal additions to buildings.
Photos of buildings in Bodrum, on the coast of the southwestern Aegean province of Muğla, went viral on social media recently, with people decrying the "eyesore" buildings, from hotels to apartment complexes on the pristine beaches flanked by hills, where trees were chopped down for construction.
According to Environment and Urban Development Ministry, there are more than 20,000 illegally built structures across Turkey and at least 7,200 among them are on coastal strips, mostly in southwestern Turkey where Bodrum and other resort towns are located.
Illegal construction tops the government's agenda at a time of a construction boom across Turkey. The government set out a new road map for construction and urban transformation – replacement of old, decrepit buildings with new ones – earlier this year.
The road map aims to make any changes to construction plans more accessible to the public. Under an action plan, the government will also bring transparency to the construction process for each building and large-scale changes to construction will only be approved with agreement of nonprofit organizations and citizens while special courts will be set up to handle lawsuits involving illegal construction and related issues.

Under the draft bill, a supreme board will be established to oversee the regulations and a national geography database will be set up, allowing observation of all construction regulations on national and local levels [of municipalities’ own regulations].
The bill also brings tighter control to Structure Inspection Boards tasked with inspecting buildings for their compliance with construction regulations. Boards neglecting the inspection duties will be heavily fined.

For the demolition of illegally built structures, the government will issue a warning first to owners for demolition and if they do not comply, they will be demolished by force and owners will be mandated to cover the demolition costs, under the draft bill.