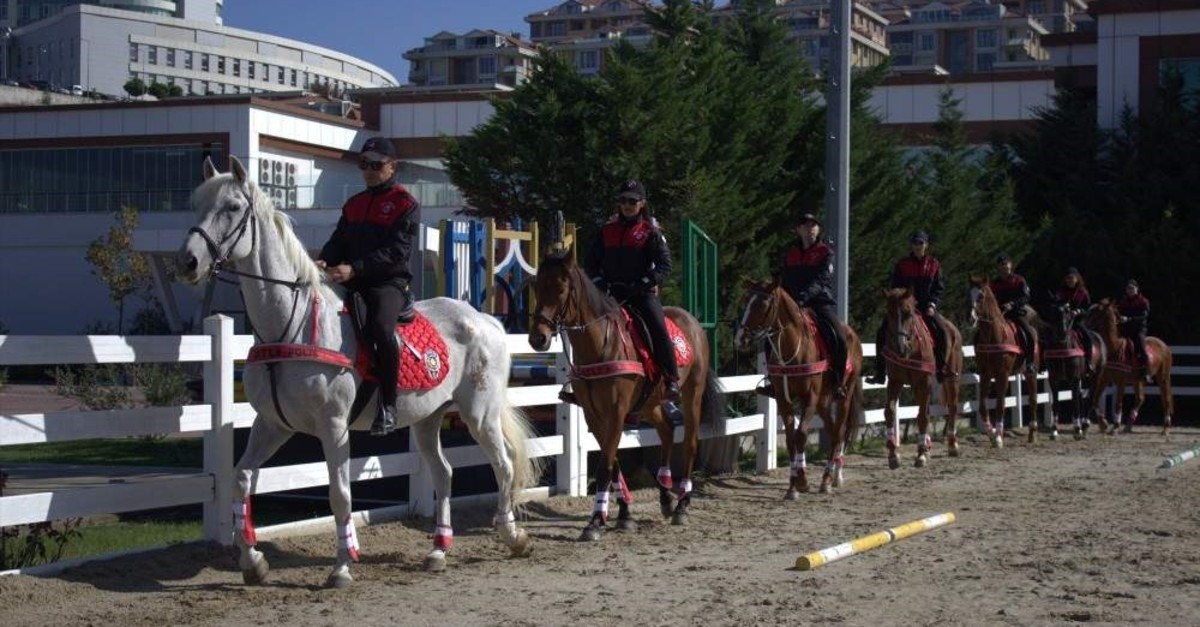 by Daily Sabah Nov 14, 2019 3:51 pm
Introduced a year ago, Istanbul's mounted police force has undergone dozens of grueling training exercises to uphold order and to better respond to public events. Consisting of 18 police officers, the squad participates in daily exercises in Istanbul's Büyükçekmece district.
While the daily training program includes the usual riding exercises for the officers, the horses themselves are trained to remain calm in stressful situations. The eight horses of the squad regularly find themselves dashing through smoke bombs or being swarmed by an angry crowd of protesters, all parts of scenarios prepared to strengthen their mental preparedness for any possible event.
Speaking to Demirören News Agency (DHA), squad chief Sinan Polat said training was a key part of keeping the squad ready. "We practice how to form a circle around a criminal. We also use smoke bombs, while we teach our officers how to respond to events without panicking the horse. If we are not on duty, we constantly train here," Polat said.
"Right now, we patrol in Sultanahmet and Taksim squares, along with several coasts of Istanbul. We also go on duty at various festivals or events. We usually go where large crowds are or places where police cars can't enter," Polat said.
According to Polat, work is underway to expand the squad's size, with both officers and horses. "We need to rotate the officers riding the horses every hour because riding is tiring after a while," he explained.
The mounted squad is popular among Istanbulites, as surprised citizens often take selfies with the officers. The squad also proved its worth when it was deployed during the New Year's Eve celebrations in Taksim, when hundreds of thousands gather at the square, rendering police cars utterly useless.
Last Update: Dec 20, 2019 1:41 am
RELATED TOPICS