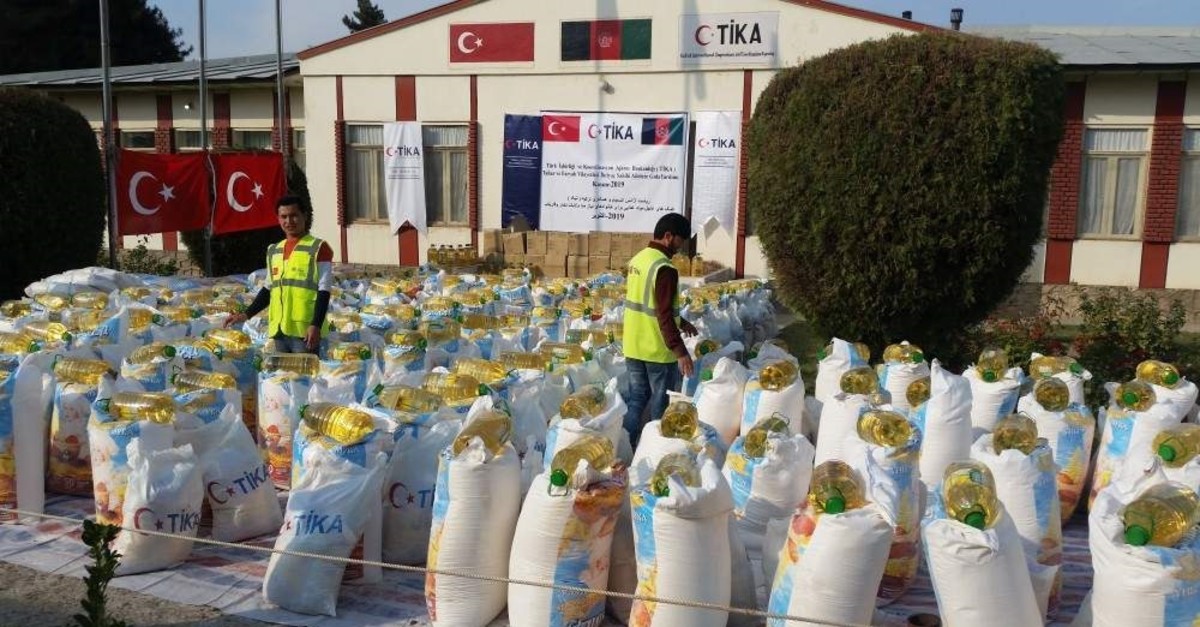 Packages of food outside a TIKA office stand ready to be delivered to families affected by war in Afghanistan, Nov. 18, 2019. (AA Photo)
by Daily Sabah Nov 18, 2019 7:18 pm
The Turkish Cooperation and Coordination Agency (TIKA) provided food aid to 1,000 families affected by war in the Tahar and Faryab provinces of Afghanistan, a statement from the agency said Monday.
The statement, which was released by the Mazar-i Sharif branch located in northern Afghanistan, said the aid was distributed in Tahara province’s districts of Yengi Kale, Derkad, Hoca Bahauddin, Chah Ab, Hoca Gar and Baharak and the Kurgan district of Faryab province where people were in need due to recent terrorist incidents and domestic conflicts.
The aid packages included flour, rice, oil, granulated sugar, green tea, tomato paste, salt and kidney beans, the statement added.
The organization also said it distributed 10,000 books in Kazakhstan in cooperation with the Literary Work Owners Society of Turkey (İLESAM) and the country’s Culture and Tourism Municipality under the scope of a project initiated by the İLESAM.
The books were delivered in a ceremony held in the Kazakhstan National Library with the participation of TIKA Nur Sultan Coordinator Evren Rutbil, İLESAM Chairman Mehmet Nuri Parmaksız and a number of Kazakh authors.
Parmaksız said the books, which included various types of novels, poetry, sociological books, law books, encyclopedias, anthological books, cultural and art books, and history books, will be distributed to several libraries in the Kazakh capital as well as to the Ahmet Yesevi International Turk-Kazakh University’s library.
Speaking during the ceremony Parmaksız noted, “The book is the strongest bridge between countries in terms of language, culture and literature,” adding those books written in a Latin-based alphabet are important for the process of Kazakhstan changing their official alphabet from Kirill to Latin.
Parmaksız also noted they previously gifted 15,000 Turkish books to Azerbaijan, and 10,000 other books will be delivered to Kyrgyzstan this week as well.
TIKA Nur Sultan Coordinator Rutbil said they are happy to be part of such a comprehensive project. Saying that there is a huge demand for Turkish books in Kazakhstan, especially from students of the Turkology Project, Rutbil added: "Not only students, anyone who wants to learn Turkish culture can benefit from Turkish books from libraries.”
Rutbil added that TIKA also carries out projects for the Kazakh language as well, along with Turkish.
Active in 59 countries with 61 offices, TIKA was founded with the purpose of helping former Soviet nations after the collapse of the Soviet Union and was a little-known state apparatus before it rebranded itself in the past decade as a major source for the country's international clout. It has reached out to more people in need across the globe and developed projects in the remote corners of the world.
Last year, it was placed under the supervision of the Culture and Tourism Ministry, further expanding its projects in coordination with other public agencies.
The agency also taps into local human resources with its "experience exchange program" that involves trips for Turkish students to several countries where TIKA is active. Students both become familiar with ongoing projects in those countries and take part in them, delivering aid and helping communities.
Last Update: Dec 20, 2019 1:46 am
RELATED TOPICS