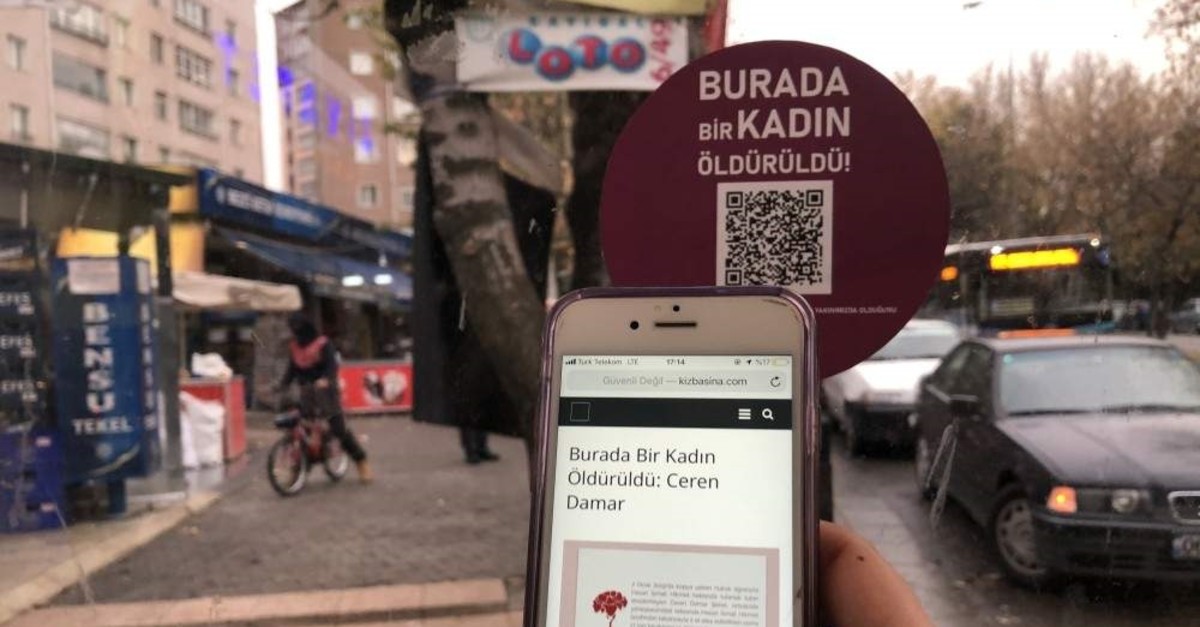 A street sign near the scene of murder of Ceren Damar, a lecturer killed by her student on Jan. 2, 2019 in the capital Ankara. (AA Photo)
by Daily Sabah Nov 25, 2019 2:02 pm
“A woman was murdered here!” a small, unassuming street sign on a busy street in the capital Ankara reads. Under the text, a large QR code is placed. By scanning the code with your cellphone, one gains access to a brief text containing a chilling account of a murder that took place at that location. It is among dozens of such signs which have been erected near crime scenes by a nonprofit group in order to raise awareness on women’s murders.
Incidents of women being murdered by their husbands or family members have come into the spotlight in recent years, making headlines across the nation. The Kız Başına (Just A Girl) Platform, seeks to etch memories of these brutal murders in the public imagination with their “digital clovers” project. Instead of leaving flowers at the crime scene, people can read about the background of the incident in order to better commemorate the victim, members say.
Just A Girl was originally conceived by a group of volunteers as a means of examining hate speech, violence and harassment towards women. It aims to make the problems women face more visible and to offer victims assistance.
The QR codes, currently available in 72 provinces of the country, give access to news stories describing the murders, victims and perpetrators.
Elifcan Fırat, Istanbul representative of Just A Girl, told Anadolu Agency (AA) that the main intention of the “digital clovers” project was to build a kind of memorial for the victims, which was otherwise lacking. “We want to remind people that, as a society, we are responsible for these murders. Chances are that a murder has taken place along the street you take on the way to work. Violence is always nearby,” she says.
Fırat says the group trained students volunteers from Middle East Technical University on how to write news stories without glorifying violence, using the texts for these digital commemorations on their website, before converting them into QR codes to be placed next to street signs.
Last Update: Dec 20, 2019 1:54 am
RELATED TOPICS