Djibouti's biggest mosque, courtesy of Turkey, counts down to opening 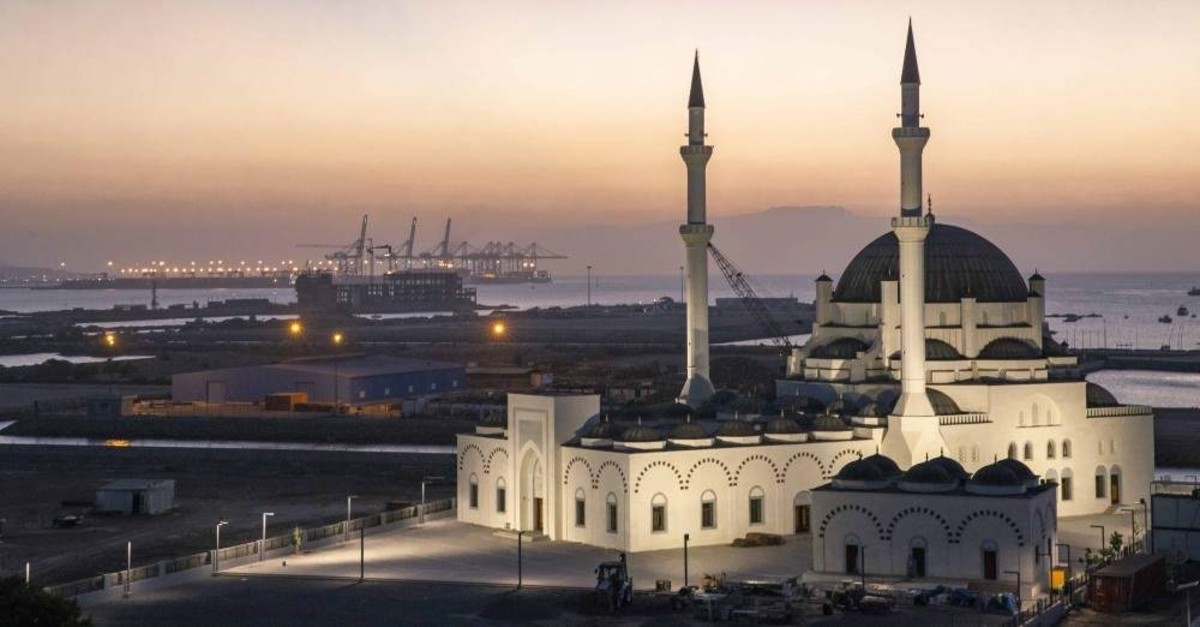 The mosque is situated in an area reclaimed from the sea. (AA Photo)
by Compiled from Wire Services Nov 25, 2019 4:44 pm

The largest mosque of Djibouti, whose construction was kicked off four years ago by Turkey's Diyanet Foundation, is set to open later this month as a sign of stronger bonds between the two countries

Four years after its foundation was laid, the Abdülhamid II Mosque and Complex in Djibouti will open later this month. Built by the Turkish Diyanet Foundation (TDV), the 6,000-capacity mosque will be the largest in the East African country when it opens.

The mosque, which bears distinctive features of Ottoman architecture, is named after the prominent Ottoman Sultan Abdülhamid II. The Ottomans maintained good relations with the African country for about four centuries, and the Republic of Turkey has continued this tradition.
The idea for a mosque was conceived during President Recep Tayyip Erdoğan’s visit to the country in 2015. Djibouti President Ismail Omar Guelleh said during Erdoğan’s visit he wanted to see a mosque featuring Ottoman architecture and “hear the adhan [Islamic call to prayer] like it is recited in Istanbul."

The mosque in the country’s capital Djibouti City is built on land reclaimed from the sea in the Salines Ouest district, where the presidential palace is also located.
It covers more than 13,000 square meters and will be the largest landmark in the capital and its immediate region. Senior Djibouti officials and Turkish Parliament Speaker Mustafa Şentop are expected to attend the opening ceremony.

The TDV, which is affiliated with Turkey’s Presidency for Religious Affairs (DİB) and oversees construction of mosques in Turkey and abroad, imported the majority of the materials used in construction from Turkey.
The mosque has two 46-meter tall minarets, a 27-meter high dome and walls adorned with classic Ottoman calligraphy. Its simple design seeks to blend in with local architecture though its interior reflects the distinct Ottoman features, like huge chandeliers resembling Ottoman-style lighting in Turkish mosques. The mosque’s domes, covered with bonded aluminum layers, are topped with goldplated copper finials. The interior wooden parts of the mosque bear a clear Turkish-Islamic influence. The floors are covered with woolen felt to prevent odors in the hot climate of Djibouti.

The Turkish nonprofit’s director, Mehmet Savaş Polat, says they adorned the mosque’s interior and exterior with cream-colored and beige natural stones extracted from Turkey and all the marble used in the construction had traditional Turkish-Islamic motifs.
Polat added that it is the first mosque dedicated to an Ottoman sultan in Africa since the fall of the empire. “Thus, our foundation continues to preserve the legacy of our ancestors on African soil. The Abdülhamid II Mosque and Complex will help strengthen shared religious, historical and cultural ties between the people of Anatolia and Africa. It will be a symbol of unity and peace,” he said.

The TDV, founded in 1975, is active in charity work in 149 countries, along with social and cultural events. It has been behind the construction of more than 100 mosques and educational institutions in 25 countries. Turkey, which has pursued closer relations with African countries under President Erdoğan’s “African opening,” has been boosting bilateral relations with Djibouti, which gained momentum after 2012 when the Djibouti Embassy in Turkey was established; the Turkish Embassy in Djibouti was inaugurated a year later.
Erdoğan visited Djibouti in January 2015, and his Djiboutian counterpart, Ismail Omar Guelleh, visited Turkey in December 2017. To further boost bilateral ties, Turkish Airlines has had direct flights between the two countries since 2012, while the Turkish Cooperation and Coordination Agency (TİKA) inaugurated an office in the country in 2012, carrying out numerous development aid projects. So far, 60 protocols, memorandums of understanding (MoU) and conventions have been signed concerning areas such as energy, health and the economy.