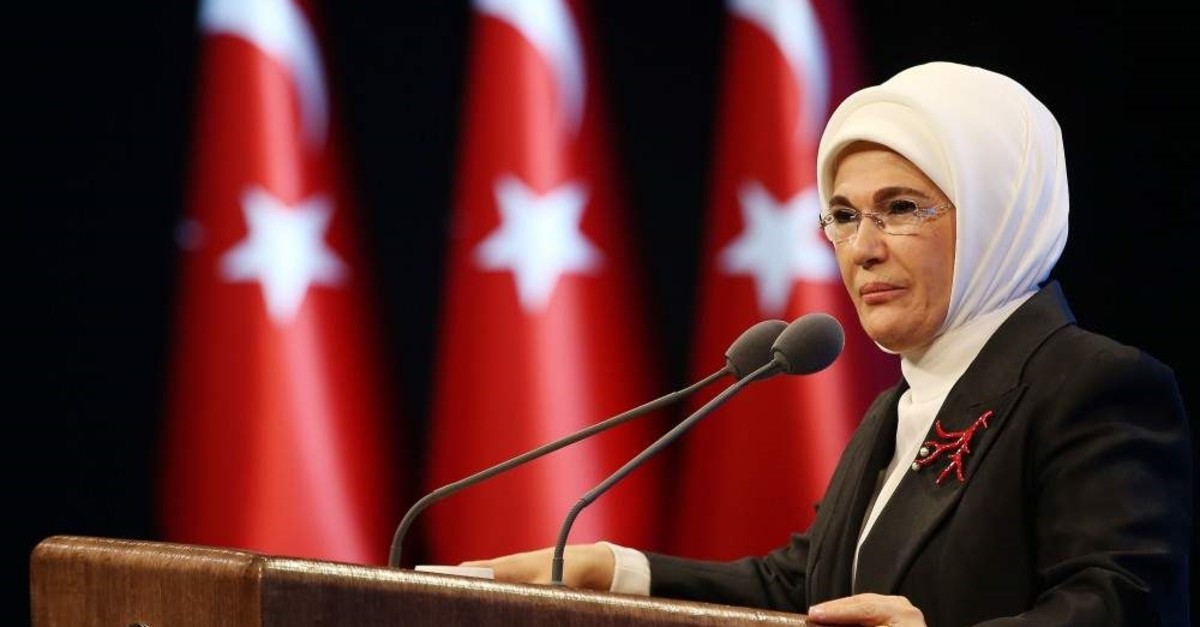 First lady Emine Erdo?an addressed the event at the Presidential Complex, Ankara, Nov. 25, 2019. (AA Photo)
by Daily Sabah Nov 25, 2019 5:17 pm
In line with the International Day For The Elimination of Violence Against Women and Girls, the government on Monday unveiled a comprehensive action plan to fight domestic violence. The plan covers everything from prevention of violence to protection of victims.
Domestic violence or violence against women in a broader sense, has been a thorny issue in Turkey, which has been plagued by so-called “honor killings" for decades. Official figures show there have been at least 299 murders of women this year so far – already up from 280, in 2018. The categorization of the figures refers to both murders by their husbands (usually those in the process of divorce) as well next of kin, boyfriends, etc.
The Ministry of Family, Labor and Social Services rolled out the campaign entitled “Mercan” (or "Coral") at an event at the Congress Center located in the Presidential Complex in the capital, Ankara. Minister Zehra Zümrüt Selçuk said the name drew from the fact that coral acts as a source of life, “just like women, who build lives for humanity.”
Selçuk said a coordinated plan composed of 75 articles had been prepared in order to combat violence targeting women. The ministry set out to fulfill each step over the course of 2020 and 2021. The plan is the joint work of ministries, including Justice, Interior, National Education and Health, along with the Directorate of Religious Affairs. Among the measures, includes the assigning of specialized courts for implementation of Law No. 6284, which came into force in 2012 to give women more legal options and protection against domestic violence. Minister Selçuk said they would also accelerate moves aimed at detecting unreported domestic violence through projects such as Family Social Support Staff (ASDEP), social workers who will be tasked with monitoring domestic violence cases and the provision of immediate services to victims. “We will develop a risk analysis module that will help us to implement more effective measures not only to protect the victims but also to halt the perpetrators. We will conduct anger management programs and will make our Family Consultation services more robust,” she said.
Speaking at the event, first lady Emine Erdoğan said violence, regardless of its target and method, was a malign tumor in societies and everyone should work to wipe it out. Citing a United Nations report, Erdoğan said 137 women were killed by a spouse or next of kin every day around the world. “Unfortunately, there have been tragic cases in our country as well, cases that made us ashamed of our humanity,” Erdoğan said, referring to the brutal murders of women by their spouses. “The murder of even one woman constitutes a treacherous stab in the back of humanity,” she added.
Erdoğan said the violence towards women is something to be tackled with multiple solutions and should be assessed with its economic and psychiatric aspects and more needs to be done, from legal regulations to reinterpretation of cultural norms. “But first and foremost, the concept of personal privacy has it that violence towards women is a family matter... The idea of violence being a private matter paves the way for violence and equates to a violation of human rights. Such violations eliminate privacy,” she said.
She also criticized the mindset of seeing women as “commodity men own.” “Men are not superior to women and no one has a right to commit actions harming the physical and spiritual integrity of an individual,” she said. Erdoğan highlighted that most women’s murders are blamed on “jealousy and honor” by perpetrators, “reasons associated with morals.” “But no one is responsible for someone else’s morals,” she said.
President Recep Tayyip Erdoğan also tweeted a message on the occasion. “Violence toward women is one of the greatest crimes against humanity. We will continue fighting against violence, abuse, harassment, and discrimination targeting women and by God’s will, we will eliminate this shame from our country together,” he tweeted on Monday.
Also on Monday, women’s non-governmental organizations staged rallies across the country to protest the violence against women while landmarks in several cities had orange lighting for the day as part of a United Nations campaign entitled “Orange The World: Generation Equality Stands Against Rape.”
Figures by the Interior Ministry shows 124,521 cases of domestic violence and violence against women in the first ten months of 2019, a rate %19,1 lower than last year. Interior Minister Süleyman Soylu said in a written statement on Monday that authorities ordered protective measures for 70,897 people in the same period in domestic violence cases.
Last Update: Dec 20, 2019 1:55 am
RELATED TOPICS