TİKA reaches out to families affected by Israel's Gaza attacks 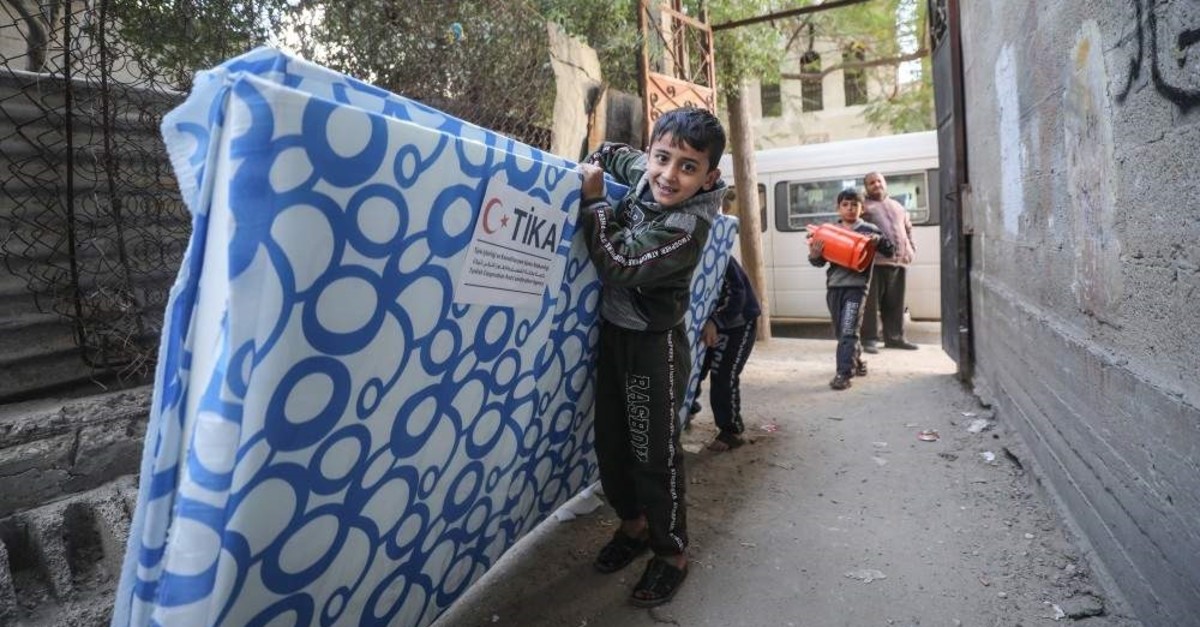 The Turkish Cooperation and Coordination Agency (TİKA) delivered aid to 1,100 Palestinian families affected by Israel's wave of attacks earlier this month, from food to beds

Turkey’s outreach to Gaza under the Israeli blockade continues with renewed humanitarian aid efforts. Turkish Cooperation and Coordination Agency (TİKA) delivered aid to 1,100 families who lost homes or had their possessions damaged in Israel’s raids earlier this month.
The leading development aid agency handed out 500 food packages, 500 pillows, 500 beds, 300 packages of kitchen utensils, 300 gas cylinders for cooking and 300 ovens to families on Thursday.
Among the beneficiaries of the aid were the al-Sawarkas, a family that lost nine members, including five children, in the raids. The family’s oldest surviving member, 76-year-old Silmiyyah al-Sawarka told Anadolu Agency (AA) that they were glad to receive the aid. “We are thankful to Turkey for the aid,” she said. The elderly woman, who lost two sons, their wives and children in the attacks, condemned Israel. “They were sleeping when they fired four rockets on their house. Two families died there. Israel burned my heart and may Allah burn theirs,” she said.
Seventy-year-old Hammad Abu Shabab, whose house was destroyed in an Israeli attack, said they were forced to relocate to a shipping container they now call home. “We are grateful to the Turkish nation and President Recep Tayyip Erdoğan for their support of the people of Palestine,” he said. Muhammad as-Sirfi, another Palestinian who received aid from TİKA, said they have nothing, “no money, not anything.” “I can’t afford even the simplest things for my family. My children could not even have breakfast today. They go to school, but I can’t give them their daily allowance. The economy is very bad in Gaza. We thank President Erdoğan and the Turkish government for helping us on those bad days,” he said.
The Israeli army launched a raid on an Islamic Jihad leader in Gaza on Nov. 12 in the first phase of a string of raids targeting the enclave. Thirty-four Palestinians were killed, and 110 others were injured in the ensuing attacks.
Since 2007, the Gaza Strip has been under a crippling Israeli and Egyptian blockade that has gutted its economy and deprived its roughly 2 million inhabitants of many vital commodities, including food, fuel and medicine. In the long-embargoed enclave, the humanitarian situation has grown worse by the day. The U.N. Relief and Works Agency (UNRWA) earlier stated that there are now some 620,000 Gazans who live in abject poverty, meaning those who cannot cover their basic food needs and who have to survive on $1.60 per day, and nearly 390,000 absolute poor.
Israel's long-standing blockade also creates serious obstacles for Gazans to access a variety of medical supplies. The humanitarian situation in the occupied Palestinian territories has deteriorated further as hospitals struggle to cope with high casualties since protests on the Gaza-Israel border began last year.
The TİKA is at the forefront of Turkish efforts to help Gaza. In the past decade, it carried out about 400 projects for developmental aid. The agency’s Palestine office, opened in 2005, is behind projects for education, health, emergency aid, water and public health, as well as the manufacturing sector, preservation of historical heritage and empowerment of civilian infrastructure.
The agency will soon inaugurate Palestine-Turkey Friendship Hospital in Gaza, the region’s largest and most modern hospital that cost more than $62 million. It also opened six schools as part of a project for one school for each Palestinian city.
Last Update: Dec 20, 2019 2:01 am
RELATED TOPICS