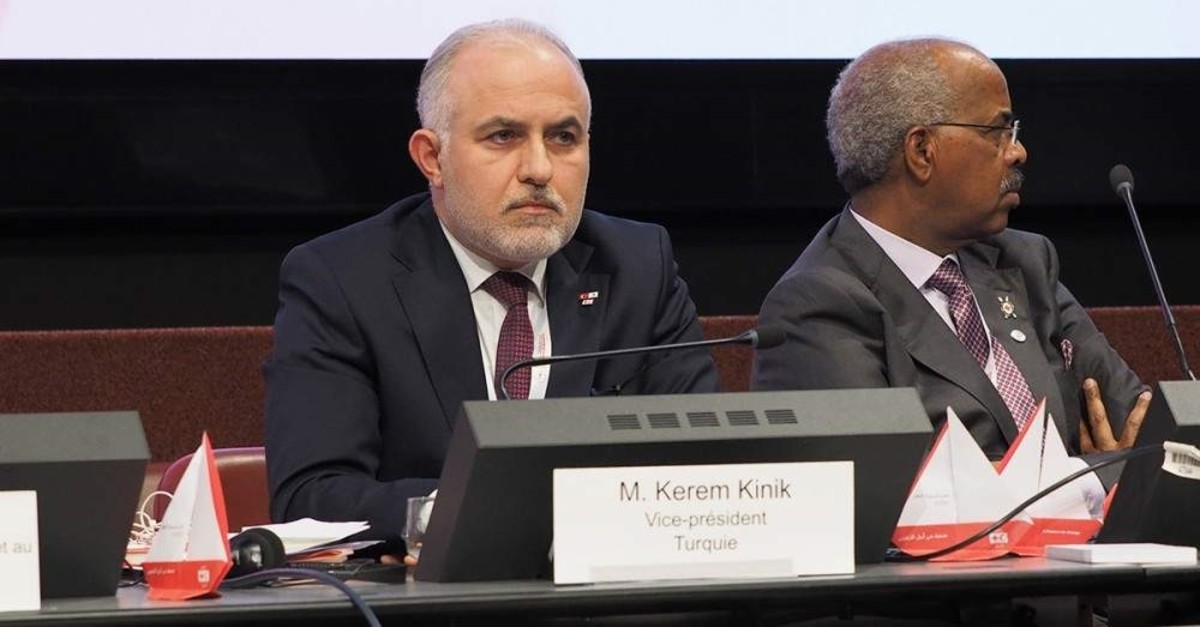 Kerem Ku0131nu0131k, President of the Turkish Red Crescent.
by İbrahim Altay Dec 07, 2019 4:40 pm
The International Federation of Red Cross and Red Crescent Societies (IFRC) marked climate change to be among major humanitarian emergencies confronting humanity in its strategy for the next decade announced at the federation's 22nd general assembly Thursday in Geneva.
Strategy 2030 comes as the product of two years of consultation and research with all 192 IFRC members and outlines how new challenges such as climate change and migration have become major issues for nearly all countries.
“Climate change is an existential threat that is already completely altering the work we do, and the lives of the people we support,” said IFRC President, Francesco Rocca, speaking at the general assembly.
“Tackling climate change will be our major priority over the coming decade. This means strengthening the capacity of each and every National Red Cross and Red Crescent Society so that they can effectively respond in their own contexts, as well as investing heavily in methods to help communities adapt,” he added.
‘Environmental crises and climate change’ are placed as the most important out of five global challenges in Strategy 2030. The other four global challenges are identified as evolving crises and disasters, growing gaps in health and well-being, migration and identity, and values, power and inclusion.
“It is clear that the existing international humanitarian system will have to significantly transform to cope with climate related challenges.. Strategy 2030 is IFRC’s commitment to this transformation,” said Elhadj As Sy, IFRC Secretary General.
The IFRC concluded that the devastating effects of these issues could be prevented by community strengthening, early warning systems, early alert, early actions , innovation and new forms of financing.
Speaking to Daily Sabah, Kerem Kınık, President of the Turkish Red Crescent and Vice President of IFRC, offered more details on the plans of Turkish Red Crescent's role in Strategy 2030 and the organization's growing role as a major humanitarian aid provider.
Kınık said the plan aims to help people anticipate, respond to and quickly recover from various crises, enable people to lead safe, healthy and dignified lives as part of inclusive and peaceful communities.
Climate change has reached a point at which it has started to trigger wars, he said, pointing to the mass migrations occurring across Africa and tensions in the Asia Pacific region.
Kınık said that one of the most pressing issues of Strategy 2030 regarded finding sustainable financing and seeking better financing for aid efforts.
In response, Kınık made a presentation to all 192 Red Cross and Red Crescent associations proposing a model similar to that of the Ottoman "waqf," describing it as an exemplary solution for sustainable financing in humanitarian aid, as waqfs are formed with an income-generating model.
Turkey has a long-standing tradition of waqfs, charitable foundations, that date back to the Ottoman and Seljuq eras.
Unlike other members of IFRS, which receive nearly their entire funds from their
governments, Turkish Red Crescent follows a model similar to the waqf and creates substantial amount of revenues, Kınık said.
In the Ottoman era, waqf establishments acted as bridges between the public and the state. They took care of the people's needs that the state could not. Waqfs were active in every field of life, from culture, to education and religious training, and even accommodation and providing food and water.
The Turkish Red Crescent has its own mineral water brand, real estate, portfolio management company, tent and shelter production facilities, hospitals and other businesses that financially support its aid efforts.
The companies of Turkey’s largest humanitarian organization have a combined revenue target of 1.36 billion Turkish liras ($235 million) for 2020.
The Turkish Red Crescent produces the world’s highest quality disaster tents and the United Nations is one of its clients, Kınık said. In 2019, the Turkish Red Crescent had a 5 billion Turkish lira budget ($865 million), which will be increased to 6.5 billion Turkish liras ($1.12 billion) in 2020. More than half of this budget consists of donations and funds.
Kınık said the organization receives funds from the U.N., EU, U.S., and other international foundations.
While the Turkish Red Crescent has internal audit mechanisms, the organization also hires external audit companies such as Deloitte and PwC, and is also audited by the European Court of Auditors, Kınık said.
Thanks to its financial resources, donations and strong organizational capacity, the Turkish Red Crescent was able to deliver humanitarian aid to more than 28 million people across 50 countries last year.
The types of aid the Turkish Red Crescent provides are extensive from delivering life-saving blood donations to giving financial aid to low-income families.
“In almost all international meetings, Turkey is being recognized as the most generous donor of humanitarian aid in the world, the one sheltering the largest number of refugees. We, as the Turkish Red Crescent, are also supporting this humanitarian stance,” Kınık said.
Last Update: Dec 20, 2019 2:12 am
RELATED TOPICS