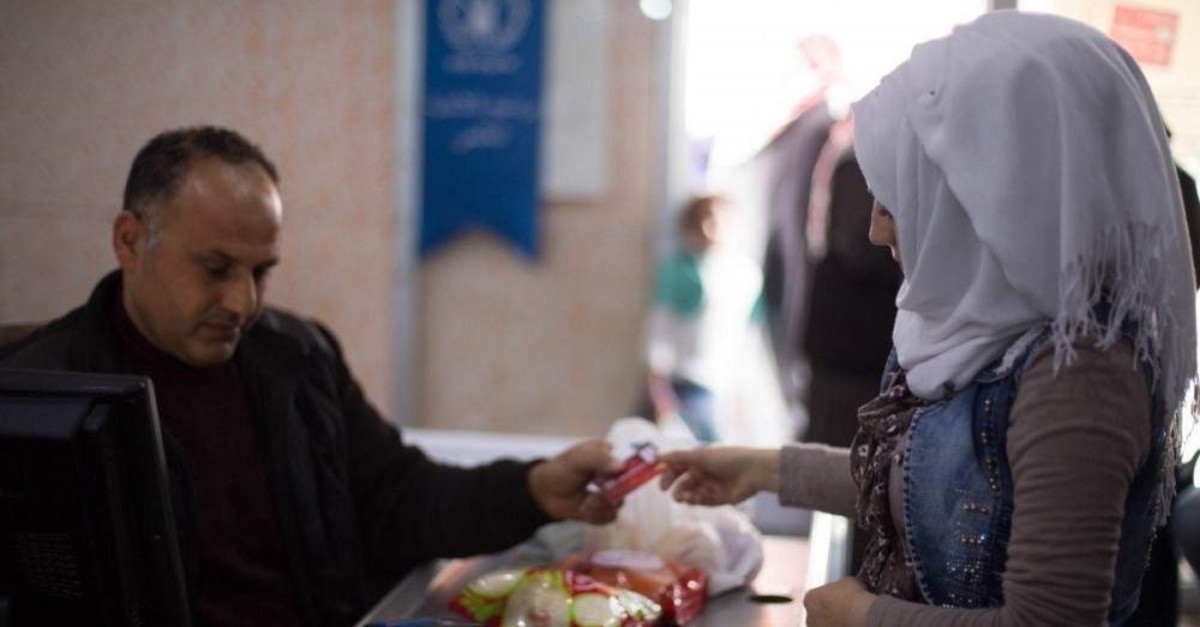 Turkish Red Crescent's debit card, Kızılaykart, for Syrian refugees in Turkey, has been awarded an additional 500 million euros by the EU

Kızılaykart, a debit card bearing the Turkish name of the country’s Red Crescent, has expanded its scope with a new partnership and additional cash flow from the European Union.
Turkish Red Crescent President Dr. Kerem Kınık hailed a new partnership with the International Federation of Red Cross and Red Crescent Societies (IFRC) for 2020-2021 for the card and announced a 500 million euros ($553 million) contract with the EU for the “next stage” of Kızılaykart.
The debit card, designed for Syrian refugees in Turkey, allows those who have fled to Turkey to shop with a pre-paid card topped up monthly with TL 120. It is part of a Social Adaptation Assistance Program for refugees in Turkey that has been home to the largest Syrian refugee community, over 3.6 million people, due to civil war in Syria.
The Turkish Red Crescent held an event in Switzerland’s Geneva on Kızılaykart. Geneva is hosting the 22nd general assembly of IFRC this week. Speaking at the event, Kerem Kınık said Turkey was hosting more than 5 million refugees from 70 nations, mostly Syrians, and international Red Cross and Red Crescent societies supported Turkish Red Crescent’s work for these refugees. “As part of our joint efforts, we support more than 3 million refugees every month, from protection and cash aid to activities to help them earn a livelihood. We strive to keep refugee children at school and provide them health and welfare services,” he said.
He said the Emergency Social Safety Net (ESSN) program that enabled Kızılaykart was the largest humanitarian cash assistance program in the world. “ESSN gives cash to more than 1.7 million recipients to cover their basic needs. We pay around 30 million euros every month,” he noted.
Kızılaykart has been in use since 2016 as part of a program run in cooperation with the World Food Programme (WFP) and financed by the European Union’s Directorate-General for European Civil Protection and Humanitarian Aid Operations (DG ECHO). Kınık says that thanks to efforts by the IFRC and Turkish Red Crescent, the IFRC replaced the WFP as a new partner of the ESSN for the years 2020-2021. “The Social Safety Net is now an entirely ‘Red’ deal,” he said, pointing out that the federation had been awarded a 500 million euro contract for the next step in the program. “This is a great victory and will contribute both to the IFRC budget and scope of its activities while boosting its reputation,” he pointed out.
The IFRC will take over from the WFP as the main body overseeing the program on April 2020. It will serve as coordinator and observer while Turkish Red Crescent will continue overseeing ESSN activities.
The cash assistance covers people living in Turkey under international, temporary protection and fulfilling application criteria. Each applicant is entitled to TL 120 for every month, along with additional payments several times a year. Disabled refugees can be granted more in cash.
Turkey currently hosts some 3.6 million Syrian refugees, more than any other country in the world. Ankara has so far spent $40 billion on the refugees, according to official figures.
The European Union announced in October that it was mobilizing over 600 million euros ($668 million) of additional funding in humanitarian aid under the scope of a program to support refugees living in Turkey for Kızılaykart. Ankara and Brussels signed an agreement in March 2016 to find a solution to the influx of refugees heading to the union. According to the deal, Turkey was promised a total of 6 billion euros in financial aid, which was initially designed to be given to the country in two stages and be used by the Turkish government to finance projects for Syrian refugees. In response to this, Turkey took the responsibility of discouraging irregular migration through the Aegean Sea by taking stricter measures against human traffickers and improving the conditions of Syrians living in Turkey. Although the EU had pledged 6 billion euros to improve the living conditions of Syrian refugees in Turkey, only 2.22 billion euros were disbursed as of this June, according to Turkey. Also, the EU has yet to fulfill other articles such as the visa-free deal for Turkish citizens and updating the customs union. ISTANBUL / DAILY SABAH
Last Update: Dec 20, 2019 2:14 am
RELATED TOPICS