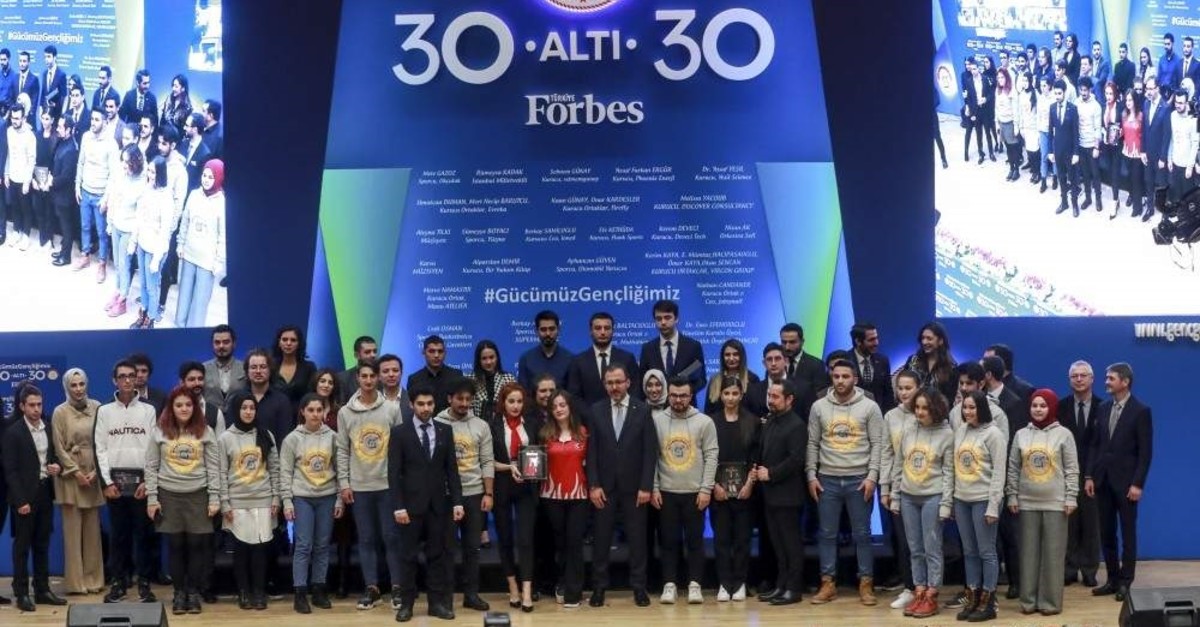 Youth and Sports Minister Mehmet Muharrem Kasapo?lu awarded 30 young people under the ,30 under 30, programme in Ankara on Dec.11, 2019 ( Ahmet ?zgi - Anadolu Agency)
by Daily Sabah Dec 11, 2019 5:50 pm
Thirty people under the age of 30 who have stood out in various sectors including sports, arts, media, entrepreneurship, music, finance and politics, were awarded for their leading roles and creativity on Wednesday in the “30 Under 30” program of the Youth and Sports ministry in cooperation with Forbes magazine.
“Turkey’s greatest driving force in taking concrete steps toward the future is certainly the youth. We always witness the power, potential and richness in every project they achieve. Turkey has one of the world’s youngest populations and the youngest population of Europe. Therefore it is our priority to equip our youth with the necessities of our age and render opportunities open for access,” Youth and Sports Minister Mehmet Muharrem Kasapoğlu said.
Among the successful young prize winners are European champion Paralympic swimmer Sümeyye Boyacı, Cedi Osman of the Cleveland Cavaliers, Turkey's youngest deputy Rümeysa Kadak, musicians, CEOs and founders of companies engaging in sectors ranging from energy to information technologies and fashion.
“These young people will accomplish more great successes. They will be an example and they will represent our country abroad. We are aware of the Turkish Youth; we know that when they are given the opportunity, they make the most out of it,” Yasemin Gebeş, executive board member at Turkuvaz Media said, mentioning that these people were not only chosen for their entrepreneurship but for their influence, the steps they have taken for the future, their leadership skills and their potential to make a difference.
The minister also noted that Turkey ranked in the "very high development" category this year for the first time among the U.N. Development Program’s (UNDP) Human Development Index. The country ranked 59th among 189 countries and territories, the UNDP said in a report released Monday. The country's index value rose 39% from 0.579 in 1990, according to the UNDP report.
Last Update: Dec 20, 2019 2:19 am
RELATED TOPICS