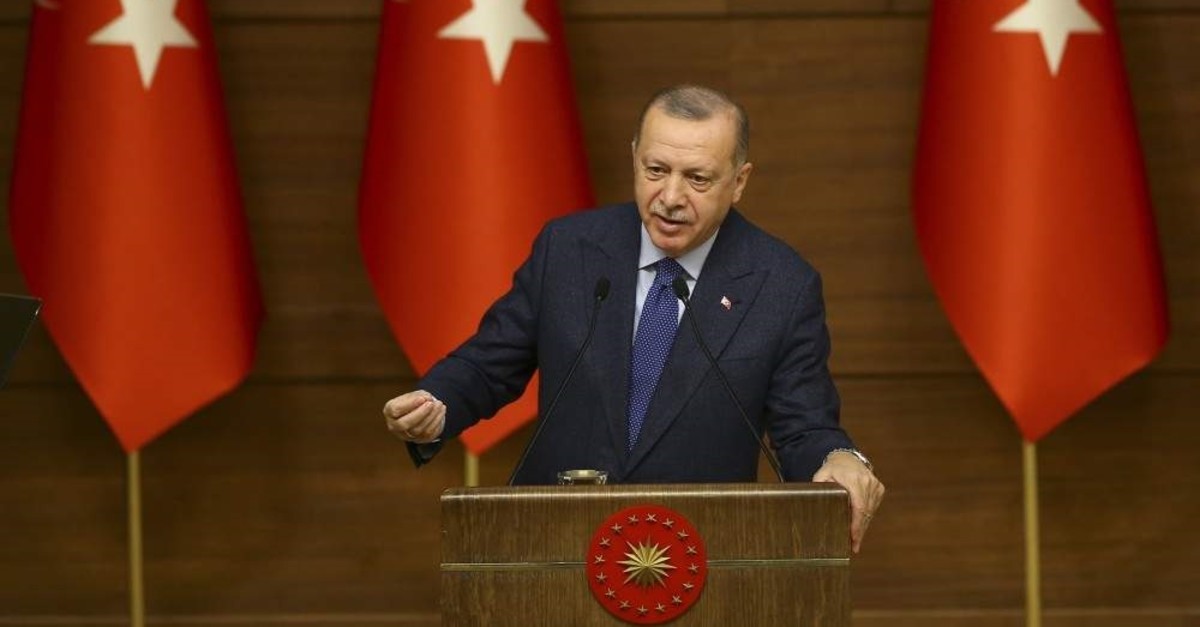 Erdo?an speaks at an event to introduce the project, Ankara, Dec. 12, 2019. (AA Photo)
by Daily Sabah Dec 12, 2019 5:33 pm
Turkey on Thursday unveiled a social housing project to provide homes to 100,000 families. Under the scheme announced at the Presidential Complex in the capital Ankara, low-income families will be able to purchase houses to be built by the government with a low downpayment and long installments for cheaper prices. It is the first stage of the government’s plan to build 100,000 social housing units every year. The Housing Development Administration of Turkey (TOKİ), the public housing body which already builds large housing complexes for impoverished families, will construct the units.
The houses will be built in 81 provinces, and their construction will be completed in about 12 to 18 months. The construction work is set to start in January.
Speaking at the event for the launch of the project, President Recep Tayyip Erdoğan said the houses would be designed “in a way to reflect our traditional neighborhood culture with squares, mosques, schools, markets, recreational areas, green spaces and other features.” The apartment buildings where houses will be located will have five floors at most, reflecting the government’s ambitions for “horizontal architecture.” President Erdoğan has been a critic of tall buildings “spoiling” the skylines of cities and often calls for the construction of buildings with fewer floors.
The houses will be sold to low-income families for a 10% downpayment with monthly installments starting at TL 894. Payment plans can be extended for up to 240 months. The largest apartments in the project will be 100 square meters. The housing project will cost the state about TL 17.3 billion.
Housing projects for low-income families sped up in the past two decades under the ruling Justice and Development Party (AK Party) governments. TOKİ plays a leading role in building houses for low-income families.
Erdoğan outlined the history of “warped” urbanization in Turkey at the event and said they have worked to reverse the trend. “Migration to cities from rural areas gave rise to slums, unhealthy settlements with uncontrolled growth. They expanded because of populist policies turning a blind eye to illegally built dwellings. Certainly, this was a favor for new arrivals to cities but in fact, they were a sign of betrayal to those people, forced to live in places without infrastructure, without any amenities. Policies propelling poverty, deepening income injustice, instability and insecurity turned this into a major problem. We saw this warped urbanization destroying our cities’ structure, culture and social texture and left us to confront social problems like rising crime rates,” he said.
Last Update: Dec 20, 2019 2:20 am
RELATED TOPICS