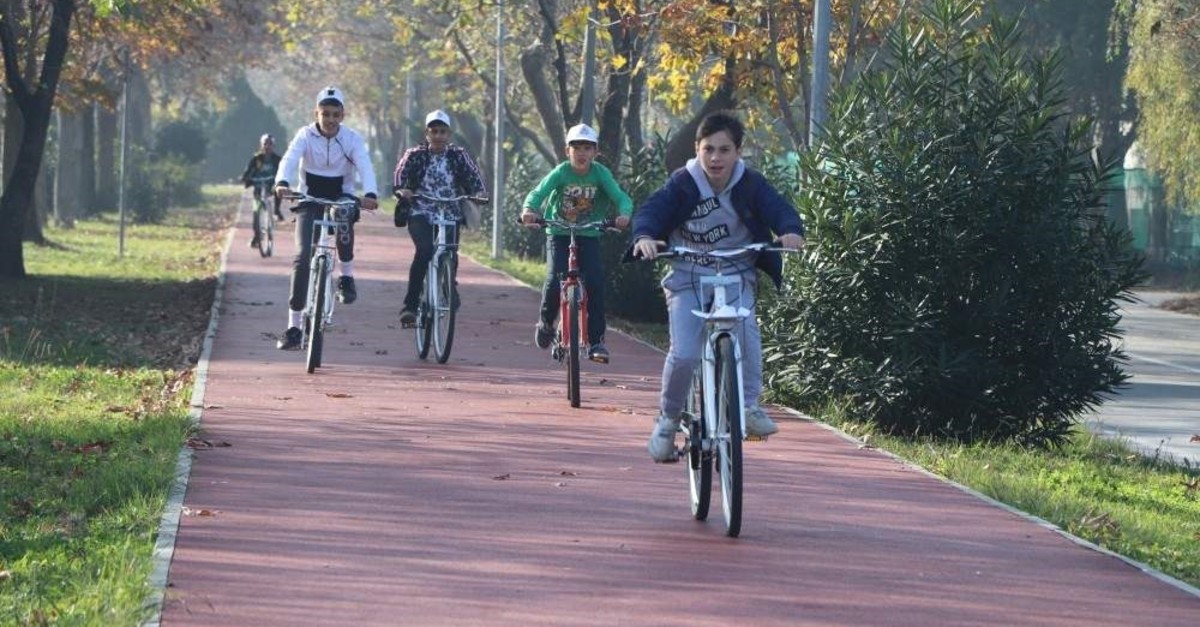 Turkey seeks to ride the wave of the biking trend in the world, to cut emissions and promote a healthy lifestyle. A new regulation by the Ministry of Environment and Urban Planning introduced this week sets a series of steps in motion to expand the existing bicycle lane network and make cities more accessible for cyclists. It will be mandatory for bicycle lanes to be included in new zoning plans under this regulation.
The regulation also aims to promote the cycling sport, with lanes for professional cyclists, as Turkey raised its profile in the sport with its prestigious international event, Tour of Turkey.
Under new plans, bicycle lanes will be planned as a comprehensive network integrated into other means of transportation –like mass transit – and will connect residential areas, sports facilities, busy public spaces and similar areas. Zoning plans will be required to include lanes and parking spaces for bicycles. In places without zoning plans, like rural areas, simpler paths will be built for cyclists. The regulation also defines “cycling highways, bridges and tunnels,” a landmark change for the country where cyclists often have to ride on the side of highways without any bicycle lanes, risking their lives.
Bicycle lanes will be built on the right of roads and they will be double-lane roads if possible. Traffic signs and other safety measures will be installed on the lanes. Lanes will be closed to traffic of other vehicles, except in places like entrances to parking lots. Apart from main roads, lanes will be also be built in places with large open-air spaces, like university campuses.
The regulation also prohibits riding bicycles on places allocated for sidewalks. However, bicycle lanes will be allowed to be built in pedestrianized areas although the lanes will only be open for cyclists at certain hours.
The regulation divides bicycle lanes into three categories. A “shared bicycle lane” will be a part of the road where the maximum speed limit is 50 kilometers. “Bicycle strips” will be one-laned designated areas for cyclists. For pedestrianized areas, “separate bicycle lanes” on a level lower or higher than sidewalks and roads will be built.
Bicycle lanes will also be built in parks and recreational sites, as well as “public gardens,” large green spaces in big cities recently flourished thanks to the government’s initiative to restore greenery to the concrete jungle of cities. Those areas will also have bicycle parking spaces with repair equipment for bicycles and places allocated for riding training.
“Bicycle highways” will be built in places with high potential of cycling, places with feasible geography allowing riding bicycles. Those highways will be closed to other vehicles and pedestrians.
Lanes for cyclists will be mandated to use renewable energy for lighting. Mass transit vehicles will be equipped with apparatus allowing transportation of bicycles and they will be in use especially in places with higher elevation and traffic. Bus drivers will also be trained on how to accommodate cyclists and bicycles in buses. Bicycles will also be allowed into metro and other similar rapid transit systems as well as ferries. Trains and metro cars will be required to include a section for the storage of bicycles for riders.
In 2015, the government adopted a set of bicycle lane regulations to usher in higher standards for bicycle lanes in cities where cyclists have often complained about the paucity of cyclist-friendly routes.
Cycling in Turkey has witnessed a renaissance as the government organized a health campaign to combat sedentary lifestyles and obesity. However, cyclists face several obstacles riding in crowded cities, namely the limited availability of lanes that can save them from riding on congested roads and reckless motorists. To address this problem, a number of metropolitan municipalities recently unveiled plans to build more lanes dedicated to bicycles.
The government also launched a campaign to encourage the country's youth to use bicycles. Tens of thousands of bicycles were delivered to schools across the country for students to use in physical education classes.
The regulation is a welcome change for cyclists complaining of bicycle lanes “closed to traffic” as they are occupied by other vehicles. In Istanbul, Turkey’s most populous city, the illegal use of bicycle lanes by other vehicles remains a major challenge.
Songül Kızılkaya says her 7-year-old son loves riding his bicycle but the lack of a proper lane deters him. “It will be good to have a place dedicated only to cyclists, especially children,” she says. Murat Akarsu, who lives in the city’s Gaziosmanpaşa district, says cyclists in the district have little space to ride as cars are often parked in the lanes. “People disregard traffic rules. No matter how many lanes you have, you still see cars parked on them,” he said.
Yusufcan Karakuş, a high school student and cycling enthusiast, says he is “scared” of riding in the city. “Cars are parked on the lanes and drivers do not care about cyclists in traffic. It is very dangerous to ride,” he says.
Last Update: Dec 20, 2019 2:21 am
RELATED TOPICS