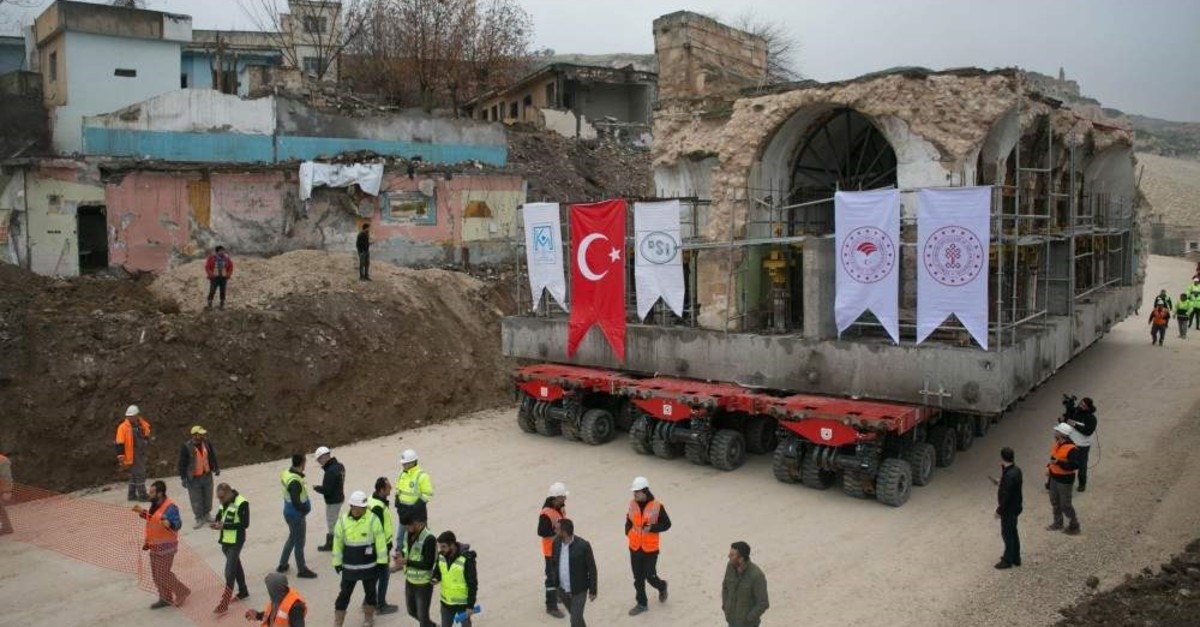 The 609-year-old mosque was transported from the ancient city of Hasankeyf to be protected from flooding due to the construction of a dam nearby. (IHA Photo)
by Daily Sabah with AA Dec 16, 2019 3:47 pm

The relocation of a historic mosque started early Monday in southeastern Turkey's Batman province. The 609-year-old mosque will be the last historic artifact in an ancient city that has been moved for protection from flooding.

The Er-Rızk Mosque is being transported from the ancient city of Hasankeyf — which will be flooded due to construction of the Ilısu dam nearby — to the new Hasankeyf Culture Park above the waterline.

The 1,700-ton building traveled approximately 4 kilometers on a Self-Propelled Modular Transporter (SPMT), to its new location along the Tigris River.

Authorities have been working to save all the important historic sites of Hasankeyf gradually by moving them to the park before the construction of the dam is completed, and a total of six historic structures have already been relocated.

The minaret of the mosque which was constructed upon order of Ayyubids’ ruler Ebu'l Mefahir Süleyman in 1409 was also moved a while ago separately from the mosque.

The main body of the mosque, which was the largest of its kind in Hasankeyf, was dismantled one by one and placed on the platform under the supervision of officials from the State Hydraulic Works (DSİ) and the General Directorate of Cultural Assets and Museums.

The mosque will be reconstructed in the cultural park after the moving process which was estimated to last seven hours.

Artuklu Hamam (bathhouse), Sultan Süleyman Koç Mosque, Imam Abdullah Zawiyah, Zeynel Abidin Mausoleum and Eyyubi Mosque were among the previously relocated structures along with the middle entrance of a castle.