AFAD: A decade in humanitarian action for Turkish agency 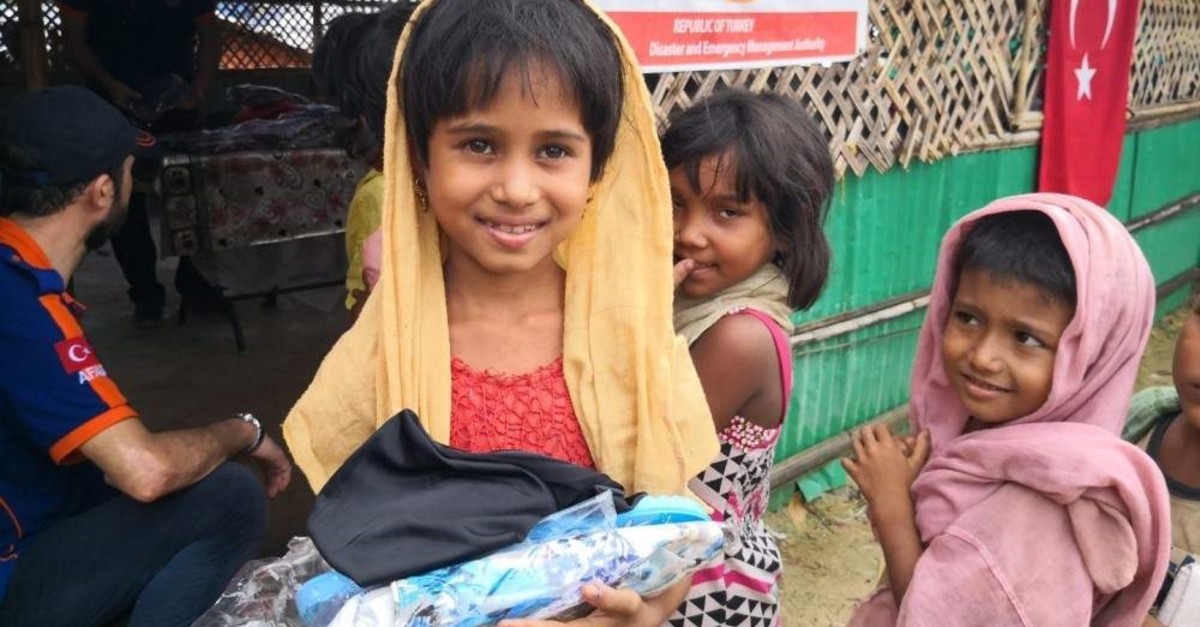 In this undated photo, a Rohingya girl smiles after receiving an aid package from AFAD at a camp for Rohingya Muslims in Bangladesh. (COURTESY OF AFAD)
by Daily Sabah with AA Dec 16, 2019 5:54 pm

The concept of a disaster agency in Turkey is relatively new. The first comprehensive legal amendment to respond to disaster dates back to 1959, some two decades after a major earthquake hit Erzincan, killing thousands of people.
The amendment did not bring out the creation of an agency but along with another regulation in 1988 it more or less defined disaster response, without having one institution singlehandedly responsible for it.
Disaster management and coordination through one agency were seriously considered only after the 1999 earthquake that hit northwestern Turkey. The earthquake killed tens of thousands of people, forcing Turkey to reconsider options for a coordinated response as the state had clearly failed at providing rapid assistance to disaster victims in the aftermath of the earthquake.
AFAD, which was officially founded on Dec. 17, 2009, replaced a series of separate agencies from Civil Defense to the General Directorate for Disaster Works.

In just 10 years, AFAD went from being an ordinary public agency to an institution known for its works in disaster response and conflict zones around the world.
Parallel to Turkey’s growing outreach in the international community, AFAD joined search and rescue work abroad and humanitarian actions around the world. Whether it was delivering food or sharing its expertise in places hit by conflicts, drought or hunger, AFAD was there. Since its foundation, it has delivered humanitarian aid worth TL 4.5 billion in 58 countries.

War-torn Syria is among the countries it has reached out to. AFAD has been active in delivering humanitarian aid to Syria's internally displaced persons but it is mainly known for its refugee camps designed for displaced Syrians who took shelter in Turkey. Until they were handed over to the authority of General-Directorate of Migration of Interior Ministry, AFAD ran 21 refugee camps for Syrian nationals in cities near the border, from Adana to Şanlıurfa. Hundreds of thousands of refugees were sheltered in modern camps and AFAD’s extensive services for refugees drew the praise of the international community.

The organization also delivered aid to Somalia, Palestine, Pakistan and Bangladesh and was a major contributor that made Turkey the most humanitarian aid delivering country in the world.

AFAD's yearly aid delivery reached TL 2.9 billion last year from just TL 296 million in 2010. This year, it delivered aid worth at least TL 21.9 million, of which TL 13.8 million went to Bangladesh, TL 7.4 million to Yemen and smaller sums to Burkina Faso and Iraq.

Humanitarian aid given by AFAD involves everything from food to hygiene kits and medical equipment, along with vehicles used in disaster response. The agency's crews are also assisting in search and rescue missions in disaster zones.

In Turkey, AFAD led a major overhaul in disaster response and helped Turkey to switch risk management from crisis management. Its Integrated Disaster Management System helps to diagnose dangers and risks to prevent future damage from disasters, taking measures to eliminate or minimize damage from disasters and creating an efficient way to intervention and coordination. AFAD works in close coordination both with other government agencies and ministries, as well as Turkish Armed Forces and several non-profit organizations.

Active in 81 provinces, the agency assisted in 2,769 cases across Turkey, including 2,397 emergencies and 282 disasters. Among the cases that AFAD worked on this year was searching for the missing — especially in rough terrain, the rescue of stranded people, transportation accidents and cases involving chemical, biological and nuclear threats, as well as the rescue of trapped animals.
AFAD crews rescued 4,361 people in various incidents and helped in the retrieval of 603 bodies in several emergency and disaster cases.