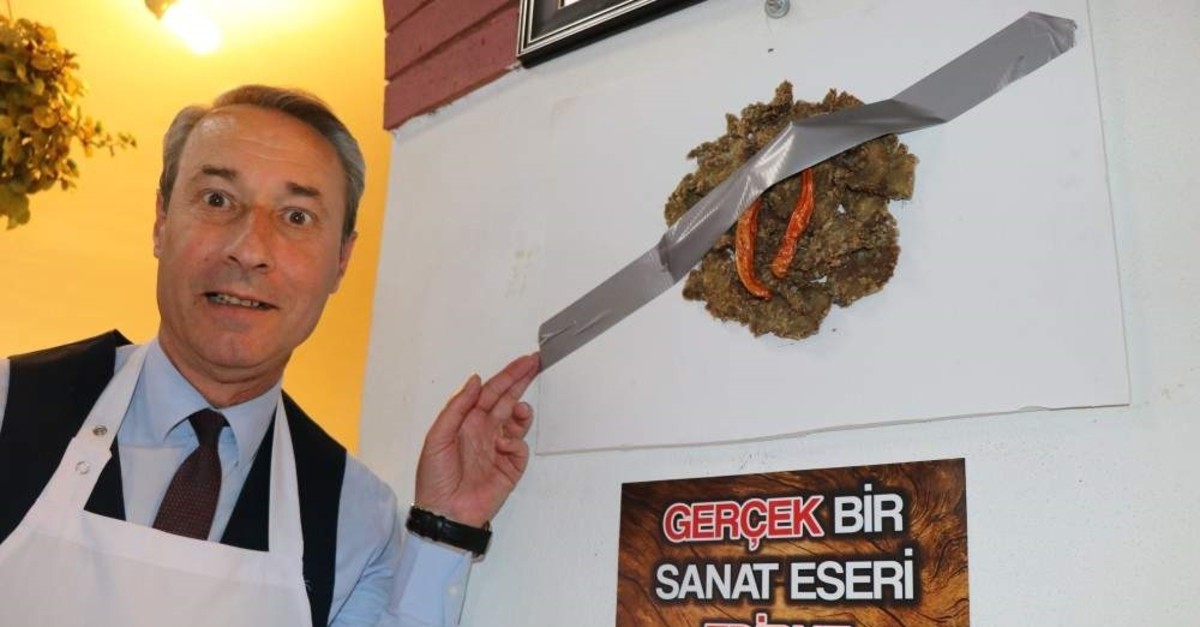 Chef Bahri Dinar points out the fried liver duct-taped to the wall of his restaurant, Edirne, Dec. 17, 2019. (DHA Photo)
by Daily Sabah Dec 17, 2019 7:50 pm
Given we live in an age in which a humble banana can fetch $120,000, chef Bahri Dinar thinks it simply follows that the extensively far-more-exclusive fried liver, a specialty in the Turkish city of Edirne, ought to sell for no less than a mere TL 5,000.
Inspired by Italian artist Maurizio Cattelan’s famous banana artwork that recently went viral, Dinar has taped a fried liver to his restaurant wall. The chef thinks that anyone who could pay that kind of astronomical figure for a banana can certainly afford the pitiful sum of TL 5,000 for his specialty dish.
Fried liver is one of the best-known treats in the Thracian city, and Dinar runs the most famous fried liver restaurant, in addition to his work as head of an association promoting the city and the cuisine.
The liver is on prominent display on the wall of the restaurant and is accompanied by a sign reading “Edirne’s Fried Liver: A Genuine Artwork.” Dinar is asking customers to donate TL 5,000 to a charity looking after stray animals. Anyone arriving with their donation ticket showing as much, he claims, will be awarded a free serving of fried liver along with the one taped on the wall.
“People care about stray animals. Here, we provide them a lot of food. We wanted to raise awareness about this issue. Though people donate food, it is not enough,” he says.
Last week, two Turkish municipalities jumped on the banana bandwagon via Twitter. The Twitter account of the southeastern municipality of Şanlıurfa shared a photo of the city's famous red pepper duct-taped to a wall, with the caption, "Our priceless artwork." The municipality of Trabzon, near the Black Sea, meanwhile, followed suit with a photo of a local favorite, the anchovy, duct-taped to a wall. "This is what we call art. It is better steamed," read the tweet.
Last Update: Dec 20, 2019 2:28 am
RELATED TOPICS