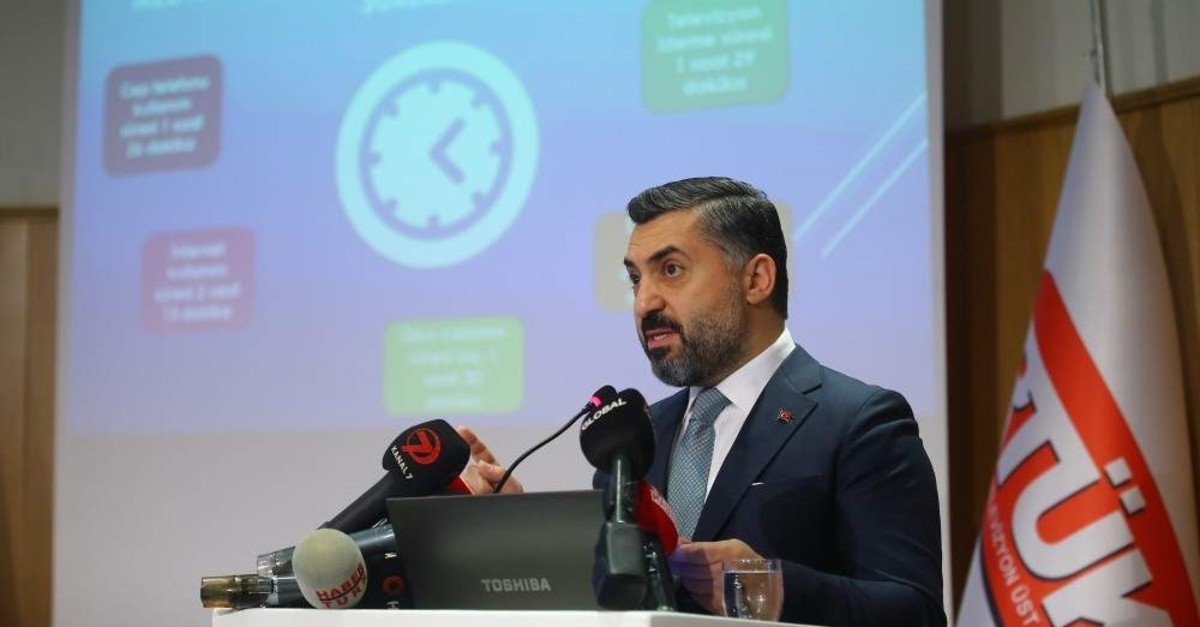 A survey by Turkey's radio and TV watchdog, the Radio and Television Supreme Council (RTÜK) found internet, cellphone use and TV watching habits among middle school students have reached an alarming rate.

RTÜK head Ebubekir Şahin announced the findings of the survey at a press conference in capital Ankara Thursday. He said the results were "a matter of concern."

The survey, titled "Children's Media Use Habits and Cyberbullying," involved interviews with 3,029 middle school students at 99 schools in Turkey's 26 provinces. It shows the students spend an average of two hours and 13 minutes on the internet every day, compared to only one and 30 minutes studying and doing homework.

Though TV still has a significant place in the daily lives of students, the survey shows TV watching rate has slightly dropped but mostly due to new media habits among children. The rate of children watching TV was 98.3% according to a 2015 survey and it dropped to 95.2% in 2018.

Children watch TV series most on TV. It was followed by films and sports events. Half of the children interviewed for the survey said they spend time online almost every day. The 2015 survey showed Internet usage rate was at 90.4% which rose to 97% in 2018. Around 84% of the children see the internet as an inseparable part of their lives.

Şahin says the data shows children were "almost addicted to new media." Though preferences to access new media varies but they overwhelming prefer cellphones, followed by computers, tablets and TVs.

The survey also shows that cyberbullying, from insulting comments to unauthorized sharing of photos and videos and messages with explicit or sexual content, remains a significant problem.

Almost half of the children interviewed for the survey said they are unaccompanied while surfing the internet and the rate of encountering cyberbullying was found to be at 44.2%.

The survey also found that one out of four students do not share it with anyone if they come across an unpleasant experience online. Meanwhile, boys are both more subject to cyberbullying than girls and also make up a majority of those engaged in cyberbullying.

Sema Ülkü, a middle school student who participated in the survey, told Anadolu Agency that she spent about 90 minutes online every day and watched TV "as much as her family allowed." She added that she usually goes online for her studies and at other times, watches videos and listens to music.

Ozan Kalander, another student, says he goes online at the weekends usually but watches TV every evening. He says he does not have a social media account and used the internet mostly to watch videos.