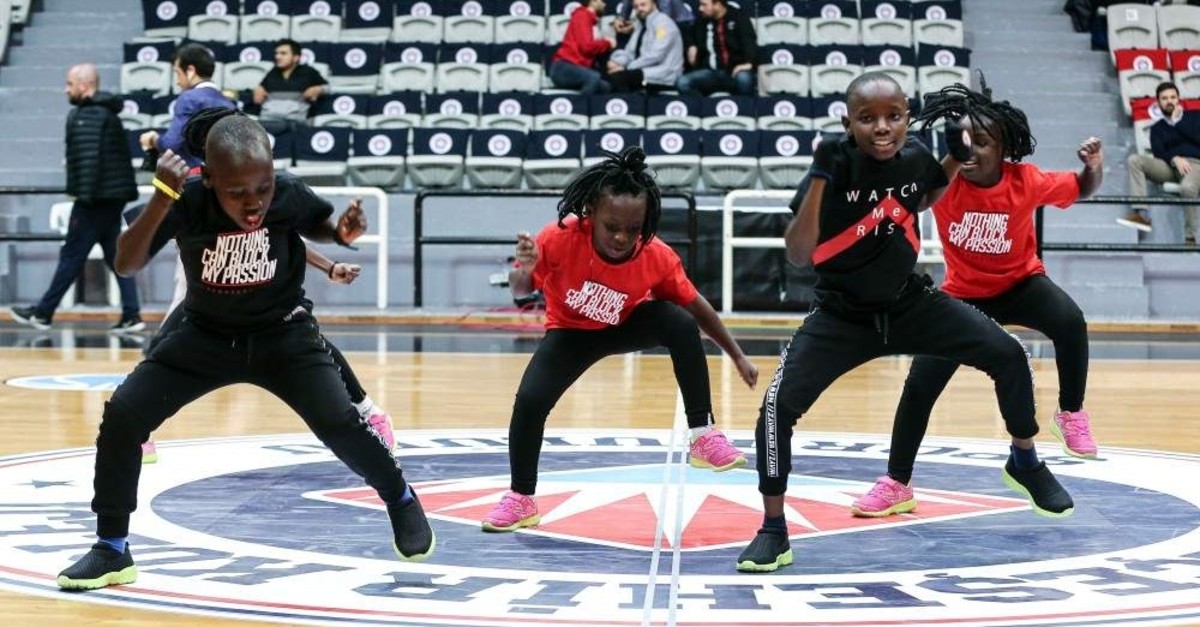 A dance troupe of orphan children from Uganda has been on a tour of Istanbul, performing at local events and warming the hearts of the city's residents

An African dance group composed of orphaned children from Uganda are warming hearts and souls in Istanbul with their spectacular dance numbers and endearing kindness.

The talented sextet of Uganda-based children's group Masaka Kids Africana, named after the Masaka town in the south of the country, arrived in Istanbul on Dec. 14 for a one-week trip, through the support of a number of generous sponsors in the city.

Masaka Kids Africana is composed of children who have lost one or both parents due to "the devastation of war, famine, and disease." Their goal is to empower children by mobilizing communities and supporting them in education and with their talents.

In order to help them realize this mission, Afyon – who visited the group during a visit to Uganda in June after watching a video of them – thought of ways to bring them to the city.

"When I arrived in Turkey, I found great sponsors," Afyon told Anadolu Agency (AA) at the lobby of a hotel where the children were staying during their visit.

Afyon said he had spent "the best three days" of his life during his visit to the kids' town. "We danced all the time," he said, recalling the experience. "Frankly, it moved me so much."

Twenty-four kids from Masaka Kids Africana are living in a three-room house in their town that belongs to the 29-year-old electrician Hassan Suuna.

Living with 24 kids as well as his wife and his 4-year-old son in the same house, Suuna, who accompanied the group on their Istanbul tour, said: "We have many kids. There is no school, there are no parents, no service. So, I am happy helping them."

Despite all of the challenges, the joy and energy of the kids continue to inspire, Afyon said.

"They suffer the same problems that many Africans suffer but are always happy as they dance," he said.

During their Istanbul stay, the kids danced at many events including a match of the Turkish football club Beşiktaş, a basketball match and on several TV shows. They had a great time at an entertainment center in the city.

Having been the first time they left their country, Istanbul is like a "dream" for them, Afyon said.

"Istanbul is so good, there are beautiful houses and the people of Istanbul have a lot of love," 7-year-old group member Namubiru Nabirah told AA.

Another child, Nabikindu Mariam, 10, also voiced her happiness to be in the city. "In my country, there are needy people and they want support. But Istanbul is so good," Mariam said.

Pointing to the hotel where the group stayed, she said: "Our house is not so good, (not) like this one. We need many things."

The Masaka Kids Africana team is very grateful for the chance to come to Turkey.

Sserwanga Antony, 33, a dance trainer of the group, said: "We (are) very very happy to be in Istanbul, because this has been the first time that we flew to (another) country."

"We are very very grateful," he added.

"I thank manager Osman (Afyon) for bringing us to Turkey. I thank (the people of) Istanbul and Turkey for everything that they did," said Ssegirinya Qraibah, an 11-year-old member of the kids' group.

Repeating the group's need for support, Kyambadde Trevor, 11, said: "Keep supporting us. Thank you for loving us."

Each and every child in Masaka Kids Africana dreams of having a bright future and studying through the support of sponsors as well as Hassan, who houses them.

Trevor and Nakyole Jackline, 10, want to become doctors to heal people in their villages. Kigundu Emmanuel, 7, said he wants to be an ambassador, while Nabirah's goal is to be a teacher to help uneducated children.

Qraibah, who wants to be a lawyer to combat crimes in his country, called on parents to encourage the talents of their children.

"If you see that your child has talent, support their talents. Maybe his talent will take him to (a place) where he wants (to be) in the future," he said.

Reciting the group's motto, "Dance, Rise and Shine," Antony stressed that these children have great talent and are capable of realizing their dreams if they received support, despite challenges in their country.

Those who want to help the children of Masaka Kids Africana can provide donations on their website, www.masakakidsafricana.com.