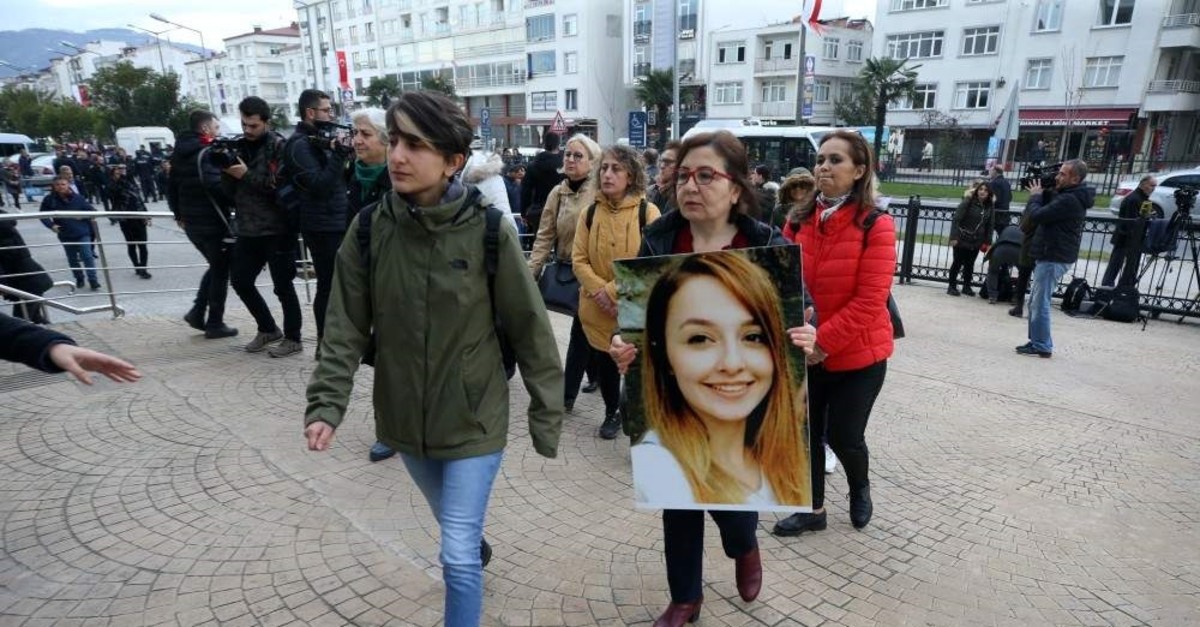 The trial for the murder of Ceren Özdemir, a case that renewed public outrage on violence against women, opened in the northern city of Ordu on Monday.

The murder suspect Özgür Arduç, who confessed to the killing of the 20-year-old, claimed he was insane and asked the court he wanted "treatment."

Özdemir, a university student, was stabbed to death just as she was entering her home in Ordu's Altınordu district on Dec. 3. The murder, latest in a string of domestic violence, murders and crimes against women sparked fury. It also led to a debate on how Arduç, who has a history of violence, was transferred to an "open" prison. Arduç had fled the minimum security prison a day before the murder. He reportedly told the police he intended to "kill more people" before he was captured.

Women's rights activists and an army of media crews were present at the courthouse for the first hearing as Arduç testified via videolink from a prison in eastern Turkey's Van where he is being held. After his capture – during which he stabbed police officers trying to restrain him – Arduç was transferred to the Van prison for safety reasons.

The defendant faces aggravated life imprisonment for "deliberate killing with monstrous feeling," a crime in the Turkish penal code reserved for brutal murders.

Arduç blamed his past for the murder. He claimed he was raped twice and started harboring "hatred for everyone." "I did what I did because I hated people. I threw cats and dogs in front of moving trains. I stabbed Dinçer Akçevre in 2005 for no reason and wanted to kill him," he said, referring to his attack targeting a teenager that ended with the latter's injury and landed Arduç in jail.

He said he wanted to kill "anyone he came across" the day he stabbed Özdemir and actually targeted another person but did not get the opportunity to kill him. He claimed he was mentally unstable and suffered from a "split personality."

"I have a desire to kill. I don't regret it. If you let me go, I will commit crimes again. I want you to get me treated [for my mental problems]," he told the court.

Addressing the court, the victim's father Yılmaz Özdemir said the defendant was "sane" and should be punished with the "heaviest sentence."

A veterinarian who testified as a witness in the hearing said Arduç visited his clinic before the murder and wanted ether but he did not give it to him as he was acting suspiciously. Another witness, who runs a gun store, said Arduç came to his shop and browsed harpoons. Arduç confirmed their accounts and said he wanted to obtain ether to kill animals and the harpoon to kill people. The hearing was adjourned until January after statements from the defendant and witnesses.

Domestic violence and the murder of women by husbands, partners and relatives has long been a thorn in Turkey's side. Thanks to broader media coverage in recent years, the issue is now more visible than ever.

Figures by the Interior Ministry show 124,521 cases of domestic and other violence against women in the first 10 months of 2019, 19.1% lower than the previous year. According to the figures, at least 299 women have been murdered this year, up from 280 in 2018.