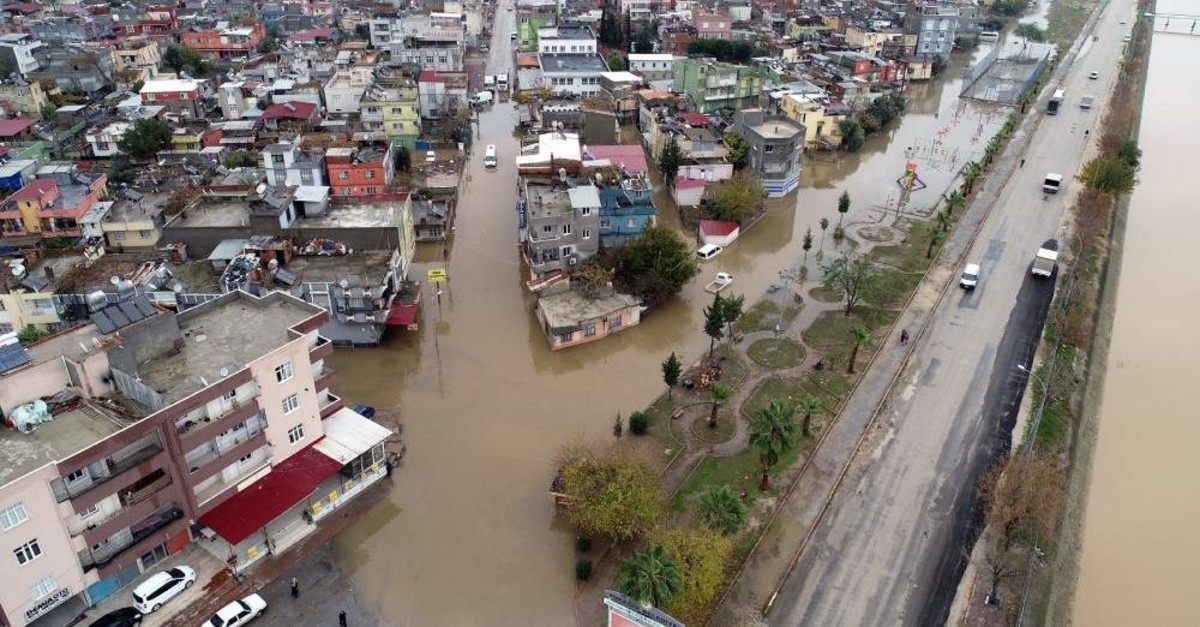 Floodwaters inundated entire neighborhoods in Adana. (DHA Photo)
by Daily Sabah Dec 26, 2019 2:33 pm
Adana has been inundated by heavy rains since Monday which resumed Thursday after a brief break. Flash floods have severely affected this southern Turkish province, which is known for its extremely hot climate.

Government officials visited the city Thursday and vowed to build new houses in the neighborhoods most affected by the floods. Minister of Environment and Urban Planning Murat Kurum told reporters as he visited the flooded neighborhoods that one building was collapsed and the floods damaged 123,151 decares of agricultural lands. He said further damage will be evaluated once the floodwaters are drained and cash assistance was underway for people whose houses and businesses were inundated with water.

Kurum, who visited four neighborhoods affected most by the floods in Adana's Yüreğir district, said the places had infrastructure-related problems and were in need of "urban transformation," referring to a nationwide project to rebuild decrepit inhabited areas with new, sturdy houses to replace the old ones. "We will build 2,000 housing units here for residents," he said. The minister said municipalities of the places the floods hit hardest will be funded for recovery.

Figures show Adana had the most precipitation since 1963 during this week's heavy rainfall – 147 kilograms per square meters. No casualties were reported and one young boy was saved from drifting away by passersby in a dramatic rescue that made the headlines. However, floods were devastating for agricultural lands.

Irrigation canals that overflowed their banks damaged the crops in the province. Adana last saw rainfall this severe in September 2015, when rainfall of 129 kilograms per square meters was recorded.

The rain and flooding led to the closure of schools for one day on Thursday in central Adana, while a building whose walls were cracked by the pressure of floodwaters was evacuated. Officials said four people stranded in a field were evacuated with a military helicopter on Thursday.
RELATED TOPICS