Turkish philanthropy goes beyond borders with state and charity assistance 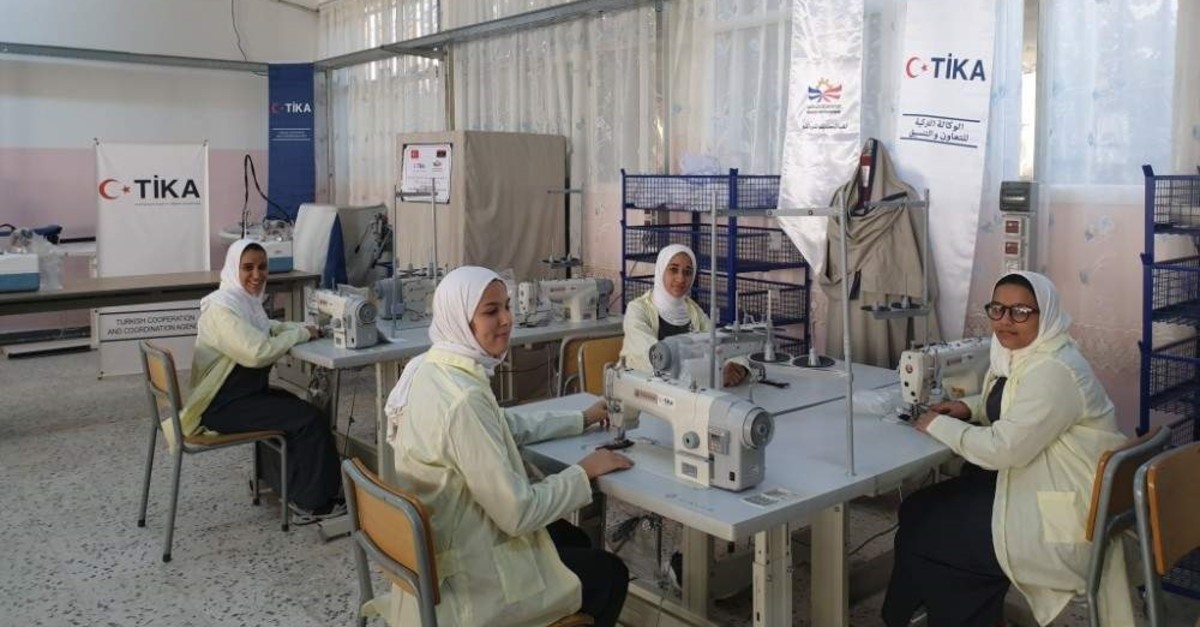 A vocational school furnished with equipment by T?KA in Libya's Tripoli (COURTESY OF T?KA)
by Daily Sabah Jan 01, 2020 10:19 am

Turkey's humanitarian outreach to communities in need around the world is shown in the efforts its charities and state agencies have led in boosting humanitarian assistance over the course of 2019. The country now leads in humanitarian action as one of the most benevolent nations in the world

In a world mired with disasters, natural and man-made, and with the protracted continuation of ongoing conflicts, Turkey nonetheless strove through 2019 making its mark on humanitarian efforts.

State-run agencies and charities led the efforts, either by reaching out to desperate Syrians displaced by civil war or to victims of earthquakes and floods around the world. From the Turkish Red Crescent to Disaster and Emergency Management Authority (AFAD), Turkey has been at the forefront of offering direct assistance to those in need.

The country has been juggling these responsibilities while succeeding in achieving its aspirations for economic growth, aiming to enter the league of developed countries having recovered from years of economic mismanagement. Under the Justice and Development Party's (AK Party) tenure, humanitarian assistance efforts have gained momentum and the country's aid agencies have risen to prominence in offering assistance in disasters and in order to assist refugees. The country's efforts have made it the most logical candidate to host the World Humanitarian Summit, a first-of-a-kind summit arranged under the auspices of the U.N. to coordinate humanitarian efforts.

The state-run Turkish Cooperation and Coordination Agency (TİKA) leads Turkey's global outreach in humanitarian aid. TİKA oversees projects all over the world, from the Middle East to Latin America. Active in five continents with 62 offices, the agency implements about 2,000 projects every year and reached out to 170 countries in 2019 with its projects.

Since being placed under the supervision of the Culture and Tourism Ministry in 2018, the agency has carried out more than 1,500 projects, including the furnishing and renovation of more than 70 hospitals and clinics around the world. It has also been involved in the refurbishment and restoration of more than 200 educational facilities and reached out to more than 10,000 people around the world for education. The group also carries out humanitarian aid delivery and has launched a wide variety of projects, such as vocational training for those from disadvantaged communities and the restoration of sites of cultural and historical value, particularly those outside Turkey which were founded during the Ottoman era. Some 20 Ottoman-era buildings are currently being restored by the agency.

TİKA provided aid to more than 400,000 people in 75 countries during the Muslim holy month of Ramadan, a time when charities step up their activities. Some of the larger-scale projects the agency has implemented include the construction of a girls' dormitory at a university in Palestine and a hospital in Kyrgyzstan.

The organization's primary goal is to create sustainable projects for those who rely on foreign aid for sustenance. TİKA particularly reaches out to women, seeking to empower them in terms of vocational skills and support, from Central Asia to Africa, the Balkans, South America and beyond. In Mexico, for instance, the agency has launched a pizzeria and bakery shop in Iztapalapa to help women from low-income households find employment. Elsewhere, it has furnished the Turkmen Women's Union in Mosul, Iraq, with sewing machines, office equipment and other materials. In Bosnia-Herzegovina, the aid agency has projects to reduce unemployment, one of which includes the founding of the Cooperation of Women Entrepreneurs. The agency most recently donated materials for a sewing workshop to a women's collective in the city of Visoko. The workshop is now staffed by 20 women. Meanwhile, the agency also helped women in Kyrgyzstan find employment opportunities by offering vocational training courses on entrepreneurship, computer literacy and sewing, supporting women-owned businesses. A mobile workshop training women to sew has improved the lives of 110 women, more than half of whom have since found promising employment. TİKA also funded female entrepreneurs starting their own businesses in textiles and agriculture. Further east, meanwhile, the agency has reached out to 1,000 ethnic Rohingya Muslim women from Myanmar, delivering kitchen utensils and clothes.

RISE OF THE TURKISH RED CRESCENT

The Turkish Red Crescent also raised its profile in the international community with an increased presence in humanitarian aid efforts. The charity is involved in aid efforts as diverse as the setting up of refugee camps to the delivery of food parcels to conflict zones and disaster-hit regions across the globe.

Founded 150 years ago primarily to help wounded soldiers, Red Crescent has since evolved into an international humanitarian organization, in 2019 delivering aid to some 22.3 million people. In 2020, it aims to reach 25 million.

The organization is currently coordinating responses to the areas hit by conflict, poverty and natural disasters, from Yemen to Syria. Active anywhere in the world where humanitarian needs arise, the Red Crescent maintains permanent offices in the Balkans, Cyprus, Iraq, Palestine, South Sudan, Yemen, Somalia, Afghanistan, Pakistan and Bangladesh.

The Red Crescent maintains a ubiquitous presence in every disaster zone it enters, providing tents and food parcels bearing its distinct, namesake crescent logo. Its most recent disaster efforts came during this year's earthquake in Albania. Nevertheless, it is nowadays more known as a lifeline for millions of people from Turkey's southern neighbor Syria. The charity has been active both in Syria and Turkey, assisting displaced people, setting up camps, mobile kitchens and clinics for displaced Syrians inside and outside Turkey and delivering truckloads of humanitarian aid. For Syrian refugees in Turkey, the group is known for supplying the Kızılaykart, a debit card bearing its Turkish name, which allows those who have fled to Turkey to shop with a pre-paid card filled monthly with TL 120.

The card is part of a Social Adaptation Assistance Program for refugees in Turkey, home to the largest Syrian refugee community totaling 3.6 million people. Under a new partnership forged in 2019 with the International Federation of Red Cross and Red Crescent Societies (IFRC), the Kızılaykart program will receive an additional 500 million euros cash from the European Union in 2020 and 2021.

Kızılaykart, one of the largest humanitarian cash assistance programs in the world, gives cash to more than 1.7 million recipients for their basic needs and pays around 30 million euros every month to recipients. It has been in use since 2016 as part of a program run in cooperation with the World Food Programme (WFP) and financed by the European Union's Directorate-General for European Civil Protection and Humanitarian Aid Operations (DG ECHO).

Like the Red Crescent and TİKA, the state-run Disaster and Emergency Management Authority (AFAD) has transformed from an ordinary public agency to an institution famed for its works in disaster response and conflict zones around the world.

AFAD, which marked its 10th anniversary in 2019, has assisted search and rescue operations and humanitarian interventions around the world, whether delivering food or sharing its expertise in places hit by conflict, drought or hunger. Since its foundation, it has delivered humanitarian aid worth TL 4.5 billion to 58 countries.

War-torn Syria is among the countries to benefit, along with Somalia, Palestine, Pakistan and Bangladesh, where it has been a major contributor, showcasing Turkey's reputation as the most humanitarian aid delivering country in the world.

Humanitarian aid given by AFAD involves everything from food to hygiene kits and medical equipment, along with vehicles used in disaster response. The agency's crews are also assisting in search and rescue missions in disaster zones.
Last Update: Jan 01, 2020 1:06 pm
RELATED TOPICS