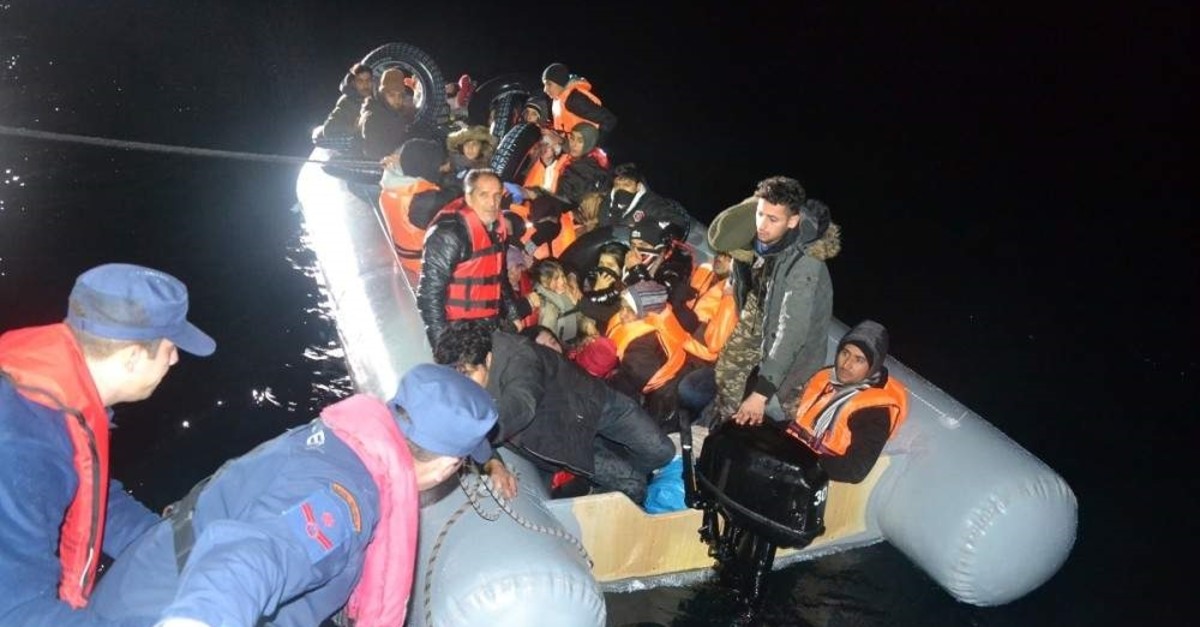 The Turkish Coast Guard stopped over 60,000 illegal migrants in 2019 en route to Europe via Turkish seas, the highest figure since 2015, while the number of intercepted migrants in the past five years reached nearly 238,000

Turkey's Coast Guard Command stopped 60,802 illegal migrants trying to travel to Europe via Turkey's coastline in 2019. This is the highest number since 2015 when Turkish shores saw an unprecedented influx of migrants, especially from Syria, trying to reach nearby Greek islands.

Overall, the Coast Guard intercepted nearly 238,000 illegal migrants trying to cross the seas to Europe in the past five years, according to data compiled by Anadolu Agency (AA). The number of migrants seeking a way into Europe through the Aegean, Mediterranean and Black seas have surpassed the combined populations of 12 Turkish provinces. The record-high number is the direct result of the efforts of the Coast Guard.

Turkey has been a key transit point for illegal migrants looking to cross into Europe to start new lives, especially those fleeing war and persecution. In the past five years, 654 illegal migrants lost their lives either due to drowning or hypothermia. Migrant deaths were highest in 2015. A total of 279 people died that year while it dropped to 192 in 2016 and 56 in 2017 before escalating to 93 in 2018. In 2019, 34 illegal migrants died at sea. Turkish security forces also apprehended 646 people accused of human smuggling in the past five years.

The 2015 flow of migrants sowed bitter divisions among EU states, strained social and security services and fueled support for populist, anti-immigration, eurosceptic and far-right parties. Turkey and the European Union signed an agreement in 2016 aimed at reducing the number of illegal migrants on the dangerous Aegean Sea route. The deal stipulates that Greece is to send migrants held on its Aegean islands back to Turkey. In return, Turkey is to send Syrian migrants it hosts to various European Union countries. The deal also saw an escalated crackdown on human smugglers and increased sea patrols to prevent immigrants from attempting to cross. For a while, it helped reduce the number, but many migrants still risk the dangerous crossing.

The Greek islands near Turkey's Aegean shores are favorite destinations of migrants heading to Europe. However, journeys aboard unsafe, overcrowded boats sometimes steered by inexperienced migrants often turn out deadly. Yet, some desperate migrants still take the route even in winter, when a safe journey through the Aegean is nearly impossible aboard overcrowded, unsafe dinghies. Figures show the Coast Guard Command stopped 37,130 people in 2016, while it dropped to 21,937 in 2017 and rose to 26,678 in 2018. Every year, hundreds of thousands of migrants flee civil conflict or economic hardship in their home countries with the hope of reaching Europe. Some migrants are able to make the dangerous journey over land or sea with the assistance of smugglers who often abandon them, especially during sea journeys, after receiving thousands of dollars from each migrant. Others are stopped by Turkish security forces before crossing the border into Europe.

Illegal migration attempts peaked in August, September and October 2019. In September, the Coast Guard stopped 12,068 people. while this number was 11,908 in October and 8,245 in August. Another 47,179 illegal migrants were stopped before they boarded boats to Greece, thanks to efforts by police and gendarme.

On the first day of 2020, gendarme forces stopped 181 illegal migrants and detained one human smuggler in five districts of İzmir, the western Turkish province which is among popular destinations for illegal migrants for its proximity to Greek islands. Migrants were heading to the coast when they were stopped. Officials announced their nationalities as Afghans, Somalis, Syrians, Palestinians, Senegalese and one Malian citizen.