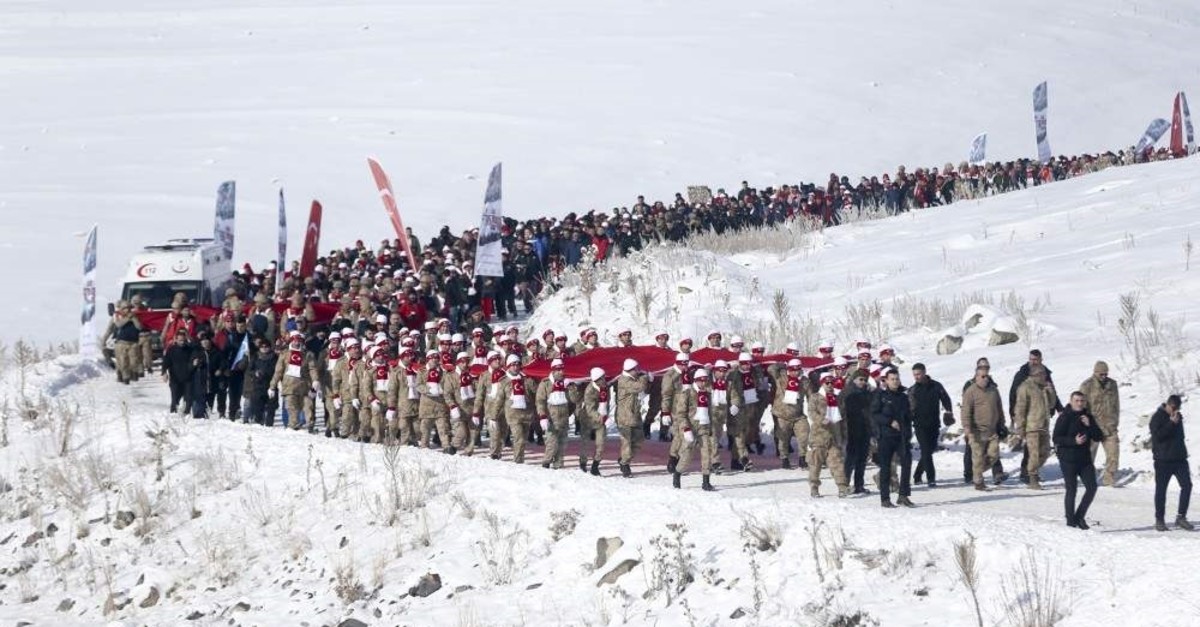 Thousands re-enacted the doomed World War I campaign of Sarıkamış in eastern Turkey in a march Sunday, on its 105th anniversary, while events were held across the country to remember the soldiers who died in the bitter cold

The 105th anniversary of Sarıkamış, a World War I campaign that resulted in a calamity for Ottoman troops, was commemorated across the country on Sunday. The main event culminated in some 20,000 members of the public, as well as government ministers, re-enacting the march forces took near the titular eastern town, waving flags in honor of the tens of thousands of soldiers who lost their lives during the campaign, most succumbing to freezing temperatures and disease.

The commemorative march was arranged to take place through the Allahüekber mountain range under the banner "The Youth Follow the Footsteps of Martyrs." The event drew a large number of young people from across the country and was joined by Youth and Sports Minister Mehmet Muharrem Kasapoğlu and Minister of Agriculture and Forestry Bekir Pakdemirli, who marched alongside the crowd in sub-zero temperatures.

Large-scale remembrance ceremonies have been held in Sarıkamış every year since 2003, but previous years have seen the event confined only to a small group of climbers and activists.

However, this year saw buses of marchers arrive at the town before embarking on the 2-kilometer march to the summit of Kızılçubuk Mountain. After a recitation of the Qur'an, a group waving Turkish flags chanted "God is great" before marching on 4.5 kilometers more to a cemetery filled with the graves of the fallen soldiers. Here, prayers were held and wreaths laid at a monument dedicated to the founder of the Republic of Turkey and hero of the war, Mustafa Kemal Atatürk. An army official also offered the crowd gathered a military account of the Sarıkamış Campaign.

The Sarıkamış offensive was launched in order to repel the advance of Russian forces upon the empire's eastern borders. It was the first World War I military operation undertaken by the Ottomans. The offensive, which began late in the dead of winter in December 1914, quickly succumbed to adverse weather conditions, with scores of troops lost in blizzards. Only a few units reached Sarıkamış, which was under Russian occupation at the time, having already suffered tragic losses. Records from the Turkish Armed Forces show some 60,000 soldiers died from cold, hunger and hypothermia because uniforms had not been adapted to suit harsh weather conditions. Despite the Ottoman defeat, the Russian command was alarmed enough to call for help from its allies, who subsequently initiated the famous Gallipoli campaign from which Ottoman forces emerged victorious. The Gallipoli campaign paved the way for the Turkish War of Independence under the command of Mustafa Kemal Pasha, the commander at the Battle of Gallipoli who later went on to found the Republic of Turkey.

The Sarıkamış episode of the crumbling Ottoman Empire is etched in the memory of the Turkish public today as one of the last patriotic sagas of the early 20th century of Turkey, apart from the Gallipoli campaign. It is highlighted as a mark of the resolve the Turkish army had against all odds and without defying orders.

Images from the Russian archives reveal that although Ottoman troops made some progress on the front, its forces struggled greatly. As foreign and Turkish soldiers who survived later recalled, conditions were so severe that it was almost impossible to bury the mounting numbers of dead due to the soil being frozen. Adding further to the misery, lighting fires was strictly forbidden so as not to reveal the army's position. Moreover, those who managed to stay alive mostly did so by placing flammable mushrooms covered with felt in their pocket warmers and then placing the warmers under their arms and legs. To make matters worse, the units were cut off from much-needed supplies, as horse carts and gun carriages struggled to move through the storms. A total of 5,000 Ottoman soldiers went missing or were taken prisoner by the Russians over the course of the event.

Speaking ahead of Sunday's march, Minister Kasapoğlu said attendees would be marching in the footsteps of the "shuhada," or "martyrs." "Our youth is aware of the sacrifice these martyrs made and together, we will carry these sacred lands gifted to us by the fallen, into the future," he said.

Kasapoğlu stated that the march, organized by his ministry, aimed to make the youth feel what those fallen soldiers felt, sacrificing as the martyrs did. He lauded the high turnout, saying: "We see people from the length and breadth of Turkey, just like the soldiers who arrived from all around the country here 105 years ago. Among the fallen soldiers were those hailing from Jerusalem, Yemen, Damascus, Aleppo and Skopje and today, we have guests from abroad joining us in this march. We believe it is important to have the same spirit and same enthusiasm for the country today," he said.