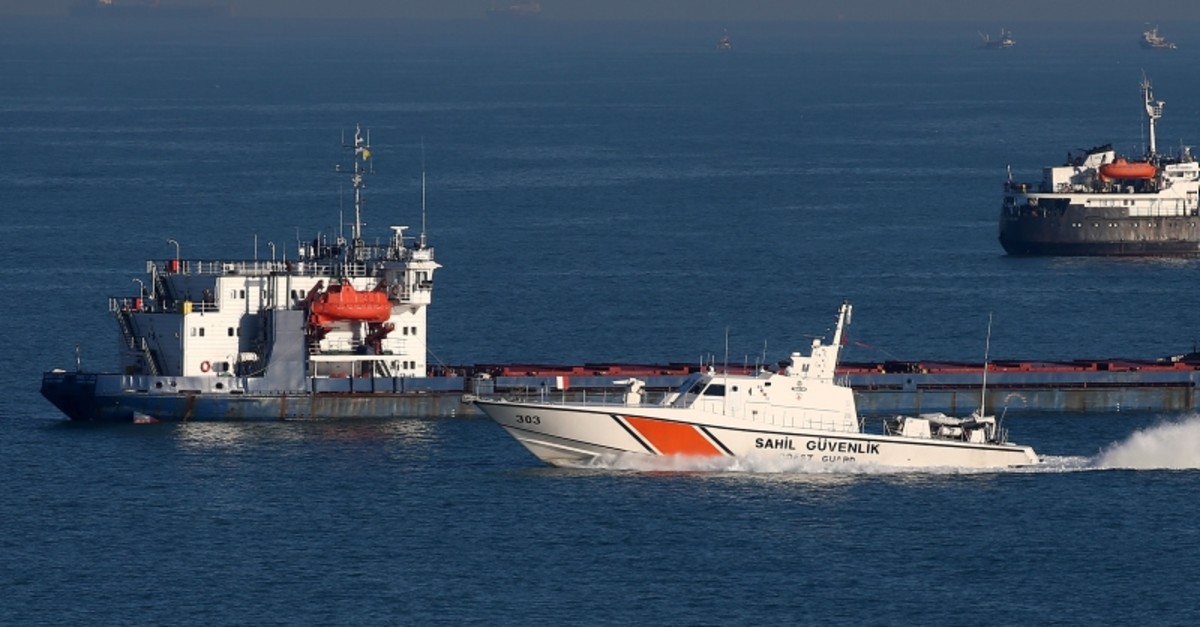 Coast guard boats searching for the three missing crew members of the sunken fishing boat, Jan. 10. 2020. (AA Photo)
by Daily Sabah Jan 10, 2020 8:44 am
Three people were killed Friday after a Turkish fishing boat sank off Istanbul's northern coast following a collision with an oil tanker as dense fog reduced visibility, hampering maritime traffic near the city.
In a statement, the Istanbul Governor's Office said the fishing boat Dursun Ali Coşkun sank after colliding with the Russian-flagged oil tanker, Glard-2 off of Istanbul's Kilyos shore, where the Bosporus meets the Black Sea.
The statement added that three of the six crew members were rescued by other fishing boats nearby, while rescue teams launched search efforts to locate the three missing.
According to Turkish Coast Guard authorities, the Russian tanker was traveling to the Aegean province of İzmir when the accident happened 5 nautical miles off the shore around 6:30 a.m.
Coast guard authorities said a helicopter and several coast guard boats were involved in the search efforts to locate the missing crew.
Moments after the incident, the Istanbul Governorate closed down the Bosporus to maritime traffic due to heavy fog.
The remains of the missing crew members were located by TCG Alemdar, the submarine rescue mother ship of the Turkish Navy. Divers and remotely operated underwater vehicles (ROV) were dispatched to the scene to retrieve the bodies.
Meanwhile, a similar accident occurred in northwestern Çanakkale's Dardanelles strait where another fishing boat collided with a ferry.
The accident occurred after the captain of the fishing boat reportedly fell asleep at the helm. The fuel tank of the ferry was ruptured following the accident and fuel began leaking into the sea.
Authorities said no one was injured in the accident and everyone on board the ferry was evacuated safely. They added that necessary measures were taken to stop the fuel leak.
Speaking to the press about the accident, chairman of the company that operates the ferry said the captain of the fishing boat was responsible for the accident.
"The fishing boat collided crashed into our ferry despite our captain repeatedly honking the horn and taking evasive maneuvers. We immediately docked after the accident and evacuated passengers and cars. Then we deployed containment barriers to contain the leak and we also transferred the fuel in the ruptured tank to a spare tank to prevent further environmental damage," Rüçhan Özer said.
Last Update: Jan 10, 2020 4:21 pm
RELATED TOPICS