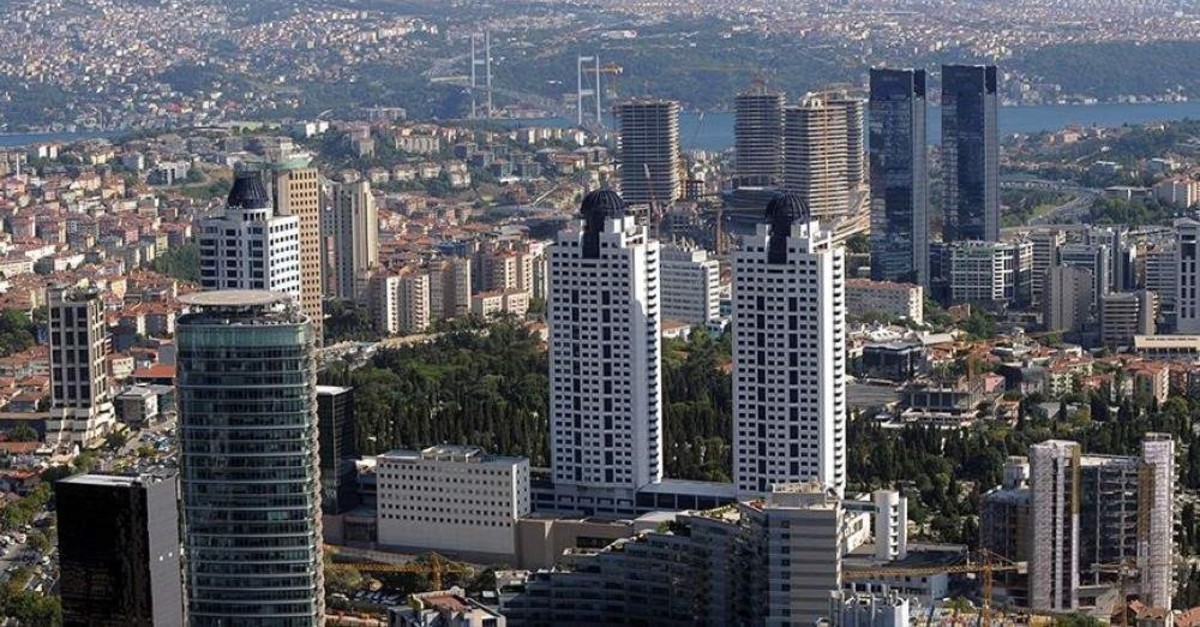 A view of Istanbul with skyscrapers in the foreground. The new bill seeks to limit the number of floors in any given area. (AA Photo)
by Daily Sabah Jan 13, 2020 9:46 pm

The ruling AK Party lawmakers have proposed a bill to Parliament in the first step toward limiting the height of buildings in a bid for “horizontal architecture.” The bill also seeks to reduce the duration of legal disputes regarding city planning

The rather cumbersomely titled "Bill Regarding Amendments to Geographical Information Systems and Miscellaneous Laws" has the potential to bring about a complete overhaul on urban development projects across the country.

A group of lawmakers from the ruling Justice and Development Party (AK Party) presented the bill to Parliament on Monday, bringing Turkey closer to realizing what its proponents call "horizontal architecture."

The bill primarily aims to reform zoning and drastically hasten the conclusion of legal disputes regarding urban planning. However, one of the most important proposals comes in the form of the limiting of the number of floors in new buildings. It will effectively end arbitrary limits imposed by local administrations, paving the way for buildings with fewer floors and halting the construction of skyscrapers, largely deemed an eyesore, especially when overshadowing the historical parts of cities.

The AK Party's Parliamentary Group Deputy Chairman Mehmet Muş, who led the lawmakers behind the bill, said at a news conference in the capital Ankara on Monday that "Buildings will no longer go up however high builders wish." The new regulations would involve "limitations in zoning plans (with) a specific height based on the approximate height of buildings in a given area," he said.

President Recep Tayyip Erdoğan is a staunch advocate of "horizontal architecture." He has often criticized tall buildings for "spoiling" the skylines of cities and repeatedly called on builders to construct buildings with fewer floors, instead of taking advantage of the limits provided by a building area by increasing the number of floors.

Cities throughout Turkey are growing at a far faster pace than rural areas, with internal migration a major factor aggravating the availability of housing. A boom in the construction sector tied to this growth has forced Turkey to have to weigh its concerns for the preservation of green space with the needs of a growing population. Critics of "vertical architecture" also complain that taller buildings where residents have limited chances to bump into one another kill the "neighborly culture" of the past where people living in buildings with fewer floors would have more common interactions and increase in familiarity.

Muş said the bill seeks to "bring urbanization to a higher level" and create "more beautiful cities." Among other changes, the bill proposes a faster legal process to speed up verdicts in cases of zoning disputes.

The amendments will also end what are perceived as "unfair" fines levied against buildings that violate building codes regardless of circumstance. Under the new bill, fines will now be imposed in proportion to a property's value. "Thus, people will not pay the same fine for having erected a building that has been constructed illegally if it is Bayburt (a smaller, rural town in the east) compared to if it has been built in Maslak (an expensive financial district of Istanbul)," Muş said. "Illegally built constructions will be demolished and their builders and owners will be fined," he added, noting that the number of fines would also be increased.