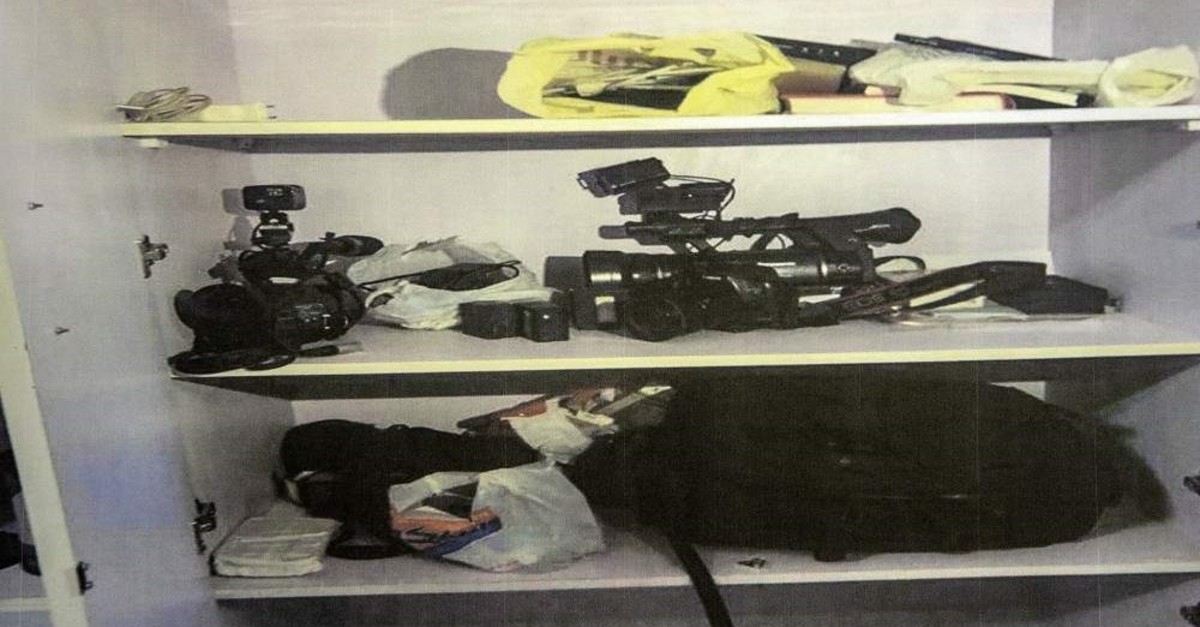 Egyptian police published photos of ,seized items,, including of cameras, from the AA office in Cairo. (AA Photo)
by Daily Sabah with AA Jan 16, 2020 3:42 pm

Egypt stirred up controversy with the detention of staff from Turkey's official Anadolu Agency (AA) and now claims it was an "operation against a troll cell."

The country's Interior Ministry said they confiscated cameras and microphones seized in the raid on the agency's Cairo office, claiming the office was spreading the propaganda of the Muslim Brotherhood, which is viewed as a terrorist group by Abdel-Fattah el-Sissi's regime.

AA, which operates as a media outlet across the world, has been operational in Cairo since 2012, but like other media outlets in Egypt ruled by the former military junta, fell victim to a media blackout in the hands of the regime.

Four of the agency's staff members, including one Turkish citizen, were arrested and taken to an unknown location by Egyptian police in the raid on Tuesday. AA said police officers stormed the office Tuesday evening, cutting off security cameras and the internet connection and searched the office until the early hours of Wednesday. Officers also confiscated the passports, cellphones and computers of staff. The officers involved refused to disclose the reason for the raid to a lawyer working for the agency. A female Egyptian journalist who was at the office was released at midnight, while four others were taken to an unknown location Wednesday morning. The detained staff members include Hilmi Balcı, a Turkish national who is in charge of the office's finance and administrative affairs department, and Egyptian citizens Hussein al-Qabbani, Hussein al-Abbas and Abdelselam Muhammad.

The Sissi regime, which came to power by ousting the country's democratically elected President Mohammed Morsi in 2014, has branded the Muslim Brotherhood as a terrorist organization.

AA's director-general on Thursday shared the details on the raid, as well as how Egyptian media framed the incident. Şenol Kazancı said the incident took place two days ago, at around 5-6 p.m. local time (3 p.m.-4 p.m. GMT), on Jan. 14.

"A group of police wearing official uniforms came to our Cairo Office via minibus. There were our five staff members at the office," Kazancı said.

Recounting that the agency's headquarters in Ankara were informed of the incident after an hour and a half, he said they later contacted Foreign Minister Mevlüt Çavuşoğlu.

"At midnight, police released one of the staff members, a woman, but four others were taken to a location we still don't know," he added.

Kazancı said the agency had not been able to contact Egyptian authorities at this time and were unable to confirm the incident even took place. Noting the immense support received from Turkey's presidential office, as well as all the country's political parties, the agency's colleagues in the news media and the Turkey people, he said several international organizations also called for the release of the journalists, condemning the incident. No statement from the Egyptian Interior Ministry has been made so far, Kazancı said, but news about the raid was leaked to the press from the ministry on Wednesday night.

The Istanbul-based Media Association, a leading nongovernmental organization of journalists, was among those condemning the incident. The association said that they fear for the employees' lives.

"The track record of the putschist Egyptian government increases those fears," it said in a statement.

The Media Association also stated that the Egyptian authorities are rejecting calls for information regarding the situation of the employees.

"The Egyptian authorities should apologize to the families of the abductees. Our association will bring forth this issue in international platforms and follow the case to the end," the statement added.

European Union also released a statement later in the day. The bloc said that they are "following the developments" regarding Egypt's arbitrary arrest of Anadolu Agency journalists, and reiterated that "all professional journalists should be able to work without obstruction."

Kazancı said a story published in the Egyptian media described the AA office as a "terror cell house" in its headline. Similarly, the Egyptian Interior Ministry shared photos of seized cameras and other materials used for journalism on its Facebook page and claimed they were "items seized in the cell house," ignoring the fact that the agency was operating legally in the country. Kazancı added that the report covered the incident "without calling it (the office) a news agency or mentioning the journalists." Saying the incident was "saddening," Kazancı stated, "Police shared one photo with the media, showing gas masks that our reporters keep as a precautionary measure as if they were offensive tools that were seized and as if it was an illegal organization."

One photo shows technical tools including cameras inside a wardrobe while another photo shows an AA flag and another shows only a Turkish flag, Kazancı said. He added that the reports in Egyptian media also stressed that the AA staff, three Egyptians and one Turkish national, were arrested for being members of a terror group without mentioning that they were journalists.

Metin Mutanoğlu, AA's deputy director-general, said they have received information that their detained staff members were interrogated by Egyptian prosecutors.

"Now, we received the news that our colleagues were investigated by Egypt's prosecution office," Mutanoğlu, who is also the editor-in-chief of the agency, said Wednesday in a live broadcast on the local TRT News channel.

Mutanoğlu said that Egypt's official news agency accused AA and its workers of reporting fake news and working against the interests of Egypt, according to the information it received from Egypt's Interior Ministry.

"We understand that they have detained our colleagues with nonsensical claims. This is a new development," he said, noting that Egyptian authorities have not responded to any of the initiatives by the Turkish Foreign Ministry following the raid. "According to this new statement, they made an explanation that an investigation is carried out with a claim that AA is against the national interests of Egypt and that it displays a bad image of Egypt to the outside."

He noted that Egypt has done the same thing to the media outlets it wanted to silence, adding it closed down many local and foreign media outlets.

"They are doing the same thing to us," he said.

He emphasized that AA is a very prestigious news agency in the Arab world "because AA is known for its impartiality." "It is known for the in-depth content in its news. It is known for making all parties speak," he said. He noted that Egypt's presidency had been a subscriber of AA until a few years ago.

"This is a piece of important information," Mutanoğlu said, adding that the agency is not concerned with the interests of Egypt. "We are a media outlet and we, of course, have a duty to report the events taking place there as they are."

Speaking on the claims of a lack of documents, Mutanoğlu said, "We are an institution which has always kept complete documents and received accreditation until the 2013 (military coup)." He adding that their applications are kept on hold by the Egyptian administration, which has not rejected nor accepted them.

"They say 'You can work,' but they do not formalize it and leave it like that," he said, adding that the agency's office has been operating there for eight years and each year it completes all necessary paperwork.

"Egypt's administration never approached us for accreditation. This is not just about us; they do this against all foreign media," he noted.

He said two years ago, AA offered Egypt's news agency to work together and develop and improve Egypt-Turkey relations and the offer was welcomed. He noted that today there is a putschist administration in Egypt that silences all voices that speak against it. "Therefore, the fact that they did not give us a license in this sense does not prevent our work," he said, adding that the agency pays its taxes to Egypt without any delay as well as the taxes of the workers.

"But they have been against Anadolu Agency and all other foreign media since the day of the coup," he said.

Çavuşoğlu said Wednesday that the raid was "unacceptable." Çavuşoğlu went on to say that President Recep Tayyip Erdoğan suspected Egypt was "resentful" of ُTurkey for seeking to open an international investigation into the death of former Egyptian President Mohamed Morsi and because of its efforts with Russia for a cease-fire in Libya. Morsi, who was removed from power in Egypt during a military coup in 2013, died during a trial session on "espionage" charges last year. On Jan. 12, the warring sides in the Libyan conflict announced a cease-fire in response to a call by Erdoğan and Russian President Vladimir Putin, gathering Monday in Moscow to sign an agreement aimed at ending hostilities and starting a political dialogue.

"Western countries, who try to teach everyone about human rights and freedom of the press, lose their voice when such things happen in countries they can manipulate. The whole world would rise up if a similar case occurred in Turkey," Çavuşoğlu added.

Earlier, the Turkish Presidency's communications director, Fahrettin Altun, said, "This hostile act by Egypt's coup administration toward Anadolu Agency staff displayed how low it can stoop. We condemn this hostile practice by Egyptian authorities toward the Turkish media."

Egypt, under the regime of el-Sissi, who seized power by ousting President Morsi in 2014, has seen deteriorating press freedoms. In November 2019, Egyptian security forces carried out a similar raid targeting the office of independent news website Mada Masr and briefly detained three of the website's staff. Earlier, the United Nations' human rights office urged Egypt to free a blogger and a journalist who were among several thousand people detained following protests against the el-Sissi regime in September.

Daily Sabah also had its share in the Egyptian regime's crackdown on the press when its website was blocked in 2017. The newspaper thus joined several news outlets critical of the regime, which eventually faced a media blackout with a ban on access.