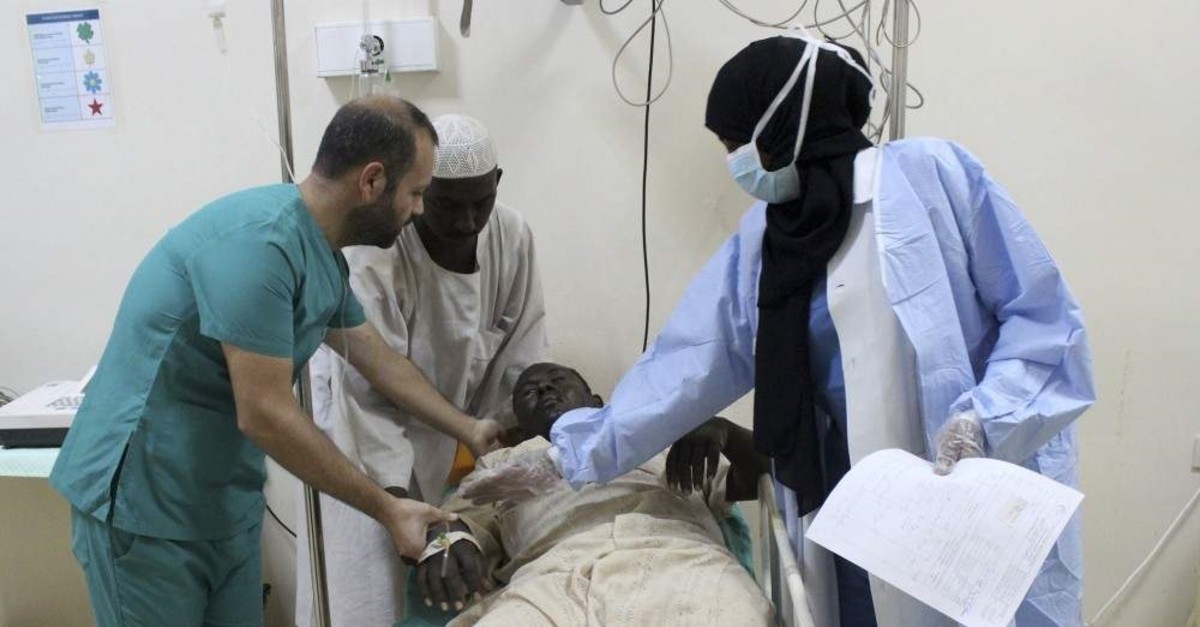 Proving itself as one of the pioneers of the health sector within the last 10 years, Turkey has reached out to various corners of the world, aiming to share its knowledge while providing health care for the needy

As a country that successfully transformed its health sector within a decade, Turkey does not hesitate to share its experience on the issue with the world by providing health care services in various countries. Specifically aiming to reach out with a humanitarian approach to the areas most in need, the country is getting ready to launch three more hospitals in Libya, Palestine and Kyrgyzstan in 2020, which will increase the number of Turkish hospitals abroad to 12.

Known as "Turkish Friendship Hospitals," Turkish health facilities have been operating mostly in Syria and Africa for almost a decade now, treating thousands of patients lacking proper health care within their countries. Some of the areas where the hospitals are located are Syria's liberated northern provinces of al-Bab, Azaz, Jarablus, al-Rai and Mare, as well as countries like Niger, Somalia, Sudan and Bangladesh. The hospitals usually have a capacity of 500 patients each. In Somalia, for instance, 20,000 patients have been checked in each month, while 6,000 have been treated and 100 surgeries have been done. Tubas Turkish Hospital, on the other hand, which is located in the city of Tubas in Palestine's West Bank region and is the first hospital in the city and provides services for 40,000 patients each year. Currently, in Syria, there are seven Turkish hospitals, 21 health centers, 237 expert doctors, 78 doctors, dentists, pharmacists and 633 nurses, operating alongside the Syrian personnel. The Turkish hospitals in the war-torn country have the capacity of hosting approximately 400 people in total.

Apart from these aforementioned projects that are completed or partially completed, there are also projects ahead expected to be completed in the upcoming period. According to a recent statement from Health Minister Fahrettin Koca, six contracts for the establishment of the hospitals abroad had been signed so far, including a contract with Romania, which has now been concluded. He added that a total of 15 hospitals are expected to be built abroad through bilateral cooperation. Koca also said that, along with European countries such as Hungary, Romania and Ukraine, countries further afield, such as Kazakhstan, Pakistan and Uzbekistan have requested the help of Turkey to establish health institutions using the same public-private partnership model employed around the country.

A major transformation in 10 years

Turkey has not always been a shining example for other countries when it comes to its health care facilities. As a matter of fact, long lines as well as unhealthy environments in the hospitals are not-so-distant memories for the Turkish public. These types of scenes were typical before 2003, but Turkey's health sector has seen a transformation over the past 10 years.

In recent years, Turkey has taken steps to rejuvenate the once crumbling health care system. Hospitals run by the Health Ministry and Social Security Fund (SGK), formerly known as the Social Insurance Fund, were merged to prevent overcrowding in the latter. The government also cut the red tape by treating patients with social security at teaching hospitals.

These large hospital complexes provide services in a diverse range of medical specialties not available in other hospitals in many cities. To ensure the quality of service, the government has adopted a public-private partnership model for the construction and operation of the complexes. The city hospitals are being leased to private companies and the government only pays fees for medical imaging, laboratories, security, maintenance and health care workers' salaries.

Today, many pundits consider these developments to be among the most successful of middle-income countries undergoing reform, proven by numerous articles that have been published on the issue, stating that significant progress has been achieved. For instance, in 2003, Turkey had the highest rate of child mortality among developed countries. However, by 2013, thanks to the reforms, the country halved the number of deaths in children under five.

According to the country's First Lady, who addressed this transformation at a high-level meeting of the World Health Organization (WHO) in Geneva on May 21, 2019, the main reason behind this successful change was the fact that Turkey has embraced a "people first" approach.

"We gave importance to efficiency, accessibility, sustainability and quality to improve patient satisfaction. I can gladly express that Turkey has a success story on global health comprehensiveness," Emine Erdoğan said.

Apart from the health facilities that were updated in accordance with the needs of the locals, Turkey also proved itself in providing well-rounded care for the refugees being hosted. Currently, the country has 180 health centers for refugees, mostly in provinces where they predominantly live. While 410,000 Syrian children were born within the last eight years, 1.5 million Syrians received medical services and 1 million of them had surgeries.

Soon after Turkey proved itself in the health sector, the international community started to see the country as a desirable destination for health tourism. Today, the Turkish health sector offers services on par with Europe and the U.S. but at more affordable rates. As a result, in 2019, the country enjoyed a 30% boost in its health tourism.

"Last year, Turkey hosted 553,000 foreign patients. This year, we have welcomed 650,000 patients in 10 months. We expect the final number for 2019 to be 760,000. Our goal is to generate $10 billion by reaching 1.5 million patients by 2023," Koca said in December on the issue. According to the Turkish Travel Agencies Association (TÜRSAB), foreigners visiting Turkey for health tourism spent on average $2,013 per person in 2018, nearly three times more than a regular tourist.

In the meantime, alongside health tourism, Turkey gradually started to expand its knowledge on the matter to the far corners of the world with an aim of reaching people in need, especially the victims of conflicts.

Apart from building modern hospitals in numerous countries to provide access to health services for hundreds of thousands, the country has been providing vocational training to local medical staff and sending doctors to conflict and disaster zones as well as to impoverished communities to carry out urgent medical operations. As part of 43 Health Weeks, organized in 20 countries on three continents, to perform medical operations for people who cannot afford treatment for different reasons, 4,000 surgeries were carried out and vocational education was given to 5,000 foreign medical personnel. Turkey also signed 153 agreements in the medical sectors of 78 countries.

The Turkish Cooperation and Development Agency (TİKA) played a pivotal role in Ankara's efforts to reach different regions. The agency opened a 200-bed training and research hospital in Somalia's Mogadishu in 2015 and built one of the region's most well-equipped hospitals in Sudan's Nyala in 2014. Also, a field hospital in Bangladesh's Cox's Bazar has been providing medical services to thousands of Rohingya refugees who fled Myanmar since it was first established in 2018 by Turkey's Disaster and Emergency Management Authority (AFAD) with the contributions from the Health Ministry.